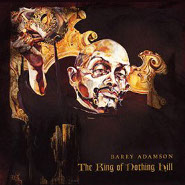 Barry Adamson goes out of his way to produce an ever-growing body of work that isn’t likely to sit on any single record shelf — from his literate, post-punk rock’n’roll as a member of Nick Cave’s Bad Seeds, to his atmospheric soundtrack commissions (Last of England, Delusion), to his own self-motivated studio experimentation (best exemplified by The Negro Inside Me). His new album, The King of Nothing Hill (Mute, 9/3), is as frivolous and frothy, as funky and, largely, joyous, as some of his past records have been chin-strokingly circumspect. With a collection of musicians seemingly larger than those of Ray Charles’s and James Brown’s bands combined, he sings and talks his way through ten scenic slices of moody, mid- and uptempo swagger, all of which could fit comfortably under the umbrella provided by the name of the album’s opening cut, “Cinematic Soul.” On “Whispering Streets” a voice repeatedly intones, “Welcome to the ghetto,” while threatening sounds whip from your speakers. On “Black Amour” he tries on the threads of a fellow Barry — White, that is — and embraces a heavily perfumed brand of orchestrated loving. There are nods to contemporary music, such as the drum’n’bass backing percussion on “When Darkness Calls.” But Adamson is more likely to dig deep in the past, as he does with the slowly swinging horns of “That Fool Was Me”; on “Le Matin des Noire,” buoyed by a sample of John Coltrane and Archie Shepp, he starts by noting the classic films that have contributed to his vision of Paris. Fans of Adamson’s immersive screen recordings will delight in the album’s penultimate track, “The Crime Scene,” which plays like a mini radio drama, jumping from incident to incident and incorporating street sounds and voices. It’s a thrilling ride.