Not all sound art makes sound. Not all art about sound is sound art — a cubist take on a guitar, for example, may not quite constitute a formal comment on music. But Diana Al-Hadid‘s “Portal to a Black Hole,” a massive freestanding sculpture that stood at the Tanya Bonakdar Gallery in Manhattan until August 17, was formidable all the more for its foreboding silence. 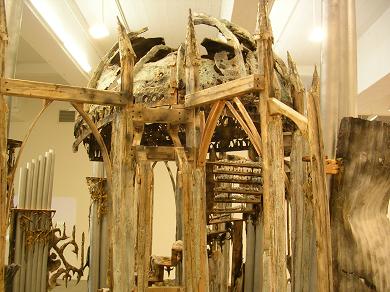 Though called a portal, the piece more closely resembled its opposite: a gate constructed of organ pipes, massive and firm, within which were keys of some fantastic instrument, arrayed like a spiral staircase. Whether it leads up or down is up to the viewer. The structure brought to mind salt encrustations, fantasy films, barnacle accretions — all in all, a Boschian worldview. She’s pursued similar themes in pieces such as “A Measure of Ariadne’s Love” and “Spun of the Limits of My Lonely Waltz.” 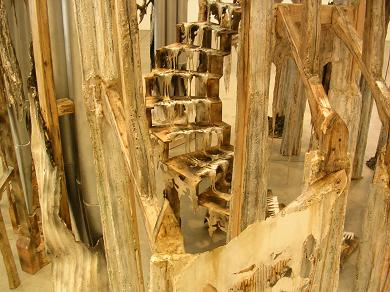 The Al-Hadid was part of an exhibit titled “Agitation and Repose,” curated by Sabine Russ and Gregory Volk. I was fortunate enough to visit the week before it closed. Other works included a wall of exquisitely detailed mechanisms by Claire Watkins and a topsy-turvy architectural faux-folly by Via Lewandowsky that involved two prefab homes grafted into one and served as an antiseptic contrast to Al-Hadid’s construction.

Though her portal stood silent, silence was not the rule; sound bled in from several video pieces, including a nearby room of six screens by Roman Signer in which the central player was a toy helicopter, its whir cycling like robot bugs.

More information on the gallery at tanyabonakdargallery.com and on Diana Al-Hadid at al-hadid.wsdia.com , vcu.edu and priskajuschkafineart.com. By the way, that’s a Jon McCafferty abstract landscape painting in the background on the left of the image below; his topography-derived work finds a common ground between impressionist and technologist. 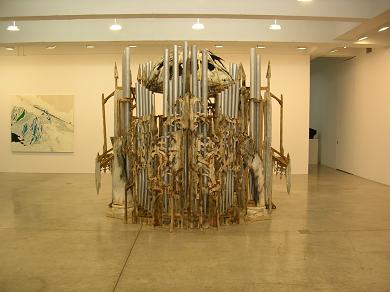