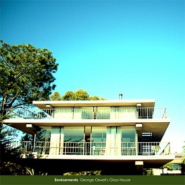 The coast is noisy. The wind rattling against the microphone just adds to the cacophony (MP3). There may be a chime in the distance, as well as a dog barking, and the overall effect is a feeling of the absence of humanity — that you’re alone in the world.

The mode is Orwellian, though not in the traditional sense. “Orwellian” brings to mind visions of surveillance, as well as the claustrophobic embrace of bureaucratic tyranny. Here, in this MP3, the sound is literally Orwellian, for it was recorded near the former Isla Vista, California, home of the late George Orwell, author of, among other things, Animal Farm and Nineteen Eighty-Four.

The release, titled George Orwell’s Glass House, is credited to Environments, which consists of Will Long and Danielle Baquet-Long, both members of the group Celer. As the brief liner note to Glass House humorously states, “The recording was made in between the house (front cover [pictured above left]) and the ocean (back cover).”

Perhaps the metaphorical Orwellian overtones aren’t so much inappropriate as they are redundant. In our world of layperson geocoding (see Orwell’s home, via satellite imagery, below), there’s nothing particularly eerie about the mix of trespassing, both physical and metaphysical, inherent in this venture. 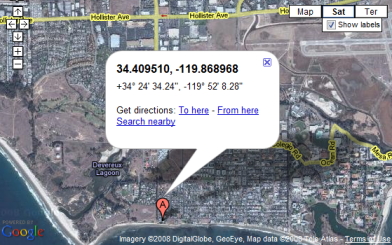 Get the full release, including album art, at the restingbell.net netlabel. More on Celer at artificialcolors.blogspot.com.