There’s a large, geometrically accomplished, bright white room on the top floor of the Contemporary Jewish Museum in San Francisco. To inaugurate the Daniel Libeskind-designed museum’s opening last year, John Zorn was invited to curate a series of recordings to be played in that room, on a rotating schedule: The Aleph-Bet Sound Project. Other than a few benches, some explanatory documentation, and the bodies of fellow museum-goers, nothing else is in the room, the Stephen & Marielle Leavitt ‘Yud’ Gallery (reads the CJM website, thecjm.org: “65-foot ceiling … 36 diamond-shaped skylights”). If there is a distinction to be drawn between sound art and sound as art, this is arguably the latter. 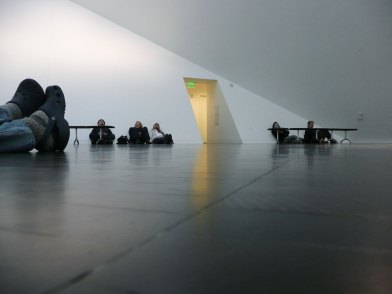 I’ve entered that spacious, THX 1138-style room twice, the second time this past Sunday, January 4 (that had been the scheduled closing day of the event, but it’s now been extended through February 1). I was returning largely because the Alvin Curran piece wasn’t on the rotation when I’d first visited, shortly after the museum opened to the public last year. 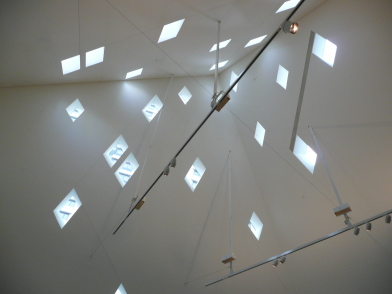 I arrived on Sunday in time for the work by New York sound couple Marina Rosenfeld and Raz Mesinai, early enough to be greeted by the closing vociferous clanging of z’ev‘s “For Lillith,” which played like endless encompassing circles of infinite, rusty old cymbals, colliding into each other way up in cymbal heaven. The Rosenfeld-Mesinai piece, “Tzadik ’00” (Tzadik is the name of Zorn’s record label), opens with a prayer bowl sound, and then veers into digitized clamor, with spoken syllables ever so lightly digitized, just barely beyond verbal recognition.

A measure of the collective work’s variety, the Rosenfeld-Mesinai ended in time for “Tell Me That Before” by David Greenberger, whose ongoing Duplex Planet project — in zines, on CDs, in performance, and in other formats — collects the musings of elderly Americans. “Tell Me That Before,” with its hazy recollections of childhood in Baltimore, among other subjects, didn’t disappoint. Most of the monologues were backed by a mix of piano, bass, drums, and a mallet instrument. That the anecdotes were often accented with precisely placed notes cemented the work as a proper composition. The final segment featured birdsong and maudlin violin as an aural backdrop.

Out-jazz cellist Erik Friedlander‘s “50 Gates of Understanding” contribution to the Aleph-Bet Sound Project was reminiscent of much of the Tzadik label work he has recorded: modal jazz settings for heady, whirling improvisations on indelible themes. Friedlander’s is a sound that is at once deeply old world and of the moment. (The corner of 3rd Street and Mission in San Francisco has provided a second home of late to Friedlander; his father, the great gestural photographer Lee Friedlander, last year had a major career retrospective at the nearby SFMOMA, at which the younger Friedlander performed a concert.)

Each work in Zorn’s Sound Project takes as its cue a letter in the Hebrew alphabet, the mystical root of the Kabbalah. Yud, the name of the gallery, is one of the letters in the alphabet, and an instructive note on the wall provided a primer on the inner meanings of the characters. At the entry to the museum, in the lobby, there’s a kof, pictured below, on the floor: 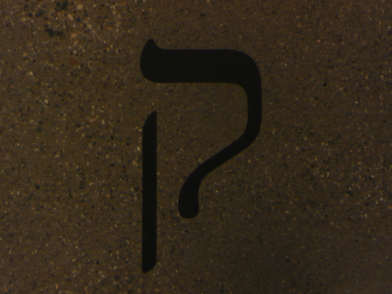 That’s the letter selected by Laurie Anderson for her piece, “Kof: I thought I closed the door,” which employs “holosonic audio technology” so that you can only really hear the piece if you’re standing directly on the paperback-size kof on the floor. The piece was louder than it had been during my previous visit, which is to say it was entirely audible, Anderson’s familiar dry delivery amid field recordings and digital effects.

Upstairs, the Curran finally came around to its place in the program, and like each piece in the show, it had its evident roots in Jewish aural culture. Titled “Shin ‘far’ Shofar,” it opened with the blowing of the title instrument, the shofar, an animal horn that emits a deep, resonant bellow that suggests a distant cry. Soon it was followed and joined by halos of by high-pitched overtones, which gathered in intensity. Those tones played push and pull with the shofar, before a heavenly chorus of ahs joined in, along with tapes of singing, first a man’s, then a woman’s, and then a fugue-like setting that found a balance between them, before the shofar sputtered into silence.

The shofar gave Curran’s the most self-evident liturgical vibe of the set, though each, in its own way, employed cultural cues, from the prayer bowl in the Rosenfeld-Mesinai, to the Eastern European holiday-party music of the Friedlander. The room’s expansive whiteness provides an almost self-consciously ethereal quality, and despite its odd shape, there was no awkward echoing or other sonic imaging. That said, the music could have been louder — it never achieved a truly immersive environment, and even the Friedlander and Greenberger at their most exuberant couldn’t drown out the clunk of the parade of fancy Sunday-go-to-museum shoes. The Yud gallery has several lengthy benches, but most visitors chose to lean against the walls, which pitch back about 40 degrees, allowing for a restful, if not entirely reverent, posture. 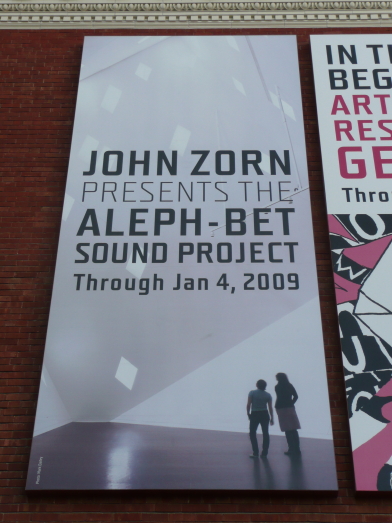 John Zorn’s The Aleph-Bet Sound Project closes on February 1, just in time for another music-themed enterprise. On February 6, the museum opens Jews on Vinyl: And You Shall Know Us by the Trail of Our Vinyl, which covers Jewish records from the 1940s through the 1980s, ending, as the exhibit’s promotional text jokes, “with the holy trinity of Neil, Barbra, and Barry.”