There are, among the wall-hung instructional art, and the decorative ceramic hands, and the collage constructions, and the ambiguous paintings, two small televisions on two small pedestals at the Michael Rosenthal Gallery on Valencia Street in San Francisco.

The current group show at Rosenthal is titled The Big Three, and the two small televisions each loop a brief video, one by Lauren Lavitt and one by Sara Blaylock.

Both videos show kaleidoscopic imagery, and both are backed by a melange of quiet music (each TV has a pair of headphones), and both televisions are set against a wall on which a fixed image gives some representation of what is on the screen. The two photographs directly below, borrowed from the Rosenthal Gallery site, show the Blaylock (top) and Lavitt (bottom), in situ: 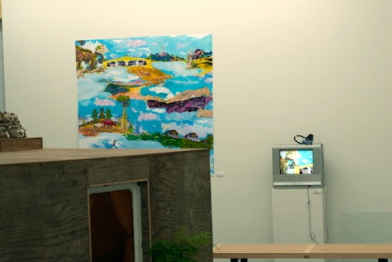 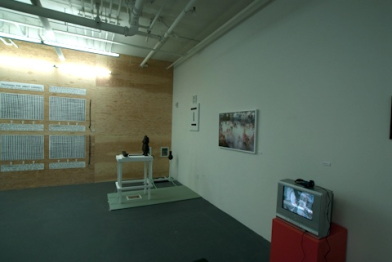 Neither framed image is a true still. The Lavitt shows cut ups of what appears to be a female figure in various acrobatic poses, the face unclear, and the body diced as if it had been pieced together from other images — the body equivalent of a half-finished ransom note. On the small screen, similar segments of the human form travel with too much viscosity, with too much affect, and too rapidly, to be as discernible as the same ones on the wall, but to see them both — the video and the framed print — in the same place is to know they are of similar origin. The title of the work is “Blackout Treatment 1.2” (and while it’s of no consequence, I can’t help but mention that I believe it’s the first piece of art I’ve seen this year that is dated 2009). This is a detail of the still image: 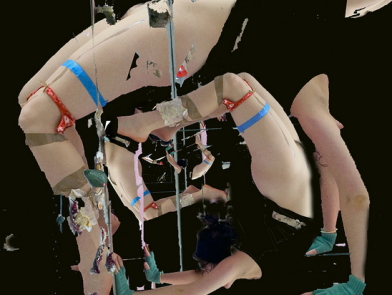 The Blaylock wall print is an over-sized depiction of rural and city imagery, the placid — all alpine hillsides and somnolent wildlife — trumping the urban, which is marked by physically diminished apartments and straining satellite antennae. The colors are garish, and lovely for their garishness, the digital equivalent of paint-by-numbers. The televised image — like the Lavitt, it is delivered via DVD — appears to pan around the large-scale image, focusing on elements, and drawing attention to what, on the wall, might be subsumed in the breadth of landscape. The title of the work is “A Land That I Heard Of” (2008).

The sound in the Lavitt is soothing and epic — a mix, the artist informed me later via email, of Eog, Sigur Ros, Terry Riley, and some sounds of her own creation (she plays in a band with the excellent name Jacked Up Blazer, which is performing at the Silver Lake Lounge in Los Angeles on January 20). Any of those elements would have provided a suitable salve to the confusion and heightened visual activity in Lavitt’s work, but the combination is certainly stronger, and more elusive, than any individual item would have been. Both the video and the sound that accompanies it are built from small things.

The sound in the Blaylock is, likewise, a combination of pre-existing elements. According to Blaylock (again, thanks to email correspondence), there’s some droning music by Phil Kline (the composer, perhaps best known for his annual, global sound-art event, Unsilent Night), and a variety of field recordings sourced from freesound.org, a website that will be familiar to anyone who’s a regular visitor to Disquiet.com. There are more than a half dozen such samples in all, ranging from wind, to a Japanese festival, to a chorus, to a tabla credited to RHumphries (who has, by coincidence, twice been listed in the Disquiet Downstream section of recommended free MP3 files). As with the Lavitt, Blaylock’s video benefits from a somewhat lulling audio accompaniment, though in the case of “A Land That I Heard Of” — especially in how the very title brings listening to the foreground — the realism of those field recordings can’t help but be heard as a framing construct, a further critique, of the artificial beauty examined in the video.

If you’re not in San Francisco, you can see Blaylock’s video at her website, sarablaylock.com. Lavitt’s website is laurenlavitt.com. Visit the gallery’s site at rosenthalgallery.com. The exhibit opened on January 10, and it runs through February 11.