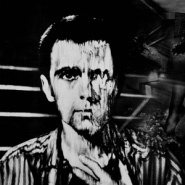 There are many songs and compositions and full-length recordings that serve as major precursors to electronic music’s full flowering in recent decades, and strong among them is “Games Without Frontiers” by Peter Gabriel. Its thick yet restrained synth chords, super-minimal beat, and futurist lyrics stood out in 1980, when it appeared on Gabriel’s third solo album, for their technological rigor, and in retrospect suggest themselves easily for later remixing. That is now not only possible, but encouraged, as Gabriel has provided 36 individual parts, from guitar intros to Kate Bush‘s backing vocal to the whistling bridge to the wombling bass line, as part of Real World Remixed, which opens up the archives of Gabriel’s Real World studios for amateur noodling. As with past such projects, like the one Brian Eno (who worked on Gabriel’s final album as a member of Genesis, The Lamb Lies Down on Broadway) and David Byrne did for the anniversary of their My Life in the Bush of Ghosts, the parts are often just as listenable as the whole, especially the Africa-tinged rhythm, and a special remixed drum track by Lord Jamar that was put together for a recent X Games promotion. Participants can upload their renditions as part of a competition.

Previous Real World Remixed competitions have featured music by Dub Colossus, Dengue Fever, Los de Abajo, the Afro Celt Sound System, and Little Axe. Gabriel’s own “Shock the Monkey” (“one of the first tracks to use sampling technology utilizing the ground breaking Fairlight CMI and and other classic machines such as the Linn Drum and the Prophet 5 synth”) was the fourth “pack” in the series. “Games Without Frontiers” is the 13th.

Sign up for free at realworldremixed.com to get the raw goods, as MP3s and as generously uncompressed WAV files.