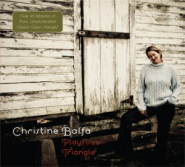 The New York Times’s music critic Jon Pareles wasn’t joking when he wrote up an album of solo triangle this past Sunday. Christine Balfa Plays the Triangle is exactly that, a baker’s dozen of cajun classics played on nothing other than a bent piece of metal. One full track is available for free download, a willfully monotonous “The Balfa Waltz,” in which the triangle, closely mic’d, has the metallic resonance of a distant cowbell (MP3). On that track, there’s also some yelping punctuating the goings-on, a kind of half-mumbled hog call. It’s rhythm, pure and simple. The persistence of the triangle is downright trance-inducing, and worth a listen.

As for the releasing label, Valcour, it’s unclear if it’s doing this as a joke or not. The write-up at the label’s website, valcourrecords.com, describes the CD as “the perfect gag gift,” but an appended note by musician Dirk Powell, for all its deadpan delivery, has a ring of truth to it. He writes:

An undeniable need to express the sounds she heard around her without limitation — mama stirring coush coush in the pan, cowbells tinkling as the herd came back in for the night, daddy grinding the school bus gears in the morning — became the dominating force in her life. This CD realizes, at long last, her vision of liberation for the instrument. Unfettered by melodic or harmonic content, she can finally tell her story, and the story of her people, to the world.

It may all be a joke of sorts, but I for one eagerly await the remixes. I couldn’t help but think of Balfa’s spartan triangle while listening to the lonesome waveform that gets transformed over the course of the Brian Biggs track I posted about yesterday (disquiet.com).