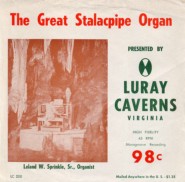 Steve Roden makes music from fragile artifacts, in a modest manner that suggests an environmentalist’s concern with sustainability, and with an appetite that marks him as a veteran of thrift stores and online auctions. The posts on his website, inbetweennoise.blogspot.com, generally single out objects of the past, not just sound-emitting devices, but fragments and images related to sound and perception. Among the most recent is a 98-cent seven-inch record album featuring one Leland W. Sprinkle, Sr., on the Great Stalacpipe Organ, a resonant device if ever there were one — playing all manner of standards, each note taking on an ever-deeper quality due to the depth of the Luray Caverns, in Virginia, where the recording was made (MP3). The accumulated scratches on old vinyl such as this can often be mistaken for a gentle rain, and in this case that’s not far from the truth; according to record’s narrator, the soudn does include “a delicate percussion section”: water dropping in the cave.

it is nice that the luray folks mentioned the natural dripping sounds in this recording on the sleeve, because it is a rare breed of instrument that can only be recorded as a field recording, not because of social reasons such as with rural or ethnographic recordings, but because the instrument itself exists in the world and is built of the world, and can only be heard within its natural soundscape.

Fans of Pauline Oliveros and Deep Listening will especially enjoy this material.