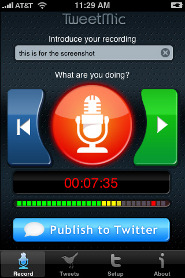 As if 64 kbps MP3 files weren’t enough to make audiophiles want to slash their wrists with a turntable stylus, along comes tweetmic.com. It’s an ingenious little Apple iPhone/Touch app that allows anyone — well, anyone with the appropriate Apple gadget, and $.99 for the application — a simple way to record audio on the go, and to upload that sound to the web. For the time being, the app (and its complementary website) is mostly a place for Internet celebrities to leave the equivalent of throaty public voicemail messages, but some people, like Richard Lainhart, are using TweetMic with soundscapes in mind. It was Lainhart’s Twitter entry yesterday (at twitter.com/rlainhart) that first brought TweetMic to my attention (his TweetMic page is at tweetmic.com/p/ou7nfanfntn). A brief mention by him of “The sound of my world – night insects” followed by a link led to a brief recording of distant insectoid static, that ruffling white noise whose monotony and uniformity suggests some vast hive of activity (MP3). Field-recordists, start your iPods…

The TweetMic site has a long way to go (as far as I can tell) in terms of searchability, geocoding, and community, but in terms of bare-bones functionality it’s off to a strong start. And more on Lainhart at otownmedia.com.