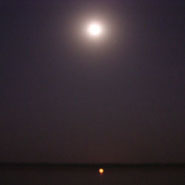 Field recordist Mike Hallenbeck knows that the sounds documented by phonographers — by those who tape and collect the noises of the natural and the built worlds — are both unique and interchangeable. He knows that a car horn in one country is just that country’s version of what is heard, however slightly differently, in numerous, in countless, other countries. And he also knows that despite that interchangeability, in fact because of it, each car horn is all the more special. As he jokes in the liner notes to his recent album, Just Before Diwali – Field Recordings from North India, “The art of field recording needs another recording of trucks in the street like I need a hole in my head, but I found this particular sonic situation valuable.”

This situation in question is the Karol Baugh district of Delhi, and the recording was made on a trip during which Hallenbeck taped the dozen tracks that comprise Just Before Diwali, which was captured all around North India. The traffic that resounds here (MP3) is just as rambunctious as one might imagine — a mix of rough bells, heavy tires, mumbling motors, and barking exhaust systems. And to the ears of someone who has never been to India, its most distinguishing factor is the melody (really less the melody than the key) hinted at in the intonations of bleeping horns.

Get the full set at the releasing netlabel, wanderingear.com. More on Hallenbeck at juniorbirdman.com.

One thought on “Delhi & the Cultural Intonation of Horns (MP3)”