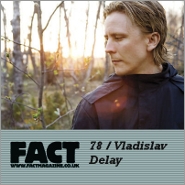 The sum of our influences — by some accounts, that is what we are, perhaps all we are. In the realm of DJing and remixing, this philosophical conceit is all the more a received if still contentious notion. This week, the Disquiet.com “MP3 Discussion Group” is focusing its collective antennae on the recent album Tummaa by Vladislav Delay, the accomplished Finnish musician known for his minimal techno, and increasingly for other things, often percussive and improvisatory, rough-hewn and beat-minded — an expanded variety that makes the longtime listener wonder just what it is Delay listens to. Late last month, perhaps in the hopes of answering just such a question, Delay contributed a mixtape to Fact magazine, and while the download is still available, by all accounts it won’t be for long (MP3).

And long it is, almost 150 MB of everything from Tricky‘s trip-hop, to the rap of Wu-Tang Clan and Snoop Dogg, and much much more, including a closing piece by Delay himself, under his Luomo moniker.

And this being a proper mixtape, and not just a celebrity playlist, the hour-plus worth of tracks are seamlessly mixed into one. For serious Delay fans, the most flavorsome moments will occur at the transitions between tracks. We may, indeed, be the sum of our influences, but that’s just the point — it’s at the juncture between tracks, the moment when they touch or overlap or are separated by a brief but momentous void, that a DJ creates a new thing, a sum that is more than merely the total of its constituent parts. 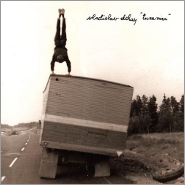 The Beauty of the Tape Cassette

This stunning photo-illustration accompanied a piece by Amos Barshad in the September 20 issue of New York magazine, on the subject of the Brooklyn-based record label Woodist, which is one of a growing number of companies bringing the cassette tape back into circulation: 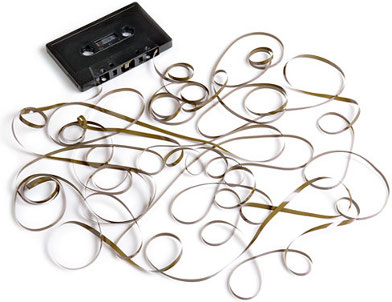 The photo, by Hannah Whitaker, is just stunning, arguably as great a tribute to the beauty of the cassette tape as is the music on Woodist. The piece brought to mind nothing so much as the hallucinogenic filigree of the late illustrator Al Hirschfeld; truly, my first instinct was to look for his “Ninas” in it. The photo captures the fragility of the tape itself, and the cold solidity of its hard plastic cartridge — and the fin de siÃ¨cle flourishes pun visually on the recording material’s past glory.

Original article, with a larger version of Whitaker’s image, at nymag.com. More of her work at hwhitaker.com.

Philly hip-hop producer WHY?Arcka has uploaded one of his strongest beats yet, the elegant dissection of rhythm and soul that is “Street Walkin’ (Gone).” The track has been entered in as Exhibit G at arckatron.bandcamp.com, his ongoing A-to-Z of abstract instrumental beats, deeply felt crate digging, and all around metric ingenuity.

As is WHY?Arcka’s mode, he takes a small slice of a pre-existing song — nowhere near as nanoscopic as would be an experiment in granular synthesis, but neither is it as reductive as a P. Diddy pop production — and inspects the fragment until it yields something akin to a funky piece of conceptual art.

The track opens with a quick loop, all rhythm and moan, a moan so sublimated it might be mistaken for a nuance to the bass line, which is exactly what it becomes as “Street Walkin’ (Gone)” takes shape. Then comes a smattering of guitar, hinted at before it’s allowed to be heard fully. And then the vocal, a tantalizing snippet of the song’s title. And then the whole thing goes into breakdown mode, even more spare than at the opening, a slim mash of beat and vocal, allowed to go about its own staunch business.

Forgive the play-by-play appreciation, but this review is really just mimicking exactly what WHY?Arcka himself enacts upon the sample at hand: teasing out the encoded beauty.

The excellent bandcamp.com interface provides its own proprietary mode of sharing and providing free download, encapsulated in this tidy widget:

The tones are soothing, but there’s something about the rhythm, something about the way the different elements arrive, how the gentle motion and exotica-ready tune go in and out like a rocker that’s slightly off kilter. This is “Lupita,” a great new song credited to Jumping Beans and .tape. — .tape. (yes, lower case, with bookending periods) being a musician who’s handy with using external triggers to launch sound samples, and the jumping beans being exactly that: three so-called Mexican jumping beans, whose unpredictable action is used by .tape. to initiate the samples (MP3).

The jumping-bean mode seems especially appropriate for this release, since the song in question popped up this past weekend, out of the blue, on the RSS feed of the great netlabel Yo Yo Pang (visitable directly at ambulatore.com/yoyo). The reason for the surprise was that Yo Yo Pang, which specializes in single-song releases, hadn’t made a peep since October of 2008.

Though the song works well on its lonesome, there’s a video of the beans in action at labisogno.org. Screen shot below — that’s the laptop running the receptive software to the left, and the little dish with the Mexican jumping beans to the right: 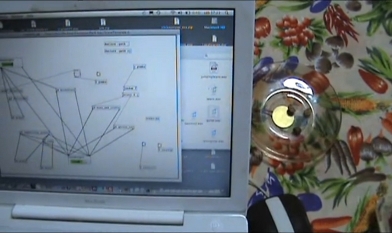