This week, the Disquiet.com MP3 Discussion Group returns to collectively given a listen to two albums released this year by the duo Mountains: Choral (cover at left — on the Thrill Jockey label) and Etching (cover below — and which Mountains self-released). Mountains is Brendon Anderegg and Koen Holtkamp, and they traffic in a rich and unique realm of drone-music, in which rural guitar atmospheres and acoustic elements mingle amid lush, beautiful harmonic fields. A previous Mountains album, Sewn, was one of the top-10 albums of the year on Disquiet.com in 2006 (disquiet.com). More on Mountains, including streams of several pieces of their music, at myspace.com/apestaartjemountains. 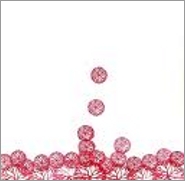 Participating in this week’s MP3 Discussion Group are: Julian Lewis: “I write much of Lend Me Your Ears, a UK/Spain-based MP3 blog that appreciates less obvious music.”Alan Lockett: “I write music reviews and commentary on ambient/drone, the more adventurous end of techno/house, post-dub, and IDM. Based in Bristol, epicentre of the Dub-zone in the Wild West of England, I can mainly be read on igloomag.com and furthernoise.org.” Joshua Maremont: “I record as Thermal and pursue my musical and other obsessions in San Francisco.”The conversation will play out in this post’s comments section. This is by no means a closed discussion, so do feel free to join in.