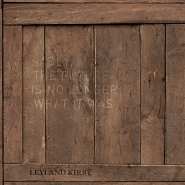 When is an album not an album? Perhaps when it consists of 20 songs — two of them topping 20 minutes each, over half over 10 minutes, none shorter than four — spread over three CDs, at which point it can feel as much like a challenge as it does an act of artistic self-expression. That’s certainly a teetering point that we’ll be debating in this week’s MP3 Discussion Group, where the object of our collective fixated listening is Leyland Kirby‘s elegiacally titled Sadly, the Future Is No Longer What It Was, released on the label History Always Favours the Winners.

A little note on discussion format: This is by no means a closed discussion, so do feel free to join in. Also, the initial posts by participants were all written before they had an opportunity to see each other’s take on the album in question.

More on the album at its label’s website, haftw.wordpress.com, and on Kirby and his numerous pseudonyms at discogs.com.

These, by the way, are the covers of the three individual albums contained in Sadly, the Future Is No Longer What It Was.