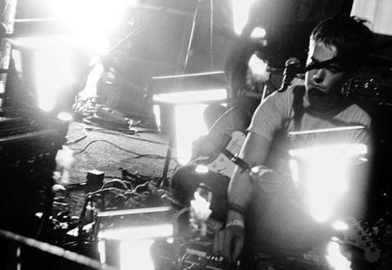 The podcast of Percussion Lab has been regularly posting live sets by prominent and up’n’coming musicians. The most recent is an hour-long performance by BenoÃ®t Pioulard, of the Kranky label, recorded at the 2009 Decibel Festival, held annually in Seattle, Washington.

The post lists the source material as “Harmonium drones, distant vocals, guitar loops and dictaphone recordings,” and the resulting music indeed starts off as a thick drone. But soon enough, the drone is not enough; melody appears, a snake of a tune, running through the drone, sunken deep inside — it’s like some lone guitar being played in the center of a stadium filled with sonic jelly (MP3).

The set is a wide-ranging one. There are even extended period of folky singing that suggest the Waterboys at their most sedate. It’s the earthy quality, the flavor, of Pioulard’s singing that makes it fit in perfectly well with the more amorphous, almost song-less droning.

Original post at percussionlab.com (from which the above photo is borrowed). More on Pioulard at pioulard.com.