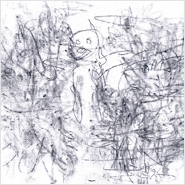 The murky and atmospheric noise-jazz of Leandro Ramirez‘s album jaja sh represents the dark side of fusion. His loosely strung instruments play rough, sour chords and single-note riffs in a manner that traces its mode back to that of Ornette Coleman, the great jazz saxophonist. Even though there’s no saxophone heard here, there’s something in the way Ramirez’s melodies seem to move backwards, as if feeling their way up a creaky staircase, that brings to mind Coleman’s more outward-bound experimentation.

At times, especially on the album’s fourth and final track, this sounds like free jazz being played with televisions turned to dead channels (MP3). It’s a crab-walk approach, in which notes seem at cross purposes: the tonalities are familiar, even song-like, but they’re heard as if broken up and presented as a puzzle, a puzzle in which the pieces are mildewed, and expected to be put together in dim light.

There’s also the way casual gestures result in unusual textures, which in turn come to serve a rhythmic role in the music — this aspect is less Coleman’s manner than that of guitarist Bern Nix, sideman on Coleman’s superb Body Meta album. It’s especially apparent on jaja sh‘s first track (MP3).

All of this is filtered through a sensibility that is occasionally languorous, as on the second track (MP3), and often deeply chaotic, if blunted and charismatically meandering, as on the third (MP3).

The Spoils of the Beat Battle

Been awhile since the last check-in at the ongoing Beat Battles series hosted by stonesthrow.com, the popular message board of its namesake record label.

The latest, number 151, like all previous Beat Battles, involves tossing up a beat-friendly sample and seeing which battler can push it further along.

As always, among the entries you’ll find both rudimentary cut’n’paste, and some inspired executions — and also as always, once you’ve listened to a handful of the mixes (at least 38 files were uploaded to the arena, at drop.io/battle151), you won’t listen to the original the same way again.

This time around, the source material is a tinny bit of rhythmic simplicity, though it has just enough different segments — old-school beats, Casio-quality congas, some vocoded chanting — to allow for numerous mixing outcomes.

The original is available as a download, but not for streaming, at mediafire.com. Among the highlights of the contest are those by bit1 (MP3), who provides a slo-mo version, all laconic hand claps, buzzy atmospherics, and a riff that suits the downtempo approach, and insDrumental (MP3), who judging by the sheer internal-combustion complexity of the outcome may have put more effort into his entry than a good number of his competitors combined.

The winner, chosen demo-cratically by votes on a separate message thread (at stonesthrow.com), was mplssoul, who worked in au courant sped-up vocals and a stuttery beat (MP3).

The direct links and streaming above may not function properly, but either way, be sure to spend some time at the drop.io/battle151 site, where the entries reside. The service continues to up its game, now allowing for Zip downloading of a given folder. Also give a read to the comments that trail each entry, evidence of the supportive community of producers that has built up around the Stones Throw Beat Battle.

The melody that makes itself heard occasionally in “Potential Ride” by Mark Rushton certainly doesn’t sound tense. The effect resembles the opening theme music of The X-Files, a wavering single-note riff whose playful childlike manner serves as a kind of musical interrogative, an aural “what if?” And that’s about as threatening as it gets.

But there is tension in “Potential Ride,” considerable tension, and it has nothing to do with television reference points and everything to do with the space between that melody and the background drone in which it is heard. Rushton himself hinted at this when he mentioned (at markrushton.com), while posting the track last December, that it’s “more melodic than you normally hear out of me.”

What he was getting at was how just the slightest bit of melody can bring music permanently into the foreground, and that permanence is at odds with the background potential of ambient music, which by most definitions should be able to function as both background and foreground listening.

Rushton deals with this by pacing the melodic segments with a certain amount of hesitance, and allowing the drone to consume much of the listening experience. The result is one in which the melody is doubly subsumed, both in the hazy drone, and in time.

More on Rushton at markrushton.com.

Images of the Week: Sketches of Dismembered Pianos

What happens when discarded pianos are rejuvenated and extended with technology? It should look something along these lines: 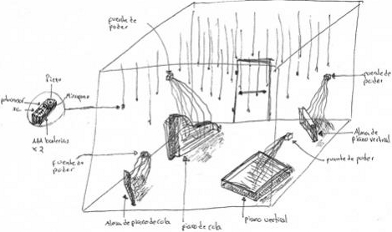 That’s a rough sketch by artist Hugo SolÃ­s of his interactive sound sculpture “Metaphors for Dead Pianos,” which opens at the Seattle gallery Jack Straw on January 29 and runs through April 2, 1010.

Photos of two previous public renditions of “Metaphors” from last year (first at the Ex-Convento del Carmen in Guadalajara, and later at Biblioteca Vasconcelos in Mexico City) appear at the website of Eric Thompson (nestofdemons.com), who assisted in their installation. Here’s one of Thompson’s photos: 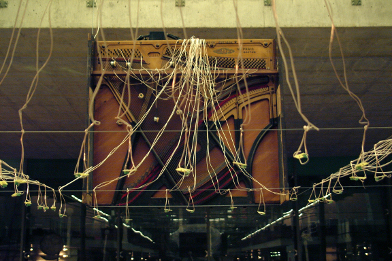 The original title of the work is “MetÃ¡foras para Pianos Muertos,” in the native Spanish of SolÃ­s, who was born in Mexico City and is pursuing his Ph.D. at DXArts in Seattle, aka the Center for Digital Arts and Experimental Media at the University of Washington Seattle.

The image of a suspended piano, its innards splayed and connected to a raw grid of electronics, brings to mind David Byrne’s recent work “Playing the Building,” in which an organ is rigged to trigger sounds from inside an architectural site. But whereas Byrne’s piece physically links an antiquated instrument to a building, in the case of SolÃ­s’s “Metaphors” the relation of building to instrument is one in which the expansive space allows for the instrument to be taken apart — essentially allowing individuals to move inside the instrument. In that sense, “Metaphors” is in the tradition of the prepared piano, in which the insides of the object are treated with string, tape, metal, and other items in order not only to alter its sound, but to bring to the surface aspects that might have come to be taken for granted, made almost invisible, to the audience.

The brief description at the Jack Straw gallery states, in part,

“The poetical goal [of ‘Metaphors’] is to revive the instruments using a contemporary sonic perspective. The pianos are extended with custom electronic circuits, custom software, microcontrollers, sensors, motors, and solenoids.”

It would be interesting to know if the addition of these motorized, electric components is part of a metaphor intended to depict the piano, and the musical and cultural legacy associated with it, as something in need of life support.