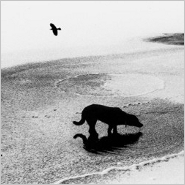 Minimal techno isn’t as minimal as it once was, or as the name might suggest — or as it thinks it is. Popularity and populist impulses can lead to creeping complexity, density, and, God forbid, flamboyance. Tracks of self-described minimal techno can come thick with flourishes, weighed down by chimes, and keyboard tones, and a grab bag of “look-at-me” (or at least “listen-to-me”) elements that fail to evidence compositional, let alone atmospheric, restraint. And then along comes a track like “Selun,” the one that opens Alessandro Crimi‘s recent EP, Changements, on the Broque netlabel (MP3). With a beat that pulses like a bald tire, stereoscopic claps that sound like they were sampled from a subdued fly, and a bass line that couldn’t wake a baby, the piece is the perfect accompaniment to a midnight drive — or a good book. And at a healthy eight minutes, it’s long enough to get lost in.

Give the full release a listen at broque.de. More on Switzerland-based Crimi at myspace.com/alessandrocrimi.