Slowing Down Among the Pygmies (MP3) 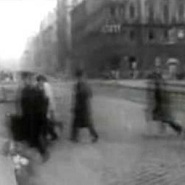 Much of the music on Alan Morse Davies‘s recent album, It Is Glorious to Make Electricity for Socialism, will be familiar to readers of this website, because the set is a collection of material he produced throughout last year, some of which was covered here — including his super slo-mo distillation of “Gloomy Sunday” (disquiet.com) and an homage to Icelandic composer JÃ³hann JÃ³hannsson (disquiet.com). At least one of the collected pieces, though, had previously evaded my attention, “Pygmy Polyphonics (Protracted).” The parenthetical gets to the core of Davies’s method. At he puts it in the album’s liner notes with far too much modesty, the piece “is a slowed down field recording of pygmies.” But there are many pre-existing sound recordings, and many speeds at which to slow them down, and the beauty of Davies’s accomplishment lies in how the plaintive indigenous voices are revealed as elegant layerings in his glacial reassessment:

Full release at archive.org. More on Davies at alanmorsedavies.wordpress.com.