Quote of the Week: The Silence Inside Basketball 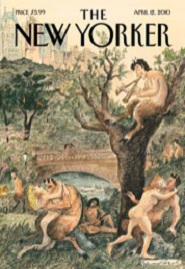 Excising a few lines from a longer poem can be as invasive an act as displaying a detail of a larger piece of visual art. Free of (though not entirely free from) its original context, the segment can take on an abstraction, a peculiarity, that is entirely unintended by its author. With that warning, and all the caution that comes with it, below appears a section of “Next Door,” a poem by Jessica Greenbaum. “Next Door” appears in the current issue of The New Yorker, dated April 12. (The full poem is viewable at newyorker.com.) Each week I read the poems in the magazine, and in recent months had begun to actively seek out references to music (to noise, to silence) that might appear in the poems. I’ve been surprised how infrequent such reference have proved to be … and then Greenbaum’s poem appeared:

… while the shooter sized up the competition or focussed his solitary mind, and then the bomb-fuse ticktickticktick while he feinted right, moved left, setting up the shot and the listener (not trying to listen) and then the blank space of the arcing quiet as he shoots. That silence is also like the space between the reader and the page, the little nation between the writer’s words and our particular way of receiving them, or the blank station we fill in between ourselves and passing strangers, or between ourselves and people we presume to know, but most achingly in the ones we try to know.

The combination of basketball onomatopoeia (“the bomb-fuse ticktickticktick“) and the description of silence is striking, in particular how Greenbaum connects the silence that follows the toss of the ball (“the arcing quiet,” as she puts it exquisitely) to the silence between reader and page — that is, between the reader and the very poem we’re reading. She cements it by having the “achingly” aspect of loneliness echo that “arcing quiet.”

Even though she’s written the poem as an adult, it contains the silence, which here signifies a distance from others, that she recalls from her youth.