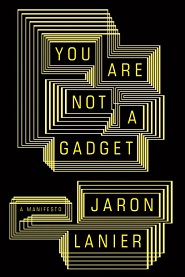 To read You Are Not a Gadget by Jaron Lanier is to be faced with the sort of conundrum that is more familiar in the political arena. You agree with someone’s big-picture view (in this case, a platform built from such ideas as that the Singularity has more in common with religion than it does with science; that crowd-sourcing can, in extremis, lead to the demeaning of individual expression; and that computer programming often locks in standards that unintentionally shape culture) but are uncomfortable with so much of how that view is expressed. When it comes to Lanier, that has to do with a certain pugilistic dismissiveness, and with some key examples he employs in the support of his thesis.

A few years ago, Lanier, best known as a pioneer of virtual reality, had an essay in an MIT Press book edited by DJ Spooky, Sound Unbound: Sampling Digital Music and Culture, which I reviewed for Nature (nature.com). In that essay (which I described in the review as a “cranky closing rant”), Lanier made the absurd assertion that the decline during the past decade of the music industry’s financial fortunes has had less to do with the impact of piracy than it has with the reality, as he asserts, that music today is “crummy.” While You Are Not a Gadget does an excellent job of wrestling with numerous subjects, such as those listed above, it also provides Lanier with the opportunity to expand on this absurdity.

Core to Lanier’s judgment is a seemingly objective conception of authorship and originality that smacks of the exact same sort of engineer’s myopia that Lanier critiques so eloquently elsewhere in his book. For Lanier it all comes down to the distinction between “first-order” and “second-order” expression:

Second-order expression is made of fragmentary reactions to first order-expression. He then goes on to single out the film Blade Runner as a prime example of “first-order expression,” as if its collage-like remixing of film noir doesn’t in a significant manner evidence its use of pre-existing cultural elements to inform its power.

Lanier’s emphasis on a sui generis first-order expression can take on, in his descriptions, a mystic property not unlike that of belief in the Singularity (the moment in the future when computers gain sentience and humans upload themselves into a great cloud of data) that he cogently derides.

As for music, Lanier firmly believes that it has failed, in the past decade, to come up with a “new” form, as if grunge, and hip-hop, and new-wave, and onward backward weren’t themselves firmly rooted in previous forms of music. Though true believers at the initial peak of those genres supported them, only as time progressed has the solidity of the categories truly come into view. When today I listen to pop radio, I am no less astounded than Lanier how much music sounds as if Duran Duran, Madonna, and Talking Heads were the only acts that mattered — and, given the brazenness with which their songs and sounds have been appropriated, as if they had never existed. But Lanier’s dismissal of contemporary music falls flat on several points:

”¢ The hive mind isn’t the same thing as mass consensus. Genres are not the sort of cultural dividers they once were, and no single act has the sort of brute cultural force the way Bruce Springsteen, or Michael Jackson, or the Beatles, or Frank Sinatra once did. There simply is no truly “popular music” the way there had been in past decades. Culture is so disperse, the past may be all we have in common; it’s telling that the pinnacle of pop music in American culture, the TV franchise American Idol, is founded on cover songs.

”¢ Technology opens a window into habits of the past. Technology may perversely magnify some human traits (witness the crowd mentality of message boards, and the double-edged sword that is online anonymity), but it also, in many cases, simply makes them more apparent. Prince borrowed sped-up vocals from Parliament-Funkadelic and Béla BartÃ³k based his compositions on folk melodies and Bob Dylan purloined lyrics and melodies from the blues and the Beach Boys loved Chuck Berry just a little too self-evidently — these are not isolated incidents, but mere drops in the example pool of how musicians who are seen as exemplars of originality in fact used pre-existing culture in pursuit of their own voice. Every bands starts out as a cover band.

”¢ Go beyond the (newly Balkanized) pop charts, and there is a vast expanse of music built from randomness, from shards of sound, from an exploration of silence (digitally enabled silence), from interactive technologies, and, yes, from pre-existing source material (not just from recorded music, aka samples, but from data turned into sound). We are not at the end of musical history, nor is it in sight. Enchanted by new tools, we may be basking for the moment in that very newness, but only to make sense of them, to adopt them into our practice. We may as a culture simply be covering the past as we give those tools a test ride.