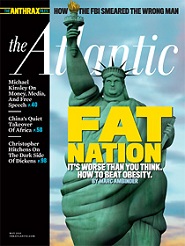 What exactly is the “music industry”? In Megan McArdle‘s article “The Freeloaders” in the current (May 2010) issue of The Atlantic (available for free at theatlantic.com), it appears to be synonymous with the record industry.

Even if the term’s breadth is expanded to include concert touring, which McArdle does loosely though far from definitively, this is like talking about “the U.S. economy” but only really speaking of the health of Wall Street. It’s an easy, concise shorthand that, inevitably, does little justice to the subject at hand.

McArdle mentions that touring is booming “despite the downturn,” thus framing it as a matter of parallel processes that emit a peculiar whiff of unrelated-ness, rather than allowing for causality: that more widely (if, yes, freely) available recorded music may have expanded the audience for live performances by a wide variety of acts. (She touches on this, noting in a brief list of alternate opinions that recorded music may serve as a “loss leader.”)

As the title of her piece suggests, McArdle sees the decline of record sales as the de facto negative, as the major story, and points her accusatory finger at “freeloaders,” which she defines along generational lines. She directly singles out the generation that followed her (and my) own, Generation X, as the prime participants in filesharing — and for the brunt of the economic blame.

To paraphrase the title of an Elvis Presley record that is no doubt available for free via rapidshare, soulseek, and numerous other services frequented by so-called freeloaders: 50-million-plus casual downloaders can’t necessarily be held individually responsible for their actions. Rather than blame this generation, why don’t we look at the culture they grew up in, and why don’t we do so objectively — not to divine the poisoned roots of supposedly miscreant behavior, but to sort out how the notion of their dissociation of “value” and “commerce” from “content” and “entertainment” came into being. (And that’s allowing for this even to be cast in generational terms — were older generations more inherently technologically adept, would their actions be any different? Are they any different?)

McArdle notes that the cost of tickets has risen along the lines of inflation. What she doesn’t note is that unlike this generation, ours was not saddled in early adulthood with the cost of cellphones and cellphone plans, computers (then only beginning to come into general use) and Internet access, video games and console systems, software subscriptions, and arguably even cable access. We had the Sony Walkman, certainly, but we didn’t swap it out with the frequency of iPod upgrades, nor were we enticed to purchase apps for them: built-in obsolescence was a generation away. This generation’s wallet has far more suitors than did ours at their age, adjusting for inflation or not. That reality, that experience, makes her depiction of them as “Generation Free” all the more mistaken.

Which isn’t to excuse theft. It’s just to point out that money not spent on recorded music is being spent elsewhere on music, and on culture — often on the hardware increasingly required to consume it. (There are days when, using my iPod Touch, I wonder if the only reason I upgraded from the “classic” iPod was to “keep up” with what’s going on with apps, rather than to actually enjoy using them.) The more money is spent on hardware (and hardware-exclusive software, such as smartphone apps and DVR video), I wonder if that doesn’t in some way reinforce the low estimation of a dollar value for free-floating virtual goods.

The Atlantic article uses numbers and market research to provide a foundation of objective distance, but then limits the scope either through rhetorical contrivance, or general shortsightedness. Just as touring’s boom occurs “despite” the decline in record sales, McArdle mentions how Radiohead fans averaged “just” six dollars for its In Rainbows album, the record the band made available in a pay-what-you-like “scheme” (her word). Would Radiohead have made “just” six dollars a pop had the record been sold solely through the traditional record-industry channels? McArdle, concerned about the devaluation of music, bases the “value” of an album not on what the artist makes in profit, but on what the audience is willing to pay. Perhaps that perception is at the root of the problem.

Vinyl LP or MP3, McArdle sees music as something sold as a fixed cultural object. Little context is given in the article for music licensing as a revenue stream. No consideration is given to sales of music gear, including instruments and software, nor to the growing realm of music-related experience in which the role between audience and performer is blurred through interactivity. Despite which absence from the article, that is all part of the music industry.

Is it inevitable in an article on the business of art, popular or otherwise, that the motivating factor must be presumed to be financial profit? Do musicians need to aspire to stadium seating in order to have fire in their hearts. McArdle seems to believe so, writing, “What happens to the supply of willing musicians when the prize is an endless slog through medium-size concerts at $25 a head?” She claims that the music industry has “always worked on a tournament model: a lot of starving artists hoping to be among the few who make it big.” Which sounds a lot like she’s OK with musicians starving, so long as a few make their millions. In the end, I ask, define “always.”

3 thoughts on “What, After All, Is the “Music Industry”?”