Anticipation for the upcoming album by Oval, titled Oh, may be even higher among electronic-music fans and observers than was that for the recent Autechre full-length. Autechre’s Overteps followed Quaristice, its previous album, by a mere two years. Oh by Oval (aka Markus Popp) ends something along the lines of a decade-long break from commercial recording, since he put out Ovalprocess (2000) and Ovalcommers (2001) in quick succession. (In 2003 Popp and vocalist Eriko Toyada collaborated under the name So on the album So.) 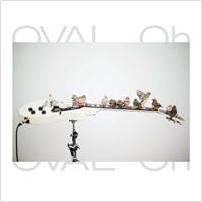 Oh is due out on June 15. In the meanwhile, above is an image of the album’s cover, which appears to feature a detail of the work “from here to ear” (2007) by French artist Céleste Boursier-Mougenot, in which birds serve as nature’s own resonators as they sit atop an electric guitar. The work serves as something of a pastoral response to Christian Marclay’s famous “Guitar Drag” (in which an amplified guitar is pulled from behind a pick-up truck).

Review copies of Oval’s Oh are now circulating, and I’m reserving judgment until I have had enough time to really take in its 15 varied tracks. As with the recent Autechre album, Oval’s Oh signals a significant shift — in both cases to something more melodic, less fractured, than listeners might expect. While Autechre on Quaristice employed recognizable synthesizer sounds (in contrast with rougher tonalities of the past), Oval’s Oh often sounds like broken segments of raw recordings of a post-rock band in rehearsal. And whereas Oversteps was, to me, a serious disappointment, Oh so far is anything but.

More details on Oh, including full track listing, at the website of its releasing label, thrilljockey.com.

My 1997 interview with Popp/Oval (which I was pleased to see referenced in the recent MIT Press book Cracked Media by Caleb Kelly) at disquiet.com.

And my brief review of So, which I listed as one of the top albums of 2003, at disquiet.com.

And speaking of Boursier-Mougenot, here is a video segment of his entrancing work “from here to ear”:

PS: An update (as of April 27). A representative at the Thrill Jockey record label provided a little more information on the album cover, and on Boursier-Mougenot’s relationship to the Oh album: “Céleste didn’t have anything to do with the music but he did provide permission to use the image as our artwork almost immediately.”