Chris Carter: No MIDI, No Keyboards

Once upon a time, entering a record store meant the start of a hunt. Not in the crate-digging sense, in which one digs, archeology-style, for the remnants of past cultures — “Why look, a totem of early remixes in the form of the INXS 12″ ‘What You Need'” — but a hunt for what fresh prey might have surfaced. New records from non-chart-toppers would arrive in bins unannounced. Thus, during this time period (think of it as having come to a close circa 1995 BCI, or Before the Common Internet), discographies were still hard to come by, and so one often found oneself face to face with an album or a single, and one would have no real sense from whence it came: Was it new? A re-release? A re-packaging?

This was especially an issue in the case of “imports,” which were tagged (and priced) accordingly, and which carried with them some special aura, having been yanked from their native land and ferried surreptitiously across one or another body of water (this tradition lives on in the vestigial form of the “Japanese bonus track”). That would be back in the day when getting music from, say, London to San Francisco involved a week of freight — not today when it’s a matter of how much you’re willing to cough up for so many Mb/s from your Internet service.

Of course, the Internet may have made hyper-detailed discographies universally available (unless China is censoring discogs.com along with Twitter), and it certainly introduced the joys of buying (not to mention sampling) music late in the evening. But with those digitized renditions of past behaviors came new behaviors, and thus one might find oneself today on the personal web page of an accomplished musician to learn he (or she) has uploaded an experiment — something neither single nor 12″ nor full-length, just a taste of what it is they’re working on between such things.

It may be one of the most exciting realms in music today, that gray zone of listening — as when Chris Carter, of the legendary industrial band Throbbing Gristle, posted “no MIDI no keyboards,” five and a half minutes of low-grade throb, at soundcloud.com/chris_carter recently:

Carter explains in the post (and at “chemistry lesson” blog) that the slo-motion techno dirge was an attempt to make music, as the title suggests, with neither of the cornerstones of much electronic music (at least his generation’s understanding of electronic music), not the universal trigger known as the keyboard, nor the tech-communication protocol called MIDI. Instead he employed various Kaoss pads (which use a pre-iPhone/iPad touch interface), and numerous lesser known devices, arranged as follows: 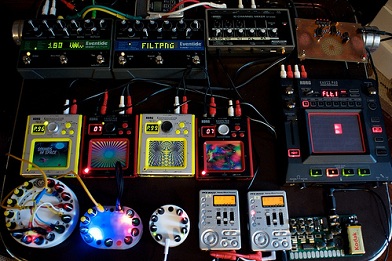 Carter isn’t just a consummate drone-smith. He’s also an eager participant in this new realm of music. Gone are the days of paying extra for a plastic-sealed Throbbing Gristle LP, uncertain of its origin or contents. Instead, Carter regularly posts new tunes at his Soundcloud.com site, and uploads photos of his activities at flickr.com, and tracks his daily thoughts at twitter.com/chriscarter, just to name a few of his online hangouts. Chris Carter: no MIDI, no keyboards, and no rules. 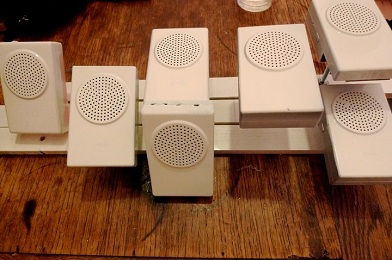 Killing Buddha æ®ºä½› is the name of a sound-art installation at Radioartemobile in Rome, Italy, co-created by Staalplaat Soundsystem and FM3 and due to open June 21. The duo FM3 have been posting images of the work-in-progress on their Facebook account (at facebook.com), including those shown in this post. 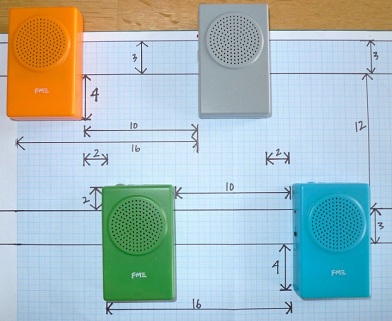 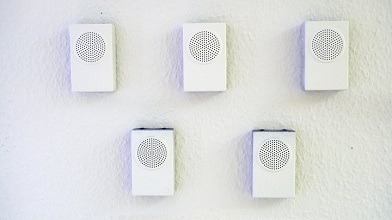 The Buddha Machine has had an incredible run, from offbeat sound-art gizmo to widely sampled source material to cottage industry, and the Rome exhibition suggests the run will continue for some time.

That such a modest device, none of the constituent parts of which suggest any sort of mainstream success (inexpensive production, low-fie sound quality, abstract audio loops), has captured so many imaginations speaks as much to our time, to the increasing public awareness of sound (apart from music) as a subject of appreciation, as it does to the implicit ingenuity of the beloved gadget’s inventors. 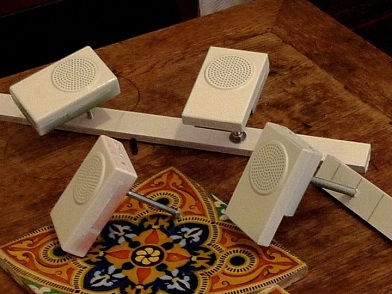 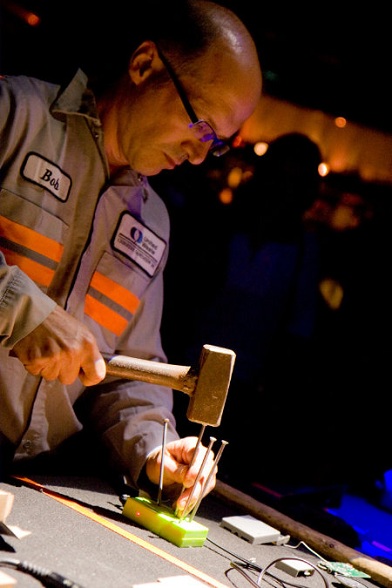 That is neither Christiaan Virant nor Zhang Jian of FM3 hammering nails into a lemon-yellow Buddha Machine, but Geert-Jan Hobijn of Staalplaat.

More at radioartemobile.it and twitter.com/buddhamachine, which seems to have succeeded the Buddha site, fm3buddhamachine.com, as the primary news source on the subject.

In related news, check out the colorful Buddha Machine gallery at flickr.com.

Quote of the Week: David Choe on Simplifying

The issue of the street-art magazine Juxtapoz that just fell off newsstands was unusual. Instead of the magazine’s regular mix of artist news, profiles, and portfolios, it was dedicated to one individual, the Los Angeles native David Choe, who graduated from Xeric grants (he won in 1999, the same year as Carrie Golus, Leela Corman, and Jason Shiga) to galleries to major commercial commissions.

The issue is packed, front to back, with his art, which mixes a variety of styles, ranging from ornate spray paint to elegant watercolors to rough sketches, and many of the individual pieces are accompanied by images of his source materials (model photos, found objects), as well as candid shots and pictures of him at work. There are also brief commentaries submitted by colleagues and by Choe himself, including this. The painting he’s talking about appears up top:

When I was younger, shyer, and more insecure, I would rock that layered look to hide everything inside. I’d wear layers over layers of clothing, sweaters over sweaters over ripped jean jacket over a trench coat and tie all together with rubberbands and bandanas. Now I just wear blank t-shirts and no pants. I used to do the same thing with my art. I was so insecure about my skill, technique, and ideas that would just layer every medium over every medium, acrylic over watercolor over spray paint over oil, and then fill every nook and cranny with microscopic rapidograph doodles. But I’m older now and more confident, my acne cleared up last year, I got some stink on my dick. I’m more secure with my tools, and the next few pages are pure and simple idea paintings I did using only one medium, either oil or watercolor. They are alive. I love acrylic and spray paint, but it’s just not the same. Painting with water and oil is almost like alchemy or magic. The painting I did on this page is called Silent Dance. I painted it using oil right after I got out of jail while I was living out of my cousin’s garage. It’s maybe one of my most favorite paintings I’ve ever done if you stare at it long enough, you can find God in it. Literally, not joking.

While Choe is talking about visual art, his lessons, his experience, in regard to the benefits of simplification will be familiar to musicians. In Les Paul’s between-song banter at the Iridium in Manhattan, the late inventor-guitarist would talk about how, with age, he’d come to play more slowly, and just how much more difficult it was to do so — not to limit himself, so much as to produce music at a slower speed of which he was proud, music he that he felt certain could make an impression on an audience presumably entranced by flash and firepower.

Among the many interesting things in the rise of ambient music as a widely practiced art is that musicians are, at a young age, producing pieces that are gossamer thin, rather than, as Choe puts it, layering on as many instruments and effects as possible to be ensure an impression. In time, of course, some of these musicians, in a roundabout manner, attempt something harder and heavier — consider fragile turntablist Kid Koala’s experiments with the Slew, or Robin Rimbaud, who after a decade of introspective electronic music branched out into post-punk pop as a member of the band Githead.

Between its scene-setting title and its tantalizing mix of overheard noise, Richard Crow‘s Imaginary Hospital Radio, at just over 40 minutes in length, serves as a kind of plot-free radio drama. It’s one in which the witness wanders the dim hallways of a municipal hospital, overhearing intimate and coldly executed conversations about numerous maladies. Much of the claustrophobic (claustrophonic?) picaresque occurs in near-silent corridors of the powerless. The sound of routine check-ups is regularly interspersed with the mechanical wheezing of the location’s massive HVAC system (MP3).

The track is the 52nd in the estimable Touch Radio series, which in the past has dealt primarily with raw, if expertly produced, field recordings, but that has, of late, emphasized the artful treatment of found sounds. This is how the project is described:

Imaginary Hospital Radio mimics and subverts conventional hospital radio and its aim to relieve its listeners/patients through the collaging and dissecting of the visceral and surgical sounds associated with illness and disease. The hospital’s unwanted sounds and noise provide an unexpected artistic source, as a kind of sonic tableau ”“ an invisible operating theatre in which the sonic/audio auscultation/surgery occurs ”˜live to ear’.

More on the recording at touchradio.org.uk.