Quote of the Week: The Multidisciplinary Nature of Sound

From the introduction to Brandon LaBelle‘s new book, due out April 1 from Continuum, Acoustic Territories: Sound Culture and Everyday Life:

Sound studies continues to emerge as an expanding discipline involving many concentrations and discourses. From musicology to anthropology, histories of media and cultural pracices, to performance and voice studies, the range is dynamic and also highly suggestive. I take this as no surprise and want to underscore such diversity as integral to the significance of auditory experience. 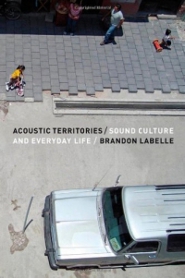 What LaBelle is onto is that the apparent hodgepodge of fields that involve sound is less a sign of the still nascent state of sound studies than it is of the inherent multidisciplinary nature of sound. We’ve seen this before, in film and comics studies, for example, which in academic institutions sometimes have their own dedicated departments, but are often part of other — often multiple other — departments. Sound’s emergence as a field of study is happening at an opportune time, when these divides between fields of study are becoming increasingly less meaningful. In the fine arts, it’s often discussed how the current generation of artists feels less required, than did previous generations, to focus on a particular medium. In the information architecture of online publishing, Venn Diagram interstices of tag clouds often prove far more meaningful than do authorial categorizations.

More on the LaBelle’s Acoustic Territories at continuumbooks.com.