To Tape or Not to Tape: In a nytimes.com review of the June in Buffalo Festival (as in Buffalo, New York), Allan Kozinn comments on an ensemble, Signal, that opts to perform Steve Reich‘s “Double Sextet” with 12 instruments, rather than as six instruments played against a prerecorded tape:

Other ensembles, like Eighth Blackbird, have used the tape version, and it would be hard to say with complete assurance that the all-live version is more supple. But there is a lot to be said for seeing 12 performers interacting.

The take is interesting, in that he doesn’t immediately side with the non-recorded rendition. While it’s fairly inevitable that an all-live-instrument version would have have more give — that is, be more “supple” — than one involving a prerecorded tape, it’s no less likely that there’s something special inherent in the prerecorded version that’s lost in the process: the tension between live and, as it were, Memorex; the eerie doubling of timbres when an instrumentalist is heard twice at once.

Return of the Living Gould: Nick Seaver at noiseforairports.com is porting his 2010 master’s thesis (“A Brief History of Re-performance”) to his blog. The full document is downloadable as a PDF at mit.edu (other promising theses include such subjects as the “metaphorical potential” of, as well as ethics in, video games; as well as “civic production” in mobile video). The most recent section he has culled is on Zenph, the studio that specializes in simulating live performances based on existing recordings. As Seaver points out, such a feat is of particular interest with Glenn Gould since he famously retreated prematurely from the stage to focus on creative life within the confines of a studio:

Although Gould was not seated at the bench, he seemed to be everywhere else: in the grooves of the record, the name of the studio, the replica of his chair, and in the few megabytes of data that ran through the cable and triggered the array of precision solenoids attached to the piano’s internal mechanism, or “action.”That “the only thing missing”seemed to be a holographic projection of Gould himself was a testament to the success of Zenph’s other projection: the motion of Gould’s hands and feet, pulled through time and space in thousands of precise measurements and reconstituted by the technological apparatus on stage.

Shoot the Player Piano: Nicely slotting alongside Seaver’s piece on Gould is another noiseforairports.com entry, this one about this video by Jürgen Hocker of Conlon Nancarrow‘s piano rolls:

Nancarrow arguably foresaw Zenph’s business model, and did his best to render it moot by removing himself from the performance equation to begin with.

Cardiac Development: At Hugo Verweij‘s everydaylistening.com, there is news of the Heart Chamber Orchestra (heartchamberorchestra.org), the heartbeats of whose members “are picked up by electrocardiogram sensors, and fed into a computer”:

The information is used to create a composition which score is sent back to the musicians to be played from the laptop screens in front of them. At the same time the heartbeats influence the visuals on the screen. 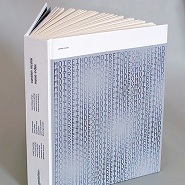 Pattern Cognition: Alva Noto alter-ego Carsten Nicolai is following up his book Grid Index with Moiré Index. Like it’s predecessor, Moiré is a thick, spartan collection of spare geometric images — truly the visual equivalent of much of Nicolai’s sonic output. The book includes a CD, but there’s no music on it: “A CD accompanies the book and contains not only the featured moirés as digital files, but also individual elements that can be used to create an almost endless amount of new overlays.” Info at raster-noton.net.

Be Quiet; Be Very, Very Quiet: Practical advice for recordists on “How to Capture Very Soft Sounds”: soundplusdesign.com.