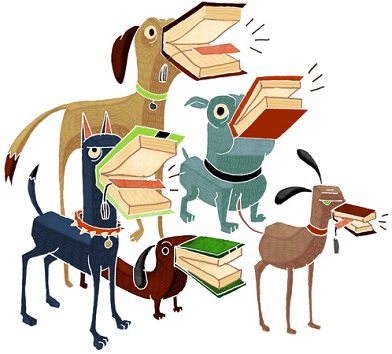 Rosecrans Baldwin, author of the forthcoming novel You Lost Me There and founder of themorningnews.org, takes notes as he reads. One of the things he catalogs is the sound of dogs barking — not in the world around him but in the world of the novels themselves. The appearance of these dogs, or at least the sound of these dogs, often serves as a kind of aside, a scene-setting, remoteness-instilling notation along the lines of mentioning inclement weather. Which is to say, it’s a cliche, a cliche he digs into in a recent slate.com essay, titled “‘Somewhere a Dog Barked.'”

Baldwin has located barking dogs in the work of authors not often associated with cliche, among them Richard Ford (from Independence Day: “From the linden tree shade, Kristy hears something in the afternoon breeze — a dog barking somewhere, my son in our car. She turns and looks toward me, puzzled”) and Tobias Wolff (from Old School: “During our worst dreams we are assured by a dog barking somewhere, a refrigerator motor kicking on, that we will soon wake to true life”), not to mention Kurt Vonnegut, Robert Penn Warren, Monica Ali, and Robert BolaÃ±o.

The regularity of these barking dogs — this “auditory motif,” as Baldwin puts it — in fiction has not endeared them to him. He writes,

“For all we know, these dogs are off-camera sound machines set to woof.”

He allows they could be a kind of author-to-author wink, but ultimately he seems to think they signify laziness: “These howls are empty and cheap-and I’ll float the opinion that publishers should collar them.” At the end of his essay, he reports a realization on the part of a friend, also a novelist, who discovered that he had unconsciously put just such a dog in his own book: “But the dog then appears a few lines later, so he does exist,” the friend wrote, by way of explanation. “That’s all I ask,” says Baldwin.

In general, the element of a heard-but-not-seen sound seems promising in fiction, but Baldwin’s data-mining is tough to argue with. Presumably his “That’s all I ask” guideline has less to do with a concern for auditory motifs in fiction in general, and more to do with leashing this particular one to the story itself.

(Illustration by Rob Donnelly for slate.com.)

3 thoughts on “Quote of the Week: Dog Bark as Auditory Motif”