If “vuvuzela” isn’t the Word of the Year, expect to hear a lot of Bronx cheers. Past winners, which are determined by the American Dialect Society, have included “tweet” (2009), “subprime” (2007), and “y2k” (1999). It’s certainly difficult to recall a single sound as widely discussed as the “vuvuzela.” The word refers to the long, tapered, plastic horn that resembles an over-sized golf tee, and whose continual playing by thousands upon thousands of fans has been the white-noise backing track to this year’s World Cup. 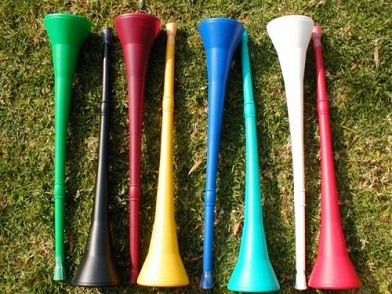 Just as one gauge of the vuvuzela’s place in the public consciousness, take a look at the development of its wikipedia.org page: there have been twice as many updates to the entry in 2010 as there were between 2006, when the subject first arose (during the previous World Cup), and 2009. (Will the history records of Wikipedia entries replace article counts in LexisNexis as the new measure of a subject’s ubiquity?) In the New York Times (nytimes.com), Rob Walker (friend of Disquiet.com) noted the depiction by Jemele Hill, at espn.com, of the horn as “a major subplot of the World Cup,” and the advice, via createdigitalmusic.com, on how to filter out the sound. A professor at George Mason University named John Nauright suggested that the horn may have roots in “the traditional kudu horn used to call villagers to gatherings” (according to smithsonianmag.com). Composer/sound-artist Andreas Bick took issue with interpretations of the horn’s significance that emphasize a rowdy underclass: “Can anyone from the townships of South Africa afford a ticket for a … match?”

And as of Saturday, there were 32,072 members of a Facebook group named “Ban football from vuvuzela concerts.” While there’s humor in that association (the widely despised noise as music), some have taken it seriously — at least seriously to mix the sound into something composed, in an abstract-electronic way. Alec Vance, back on June 15, posted at aleatoric.backporchrevolution.com just such a recording (MP3), and while doing so, he noted a particularly interesting aspect of the word “drone”: “I am not sure, but I am pretty sure that it’s not a coincidence that the word ‘drone’ is used both for male worker bees and the droning sound that bees make.”

Vance’s track takes about 15 minutes of the U.S. England game and echoes it into a dirgey wonder, a spinning noise without center. The track, notably, doesn’t fetishize the horn. Quite the contrary, it makes clear that the horn is part of a broader array of sonic artifacts at a Word Cup event: there’s the play-by-play of announcers, the beeping of whistles, and foremost the roar of the crowd, which at certain point rises just as the sound of the collective vuvuzelas dies down: you can’t blow your horn and yell at the same time.