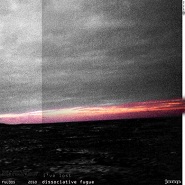 The sounds are just select enough, just refined enough, just stretched-to-near-breaking enough to seep into the background. The music presents a dreamstate of melodic progression, each note held until it seems to make a move from one ear to the next, passing like scenes outside the window as you make your way across the country by car. These are “Absence” and “The Big Empty,” the two tracks that comprise Dissociative Fugue, the new free release by I’ve Lost (aka Bobby Jones).

The subtle fugue-like activity that the album’s title uses to announce Jones’ approach takes place as a casual layering of elements. Just as one ribbon of sound comes to a close, another has just about come into the sonic foreground. The pieces work particularly well because the lead lines, such as they are, never seem to stand apart from the background; there’s a heavy “depth of sonic field” at work here, and that resonance, that sense of density and presence, may be the EP’s greatest accomplishment. Yes, it arguably counts as an EP, even though it only has two tracks, because combined they’re almost 30 minutes in length.

Rest assured this isn’t pure sonic prettiness for its own sake. At times the tones have an almost harsh, razor edge to them, sharp and prickly — nothing too aggressive, mind you. But for once, it’s less a matter of melody than of tone that keeps your mind focused on what might, in less able hands, have been relegated entirely to the background.