The Rhythm of Labor (MP3) 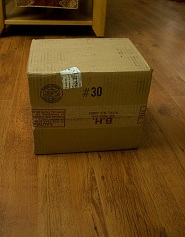 Vanessa Rossetto has made a recording that serves as a sound-only answer to, or at least a useful and highly listenable correlate to, that video that circulated recently illustrating the sounds that a package heard as it moved through space and time toward its destination. (More on the video below.) In Rossetto’s montage recording, available as a free download from compostandheight.com, space is a constant, unless you count the small motions that Rossetto herself makes. The variable is time, and the point less a matter of variety than of patterns. See, what you’re hearing is Rossetto packing books, day after day. She explains in a post at Compost and Height:

I sell books for a “job,” so I pack books every day. This summer I began recording myself working over a period of several weeks. At various times throughout, mostly toward the beginning of the recording period, I wore headphones while working so I was made even more aware of the sounds I was making in the course of my daily activities. Immediately it began to affect the gestures used and the speed with which I was going about my tasks. I began to think more and more about the specific sounds I was making while still being able to maintain a productive work flow. In turn, I began to think about all the sounds I was making whether I was working or not, whether I was recording them or not, and about the rhythm of labor in general. This piece was edited down from many hours of recordings in Texas in August and September 2010. While it is edited, there are no additions; no parts that were not recorded during the process of working. Some days it rained and some it did not.

The result is a mix of scratching and stretching, turning and pausing, with a purposefulness that no one will necessarily appreciate as much as Rossetto. But that’s the essence of sound-feedback on a day-to-day basis (that’s feedback not of the sound-contorting kind, but of the self-reinforcing kind). Repeated actions gain a kind of musical currency, a score to the choreography of everyday life, when infused with just a notion of self-consciousness. To listen to Rossetto’s recording several times in a row is to get ever closer to her own perception of the patterns in the motions, to her ability to find beauty in the repetition, and to make art from, as she puts it eloquently, the “rhythm of labor.”

One caveat: The file, stored as Zip archive, is very large relative to its length, over 110MBs, for 14-plus minutes of sound. Here’s the link: Zip. Visit the original webpage at compostandheight.blogspot.com. More info on Rossetto at myspace.com/vanessarossetto.

As for that video, here it is: “Dictaphone Parcel” by Lauri Warsta. Its sound is, like Rossetto’s, an edit, a reduction of a much longer experience. The video is a fiction, intended to illustrate what’s heard.

Rossetto’s audio can act as a kind of prequel to the Warsta video, the moment when the package is formed, before it’s shipped out on its adventure.

Warsta video found via Tim Prebble’s great musicofsound.co.nz (Prebble points out that despite the title, this is a Nagra, not a dictaphone, pictured). More on Warsta at cargocollective.com/lauriwarsta.