The Train as Sample as Song as Memento (MP3) 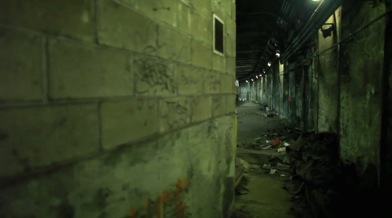 Love of Tunnel: A still from the film that serves as the sonic source material for this “pseudo song”

Esbie has taken sounds from the widely praised subterranean documentary Undercity by Andrew Wonder and turned them into what she terms a “pseudo song.” The end result, which she titled “Undertracks” (get it?), has the elements of a song: beat, mood, and vocals, though the vocals aren’t sung, or rapped, but instead are comprised of select statements by Steve Duncan, the urban explorer whom Wonder tracks in his film.

Trains are a near constant in music, pop and otherwise: as sonic influence in the pacing of the blues, as metaphor in works ranging from Elvis Presley to Steve Reich, and, of course, as sample. Esbie’s response to Wonder’s film suggests itself as kind of souvenir. You can only watch the documentary so many times, and in so many settings, but should you have a hankering for it, this song serves as a compact and evocative, and respectful, memento.

Speaking of being respectful, it also serves as a meta enactment of copyleft creavity. Esbie reminds us in the brief liner note to her track that Wonder owns the copyright to the work she has sampled — but, of course, his documentary was a literal act of creative trespass.

Track originally posted by Esbie (aka Sarah Brown) at soundcloud.com/esbie. More on the Wonder-Duncan video at vimeo.com.

NB: I usually don’t use the “more” tag to break a post into two parts, only the first of which appears on the home page, but the Bandcamp embedded player is breaking in several browsers on the iPad. On Mac and PCs, it looks fine, but in iOS, something is up — it appears in the upper-left corner of the page. Needless to say, if anyone reading this has insight into such things then I am, as always, all ears.

The drones of Cinchel‘s recent five-track album, friday”‹.”‹deconstrucion, harbor illusions. At the end of a listen to the record, and multiple listens are suggested, the result is a series of memories whose subject, brief riffs that stood out, prove difficult if not impossible to locate during a subsequent listen. On the surface, the tracks are steady-as-she-goes minimalism, burbling feats of low-key momentum, but close attention, even if it fails repeatedly to align with memory, reveals the drones as, in fact, the combined effort of numerous tiny percussive elements: treble scintillate, throaty bass-region chords, textured cloud-like gaseous effects, urgent yet muted timpani. They’re each like a low resolution Fourier series approximation of a curve, turning a sinuous shape into a stepwise gradient.

END_OF_DOCUMENT_TOKEN_TO_BE_REPLACED 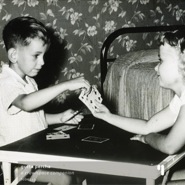 For the first seven minutes and fifty seconds of the track “Unconscious Listening III” by Gutta Percha, it’s all murky noise, the gentle creepiness of industrial industrial music. But a second later, at 7:51, everything changes. A true oldie pops up, like someone flipped a switch on the radio. It’s ballroom nostalgia, dancing cheek to cheek, but the signal is marred, either the band caught in a time slip or the vinyl record left out in the rain. The melody is indelible, even if it is forced to stop and restart repeatedly. Percha manages to have it both ways, to treat the listener to a great song, and to mark it up, to deface it (MP3). Each act has it’s unique impact: the antique pop song a surprising thing to surface, not only on an album largely populated by noise music, but midway through song; the marred rendition a reminder of the inevitability of decline.

Track originally posted as part of the album A Crawlspace Companion at the netlabel Test Tube, at monocromatica.com/net label. More on Gutta Percha at myspace.com/gutta-percha.

Scanner, a Consenting Voice, and the Notion of Collaboration (MP3)

Her voice is all vowels, the haze a matter of affect not effect — that is, not post-production effects, aside from a certain amount of what appears to be echoing, stretching her syllables without sacrificing their analog-ness, their flesh-and-bloodness.

Well, not all the haze. The voice belongs to Sally Doherty, the British singer, but for all the smoky allure she brings to “Afr.Gold,” as the track is titled at soundcloud.com/scanner, there is, in the background, and slowly seeping into the foreground, no small amount of digital exotica. That Soundcloud account belongs to the musician Scanner, and the production is his work, nanotech castanets and sonar snare drums, a call-to-secular-prayer opening bell, and throughout enough counterpoint to produce sonic moire patterns.

Scanner reports it’s part of a “full length collaborative album,” with a likely release late in 2011: “As yet no release date or label confirmation.” The use of the word “collaborative” is especially enticing. It’s a word we don’t hear enough of. We know, just to use two prominent examples, Timbaland produced much of Madonna’s Hard Candy, and that Kanye West produced much of the rapper Common in general, but those resulting albums are billed as belonging to the vocalists, which is maybe a useful illusion in the marketplace, but isn’t an accurate representation of the effort that goes into a substantial segment of popular music. As for Scanner’s involvement, since he cemented his reputation early on in his career with work combining voices unwittingly snatched from the ether along with his own instrumental compositions, it’s especially interesting to hear a voice in this very different context.

Track originally posted at soundcloud.com/scanner. Apparently it results from music the two performed at the Electron Festival in Geneva back in 2009. More on Doherty at sallydoherty.com, and on Scanner (aka Robin Rimbaud) at scannerdot.com. Scanner announced the track about 10 hours ago at twitter.com/robinrimbaud. 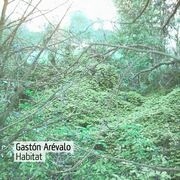 Static means different things to different people. The surface noise of vinyl. A programming error. A cable disconnect. Interference from a cellphone, a crossed signal. To some musicians, all of the interpretations, all of the guesses, are crossed signals — and to these musicians the static is yet another thing: a compositional element, one that itself signals a consciousness of the intrinsic failure inherent in technology. It can ring of nostalgia (a sonic palimpsest, the Ghost of Data Past), and it can suggest what’s yet to come (message seeping in from the future). In the case of GastÃ³n Arévalo, the glitch is matched, in a track titled “Agreste,” with a lulling sensibility, a marshy, singsongy slow wave that neither suffocates nor is irritated by the glitch’s spiny presence. That balance is the track’s major accomplishment, and the source of its pleasure:

This entry was supposed to go up last night, but I’ve been experimenting with using an iPad as a laptop replacement, and, well, let’s just say I still have a lot to learn (or perhaps the iPad does).