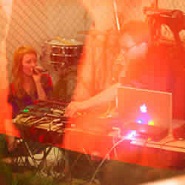 It’s not a battle, per se. The two forces at work on the album Hex tend to feel like they’re seeking balance, even if it’s more often the case that one or the other takes clear prominence. These forces are the voice of Prophecy Sun and the electronic processing of Kristen Roos. Together the duo record as Spell, which isn’t an inappropriate name for an act that offers a fair amount of enchantment. Hex‘s first and third tracks, in particular, serve up a mysterious, haunting effect. And those, perhaps not surprisingly, are the ones where the vocals don’t so much take a back seat to the equipment as give themselves over to it, in “Forest” allowing for vowels to emerge slowly from a harsh thicket of white noise (MP3), and in “Fading Away” achieving a patina of madrigal-like antiquity (MP3).

Both forces can be heard searching for a sense of solidarity, finding their most productive common ground when synthesis and voice merge into an attenuated aura. It isn’t just that the voice can overpower the vocals. There are moments, such as at the tail end of “Fading Away,” when it seems like someone turned on a video game, that it becomes clear the electronics are just as capable of imposing themselves on the process. The other two tracks on the recording, “Just a Matter of Time” and “Break the Speed of Light,” are ones where Prophecy Sun’s vocals don’t just take center stage, but the work of Roos coalesces into something more song-like.

What’s especially promising for Spell — this is their first collection of songs — is that the album was recorded live. The liner note explains: “All of the tracks were recorded in one take. There is no post-production, aside from equalization and mastering.” Additional time working together, along with some studio-based fine-tuning, could yield something remarkable.

Album originally posted for free download at notype.com. More on Roos at kristenroos.com and Prophecy Sun at prophecysun.tumblr.com.

2 thoughts on “A Marriage of Voice and Processing (MP3s)”