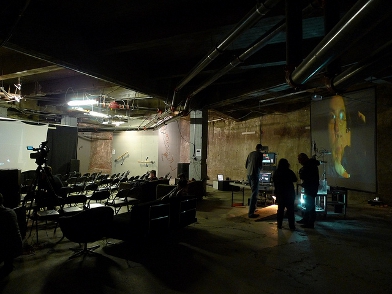 Concrete Evidence: GAFFTA’s space below the Warfield on Market Street in San Francisco

First, many thanks to Cullen Miller and everyone at GAFFTA (gaffta.org), here in San Francisco, for hosting this past Wednesday night’s sonic-arts discussion session. Billed as “Eyebeam / GAFFTA Sound Research Meetup,” it was a collaboration with the Manhattan-based organization Eyebeam (eyebeam.org) to provide people involved in sound an opportunity to discuss their work.

In addition to myself, the presenters were Roddy Schrock, a sound artist and musician who also works at Eyebeam, and Shane Myrbeck, an experimental musician whose day job is as an acoustic consultant at the San Francisco branch of Arup, more on which in a moment. The moderator was Luc Meier of swissnexsanfrancisco.org. Because the world is small, Schrock has in fact contributed to two Disquiet.com remix projects (the very first, Our Lives in the Bush of Disquiet, and one of the most recent, Anander Mol, Anander Veig), and Arup developed the winning plan for a projected Eyebeam museum (long before Arup hired Myrbeck or Eyebeam hired Schrock).

The event was held at GAFFTA, which has two floors at the base of the building that houses the Warfield theater on Market Street. We three each gave a 15-minute presentation, and then Meier moderated an extended discussion, which included excellent questions and commentary from a clearly engaged audience. (“Audience” is arguably an imprecise term, because the level of knowledge in the seats facing the panel clearly equalled, and in some cases perhaps exceeded, that of the panel — an optimal situation very much to GAFFTA’s credit.)

Schrock talked about Eyebeam’s creative mission (providing disparate hybrids of creative individuals with the funding and resources to pursue their artistic goals) and he focused on an exciting project: Eyebeam is looking into producing a book that would serve as a compendium of “best practices” guidelines for the creation and installation of sound art.

Myrbeck gave an overview of Arup’s endeavors, and of some of his own artwork. The company is a global, 10,000-person firm combining engineering, design, and planning, and it has a strong acoustic consultancy across the many cities where it maintains offices. Myrbeck oversees its San Francisco SoundLab (“an immersive, full-sphere ambisonic sound studio used for composition and acoustic simulation”). Among Myrbeck’s own recent artwork discussed was “Sent Forth,” a collaboration at Fort Mason in San Francisco with sculptor Jefferson Mack (see arup.com/news).

I spoke on what I termed “Sound as Commentary.” I looked at the variety of remix projects that have originated at Disquiet.com and discussed the common thread: how both the politically motivated ones (“politically” broadly defined) and the musically motivated ones serve as “non-verbal” participants in an ongoing discussion.

If you were in the audience at GAFFTA, here are links to the specific Disquiet.com projects I mentioned:

I also spoke about several forthcoming remix projects I am shepherding, including one that will be a fitting commemoration of the 15th Disquiet.com anniversary, which occurs later this year. I mentioned that the open-source projects had lead to some commercial endeavors, like the Hanukkah compilation for Tabletmag.com (Anander Mol, Anander Veig) and a current effort with a singer-songwriter. And I described a new Disquiet.com effort to put together a compilation not of fixed audio recordings but of small “webapps” programmed by various contributors working in Flash, HTML5, and other related programming platforms.

Here now are quick notes about some of the subjects that arose during the conversation — as a result both of moderator Meier’s incisive questions, and of the audience’s questions and statements:

Â¶ It felt off, I realized shortly before I began, for me to talk about “Sound as Commentary,” since the concept of using sound as commentary is exactly that: an effort to use sound as a constituent part of the ongoing conversation that is life on the Internet. To talk about it was to use exactly the kind of communication I was attempting to avoid. I described how Despite the Downturn and Lowlands: A Sigh Collective were, in particular, attempts to respond in sound because in both those situations to have responded with written words would almost certainly have been to raise the temperature in the discussion rather than serve to cool it off. If you accept that, to borrow a recently popularized phrase, “everything is a remix,” then I simply am asking that people consider the closely related idea that “every album is an answer album.”

Â¶ A question about “ambisonics,” an advanced form of immersive three-dimensional sound reproduction that dates from the 1970s, seemed to focus on the opportunity to create “artificial” sound environments. I just wanted to make sure that psychoacoustics isn’t left behind: that just because a specific sound can be positioned at coordinates XYZ, we don’t lose track of the fact that different people will experience that sound differently. Precision doesn’t equate with causality.

Â¶ Myrbeck mentioned several subjects I’d like to dig into further, among them (1) an architecture for the blind and (2) the role of sound in healthcare.

Â¶ Another audience member inquired (in light of Schrock’s description of a “best practices” sourcebook for sound-art installations) about systems to formalize the presentation of site-based sound art (in contrast with other forms of sound art, such as fixed recordings or software projects), to allow it to be documented and therefore to be reproduced in the future. The word “standards” was employed. I raised the issue that even at this late date stereo, an ancient protocol if there were one, is far from perfect in its ability to match experience from one playback system to the next. Thus, we shouldn’t be too hopeful in regard to capturing the wide and disparate array of sensory experiences that constitute contemporary sound installations. I added, though, that there are existing standards that perhaps artists could use more often, like the sound systems in movie theaters. And I mentioned a project that Susan Philipsz, the artist who won the Turner Prize last year (which lead to the Disquiet compilation Lowlands: A Sigh Collective), had done previously in a British Tesco market, and joked that someone could reproduce it here in Fresh & Easy, which is a Tesco subsidiary. Also on the topic of artists employing existing “standards”: I hadn’t thought of this at the time but the stream of related matters reminded me later of what Philip Glass has said about having been in opera halls prior to ever composing an opera, and being inspired to bring an apparent dinosaur back to life.

Â¶ Someone in the audience — the lights were low, so I’m not sure who — told a sad-funny story about, in light of Eyebeam’s “best practices” project, an opening for a sound art installation for which the gallery, or museum perhaps, had hired a live band, totally missing the point.

Â¶ Myrbeck made a great comment about how the relation between technology consultant and artist is not unlike the one between producer and recording artist.

Â¶ Another time when the subject of documenting sound art came up, I suggested that the new skills that arise in the process of learning to document a work were even more interesting when one considered how those skills might be employed in the production of new art. Art will always be at least one step ahead of any documentary techniques or standards. That’s one of the points of art.

Â¶ One person asked about a mobile version of the Recombinant Media Lab (a promiment technological and curatorial force for adventurous audio-visual work in San Francisco) and I said I felt it fit right in with the rise of the gourmet taco truck, which has trained urbanites for such a thing. (Recombinant is run by Naut Humon, who was in the GAFFTA audience.)

Â¶ A gentleman in the audience whose name I didn’t quite get, but who works at Arup with Myrbeck, told a great story after the formal session had ended, when people were just having a drink and talking further. He described having worked on refining the sound in a local theater, and how when the new system had its debut performance, the proprietor of the theater was upset. He asked where the “fun” had gone. Apparently they’d done such a good job of cleaning up the sound that the sense of chaos — of projected audio bouncing off walls and mixing with the sound of the audience — was gone. I was reminded of my initial experience with HD television. Everything was so clear it looked like a soap opera. A wise friend advised me that my eyes and sensibility would adjust, and so they did. That turns out to have been the case as well with the theater owner.

Â¶ The same person also had, in my estimation, the best single sentence of the evening when he said something along the lines of how the ancients keep stealing our inventions — by which he meant that for each new thing that is invented, a distant precedent can be located. Riding the coattails of his comment, I mentioned that for all the high technology involved in modern sound art, a lot could be learned from Fluxus happenings (which in many cases are about as technologically simple as you could get), not just about how to document a work of living art, but also how to free oneself from concerns about documenting the work. Not quite ancient, no, but certainly distant enough to provide useful perspective on the present.

Â¶ One final comment. The subject of noise pollution, from an aesthetic standpoint and a public-policy one, came up several times. I stated my ongoing sense that noise pollution is not as big an issue as many people make of it, that aside from isolated cases (like the wind farm one that has gained appropriate news coverage) for the most part urban life in particular is more quiet than it has been in the past, not less quiet. I said I think that there other related issues — emotional issues, social issues, and so on — that really should be the focus of public concern. I mentioned in passing that San Francisco was the first city in which the newspaper rated restaurants in part by their noise level. Someone from Arup pointed out that in their research, a high percentage of the top-100 restaurants were also on the loudest-restaurant list, providing anecdotal evidence that context can play a big role in one’s interpretation of loud sound as what is colloquially referred to as “noise.”

(Photo of GAFFTA’s interior space, from a previous event there, via flickr.com and Creative Commons.)