Note: There’s updated information in the comments section to this post.

One caveat for potential consumers, and for software developers: The new flagship Kindle device, named Fire, has no microphone.

The Fire is, of course, more than an ebook reader. While the three other newly announced Kindles (Kindle, Kindle Touch, Kindle Touch 3G) build on the line’s next-generation e-ink technology, the Fire is a tablet computer with a multi-touch color screen. The Kindle Fire is powered by a modified branch of Google’s Android operating system. Other non-Apple tablets and ebook readers are built on Android, and several have been targets of the affections and aspirations of hackers. The Nook, a product of Barnes & Noble, has likely been the most popular ereader for after-market tinkerers. Reports that Amazon will not aggressively derail those who seek to root the new Kindles (i.e., take control of the operating system; see liliputing.com) suggest that the Fire may soon rival the Nook in that regard.

The absence of a microphone, however, has unfortunate potential ramifications, especially if the Fire becomes a top-ranking Android device. For one thing, the popularity of microphone-enabled software will likely suffer — ranging from interactive sound applications like RJDJ (which takes sound in realtime from the microphone and makes new, musical sound out of it) to utilities like Shazam (which identifies songs based on them being “heard” via the microphone). Voice activation overall may be de-prioritized, should Fire gain significant market penetration. Companies may be less likely to innovate with such microphone-sensitive options as the Three Little Pigs children’s book app that makes good on the promise of blowing the house down, or the way the Clif Bar SOS iPhone app fogs up when you breathe into the microphone. Soundcloud.com’s Android app has a record function — will it need to devise an alternate version for deaf devices like the Fire? (Note: not all of these apps mentioned above are available for the Android operating system. They are simply mentioned as illustrations of the range of microphone-sensitive developement.)

The absence of the microphone emphasizes the Fire’s Kindle heritage: it is depicted as a device for consumption, not production. This is why the initial promotional materials for the Fire refer to how you, the Fire user, can “Read Your Documents” (rather than edit or create documents). The key concern is that consumption and production are not mutually exclusive; they are, in fact, two distant ends of a broad and gradated continuum. The apps mentioned above are in several cases examples where microphone use is part of the consumption.

In addition, the absence of the microphone nixes one of the staple utilities of mobile devices: the ability to take voice notes, which is arguably a better user experience when reading an ebook (or web page) than is momentarily switching one’s position in order to type notes.

The microphone is not the only immediately evident technology lacking in the Fire. Also missing are 3G support, and a camera. These absences have been explained collectively as means by which Amazon reached the Fire sale price of $199, which has been widely viewed as competitive (in response to the Amazon release announcement, Barnes & Noble for one day dropped the price of its Nook Color to $150 from $250; via mobilewhack.com). The absences also make for a certain amount of planned obsolescence, providing a simple path for Amazon to the Kindle Fire 2.0, which could add one or more of the missing features, much as cameras were added when the iPad 2 was introduced.

Certainly Android’s preeminence as a mobile-phone technology means that the operating system is, for the foreseeable future, linked to devices with microphones, but the absence of a microphone on the Kindle Fire is an unfortunate development.

More on the Kindle Fire at amazon.com.

And for reference, here are my thoughts on the iPad, a few days after its January 2010 announcement: “Avoiding iPad Bloat.”

The music in recent years from Alan Morse Davies often has had the appeal of life, as well as thought, experienced in slowest of slow motion. This is because his pieces have taken existing audio documents — of Western popular music, of Western classical music, and of the chanting from cultures less far along the Western sense of the development continuum — and extended their playing time by stretching them like so much sonic taffy, and thus revealing structures, textures, and meditative spaces inside the originals.

A new Davies album, titled Svalbard, and its subsequent single, the three-song Spitsbergen, employ pre-existing recordings as well, 78s by his description, but those always surprisingly malleable physical documents are merely one element among several, heard alongside the Welsh pibgyrn (bagpipe), the Italian zampogna (bagpipe) and ciamarella (shawm), and the hardanger fiddle, all of which he has then processed extensively. The results range, in his apt words, “from the relatively static to the dramatic.” All of them stake a claim on the landscape of the arctic Norwegian archipelago, Svalbard, which is their source of inspiration. We often speak of things being frozen in time, and that metaphor is particularly apt in sound that takes bitter cold environs as their subject matter. The tracks, for all their distinctions from one another, are inherently lovely, at times with a kind of extravagance that seems at odds with their placidity. Here are two, one from each of the two collections: “Kvitøya” (MP3), off Svalbard, and “Edgeøya” (MP3), off Spitsbergen.

How things just shy of frozen — frozen as in stasis, and frozen as in arctic — can feel so warm is but one of the mysteries of Davies’ approach.

The two sets are available for free download and streaming via archive.org: Spitsbergen (cover above right), Svalbard (cover above left). More on Davies at at-sea.com and alanmorsedavies.wordpress.com. (Photo up top by Per Harald Olsen, courtesy of wikipedia.org.) 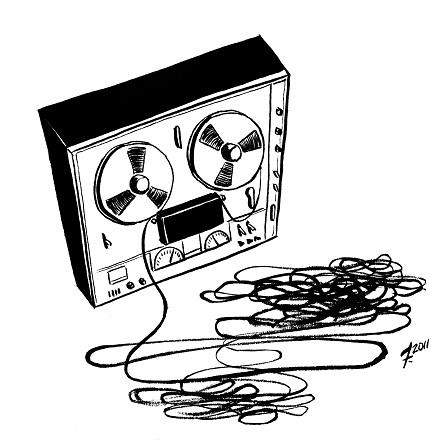 The 18th entry features this drawing by Scott Faulkner. A lifelong resident of Washington State, Faulkner graduated from the Evergreen State College in Olympia, where he contributed his first published comics to the student newspaper. There he also discovered the work of some of his cartooning heroes, Matt Groening, Lynda Barry, and Charles Burns, and moved to Seattle to join the vibrant ’90s alternative comics scene. Today, he works with the cartoonist collective The Bureau of Drawers, and more of his work can be seen at his website, vinylsaurus.com.

Kid Koala is one of the mainstays of the Ninja Tune label, his expressly nostalgic and maudlin approach to turntablism fitting comfortably between texture-oriented art music and mood-setting party music. His latest release, Space Cadet, is a follow-up to an earlier such venture, Nufonia Must Fall: it’s a graphic novel with a score. He recently discussed the overlap between his comics and turntablism — between the scratchboard on which he made the drawings, and the scratching that is the foundation of his music — as part of a wide-ranging, and highly recommended, interview on the record label’s podcast. It’s downloadable as an M4A file — essentially an MP3 with embedded images, and a slightly more finicky nature in regard to playback.

Among the influences on his work discussed during the podcast interview is Carter Burwell, best known for his scores for Coen Brothers movies. Koala talks about the difference between scoring a movie and scoring a book, noting that while the music is intended to be listened to while one reads the graphic novel, he’s not particularly dictatorial about the speed at which the book is read, or how specific instances in the score are intended to align with instants in the narrative.

He’s touring in support of the album. The evenings are something he’s described as a “seated headphone concert,” in which the audience settles into “space pods” and listens to the music on devices that allow them to adjust the volume. Interestingly, Amon Tobin, arguably the other main artist on the Ninja tune roster, is also doing a multimedia tour right now, though Tobin’s audio-visual effort, titled Isam, is far more technologically demanding than Koala’s (it’s described at amontobin.com as a “25′ x 14′ x 8′ multi-dimensional/ shape shifting 3-D art installation … enveloping him and the audience”).

Video originally posted at youtube.com. More on the release at kidkoala.com and ninjatune.net.

JÃ³hann FriÃ°geir JÃ³hannsson, who hails from ÃsafjörÃ°ur, Iceland, and records as 7oi, has in the track “Yup” crafted the perfect little morning-music instrumental. One could do worse than to set one’s alarm clock to “Yup,” and let its slow accrual of chime-like tones set the pace of the day. The initial pulses have the appeal of a metronome made of soft cotton, and in time it gains layers, each slightly apart from each other, lending it a kind of minimalism-lite appeal. JÃ³hannsson also posted the above video (best viewed in HD), which tracks the slow expansion of the composition.

Audio originally posted for free download at soundcloud.com/7oi. Video at vimeo.com. More on JÃ³hannsson/7oi at sevenoi.com. Another track by him, “Wsps,” was featured here back in April of this year.