Everything Goes Better with Automaton (MP3) 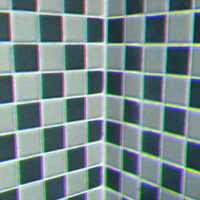 The Automaton effects unit from audiodamage.com is a unique piece of software. It uses rules from Conway’s Game of Life to trigger variations on whatever audio is sent its way. I’ve used it a lot at home to lend unexpected variation to the loops inherent in instrumental hip-hop. Brian Biggs, who records as Dance Robot Dance, plugged in his guitar. Well, not his guitar, but a guitar loop. The result is doubly refreshing — first, because it’s great to hear people still using the tool, and second, because Biggs had recently posted on his blog that he had been seduced away from his banks of modular synthesizers by a G+L electric guitar. Instead, it turns out that the guitar isn’t a distraction; it’s simply yet another item in his electronic tool shed. The piece by Biggs opens like some old-time Johnny Cash song, and quickly slips into blippy good fun. The guitar, already played with a certain amount of bounce, now ricochets with just enough chaos to make it come alive. It gains a kind of rhythmic sentience. In this case, Biggs’ robots don’t dance; they do a two-step.

It’s clearly more of an experiment than a completed piece of music, but that’s sort of the point. Biggs regularly posts things he’s working on, and to listen to this is to get your ears prepared for what he’ll do next. Here, by the way, is a screenshot of Automaton, showing the classic pixel Petri dish formations of Conway’s Game: 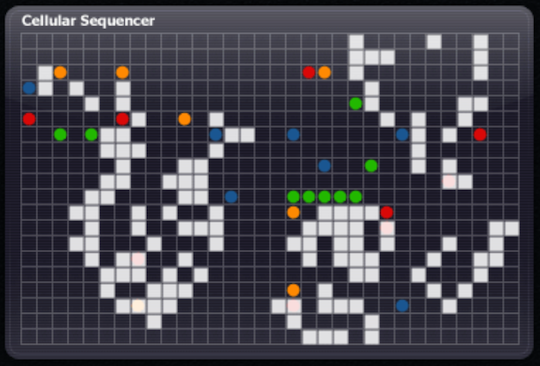 The track, titled “Buffshuffmaton,” was originally posted for streaming and download at soundcloud.com/dance-robot-dance. More on Biggs at dancerobotdance.com.

The Chat Room at the End of the Universe (MP3) 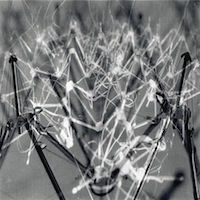 Anthoney J Hart is a London-based musician who goes by Imaginary Forces. His “CT Room” is a collection of sounds culled from unwitting microphones. There are no divulged secrets, no evidence of ill doings. To the extent that voices are heard, they sound more like Electronic Voice Phenomena than like actual conversation. According to the description that accompanies the piece, the recordings come from forms of communication (video chat rooms, instant messenger services) in which sound was conveyed but text was the primary form of transmission. And thus the verbal component — along with, even more compellingly, the extended near silences — is a mere byproduct of the process. The result is a series of textured static and garbled speech, of curt bits of grey fuzz and thick ropes of drone. Speech is an underutilized component of electronically mediated music and sound art, and here it is successfully sourced for its sonic rather than its literal assets. 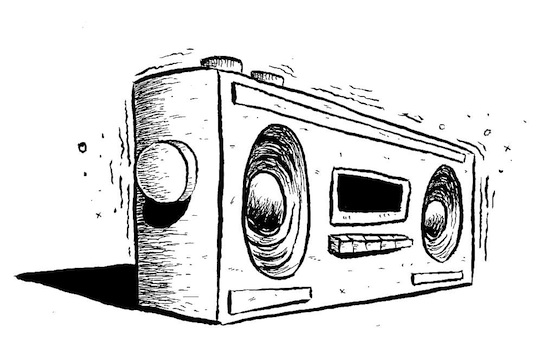 Since April 2010, Disquiet.com has hosted a monthly project called “Sketches of Sound,” in which illustrators, many of them comics artists, are invited to draw a sound-related object. I post the drawing as the background of my Twitter account, twitter.com/disquiet, and then share a bit of information about the illustrator back on Disquiet.com. Call it “curating Twitter.”

This, the 21st entry, and final entry for 2011, features a boombox by Jaime Crespo:

Born about a zillion years ago in the region of the world now referred to as California, Jaime Crespo, a non-award-winning cartoonist, has been writing, drawing, and publishing comics for over thirty years. Okay, he’s been drawing and writing them for a heck of a lot longer than that and he has had a number of publishers, editors, and the like but never really enjoyed answering to “the man.” So, in the punk rock DIY spirit, Mr. Crespo has appeared in loads of self-published comic books as well as others anthologies, weekly newspapers, magazines, art magazines, and a whole slew of stuff you’ve probably never heard of and he continues to do so, unabated in spite of his age, ailing health, and tenuous grasp on reality. Mr. Crespo is also a pet owner. jaimecrespo.com

The Psychic Ambience of the Holidays (MP3)

The polar extremes of the holiday season are remarkable for their seeming incongruity, perhaps most notably in terms of psychic ambience: on the one hand, a manic consumerism; on the other, a sense of reflection and hushed anticipation. Guy Birkin ponders the latter by taking existing seasonal recordings, a pair of them, and forming from them something new, something singular.

Both of his chosen source documents are explicitly seasonal. There’s a church choir and there’s a brass band. The congregation sings “Hark! The Herald Angels Sing” and the band plays “Once in Royal David’s City.” The choir is accompanied by a pipe organ. The brass band, on the other hand, is accompanied by various externalities: that recording was made from a distance and is infused with everyday noise. The resulting work, which Birkin titled “Christmas Ambience,” is very much an extended take on the latter approach to sound, in which context seems to submerge text, yet where the result is an aura with more meaning, more feeling, than the text might have ever had on its lonesome. It’s a slow, solemn piece, yet it seems to glisten in its seeming stasis:

Bikrin also provided some explanation for how he accomplished his piece:

The recordings were pitch-shifted and stretched with FFT, then layered together and the process repeated. The original version of this track was over 18 minutes long, but the most interesting section was its beginning in which the choral and brass sounds are barely audible above the background noise. It took quite a lot of work to simplify the track and concentrate only on the most ambiguous sounds.

Track originally posted for free streaming and download at soundcloud.com/notl. More on Birkin at twitter.com/guybirkin and aestheticcomplexity.wordpress.com.