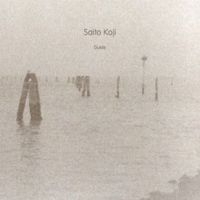 A new year calls for a stellar dawn, a gaping-maw drone that captures the power of change caught at its attenuated fulcrum, when night turns every so slowly into daylight. In other words, it calls for Saito Koji‘s Guide, his recent release on the estimable restingbell.net netlabel. The album contains eight drones, all slow as could be, and brief, too, keeping to under three minutes (not unlike the approach undertaken on the Instagr/am/bient compilation). There are occasional beats to be heard here, like the echoed presence of what sounds like a wooden stick rattling on a track titled “Saihate,” but otherwise this is music that locates the white-noise space between cicadas and church organs. And though the three-minute maximum length keeps the project as a whole moving, there are no admonitions against setting any one of them on loop. Here, by way of example, is “Peace,” which has a circulating melody that sounds like a bellow instrument, and a thick wash of what could be a nearby waterfall (MP3).

Get the full release from Fukushima, Japan”“born Koji at restingbell.net.