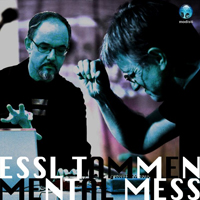 In a clear case of more allowing for less to occur, the team-up of powerhouses Karlheinz Essl and Hans Tammen is a rich improvisation between the former’s laptop and the latter’s computer-processed guitar. To listen is often to hear neither, and to forget frequently that anyone, let alone two people, is playing. The opening track, “Brutz,” is often little more than flittering nuances. The guitar evaporates in the laptop’s processing, and the dual computers yield slivers of sound, drones that might just be the result of an ungrounded line, effects that could be artifacts in the sound recording. There’s a moment, for example, in a track titled “Prelock” when it sounds as if we’ve left the concert hall (the work was recorded live at Harvestworks in New York City back in May 2010) and wandered down to the subway. Elsewhere, there’s a point in “Nomisola” when piano chords are heard, but they drift away, subsumed in the nether-absence of obfuscating noises and general compositional entropy. Later, in the same track, what might be a guitar chord but resembles an archival orchestral recording gets tossed here and there like seaweed as it nears a shore, where it will soon dry and, soon enough, flutter away.

Get the full set as a Zip archive. More information, including helpful liner notes, at the modiste.com netlabel. More on Essl at essl.at, and on Tammen at tammen.org.