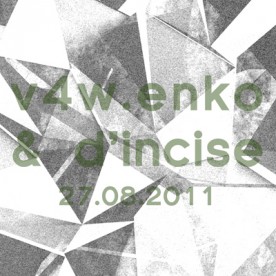 The pairing of v4w.enko and d’incise was a fine idea: Two musicians who embrace elliptical artistic identities and are given to remote, low-key sounds, working together. Their live effort, just released for free download on the great restingbell.net label, features the former employing algorithms in the service of generating drone-like figures, and the latter employs contact mics toward something more visceral and fractured. Somewhat rare for live electronic music, the listener can imagine with some certainty who is doing what as the performance proceeds. The recording’s title is simply the date of the performance, 27.08.2011, while its pair of tracks take for their names simply the length of their respective duration (“21’59”” and “34’12””). The whole thing occurred at Tivoli 16 in Geneva, Switzerland, where d’icise lives and works — v4w.enko, aka Evgeniy Vaschenko, is from Kiev in the Ukraine. This is the first (MP3) of the two pieces:

Get both tracks at restingbell.net, where the liner notes include this explanatory material:

Conception notes Two spaces, two languages, two focal points, getting so close as synthetical and natural, but never touching. The first space is black & white, minimal and symbolic. It talks about the beauty of color inside the sound and complicated structures but it has not colors in itself. It is a sort of counterpoint, a reference, a cold therory demonstration, a base of reflexions. The second space could show colours of structures and physically complicated sounds. The rules that generate them might be very complex, and though unnecessary to be explain. The human perception comes first, on it’s own, at this level. The first space is more unpretentious and selfgenerateed, the second requires more finely tuned work to take form. But in the end the two spaces are not in conflict. None has more value than the other. They happen separately and simultaniously. The sound reflects this relation, a contrasted proposition between automatic processiong, fixed layer, digital and physical. Structure Live audio in the real time. Live treatments of various objects & contact mics. Max/msp code in algorithmical sounds.

END_OF_DOCUMENT_TOKEN_TO_BE_REPLACED 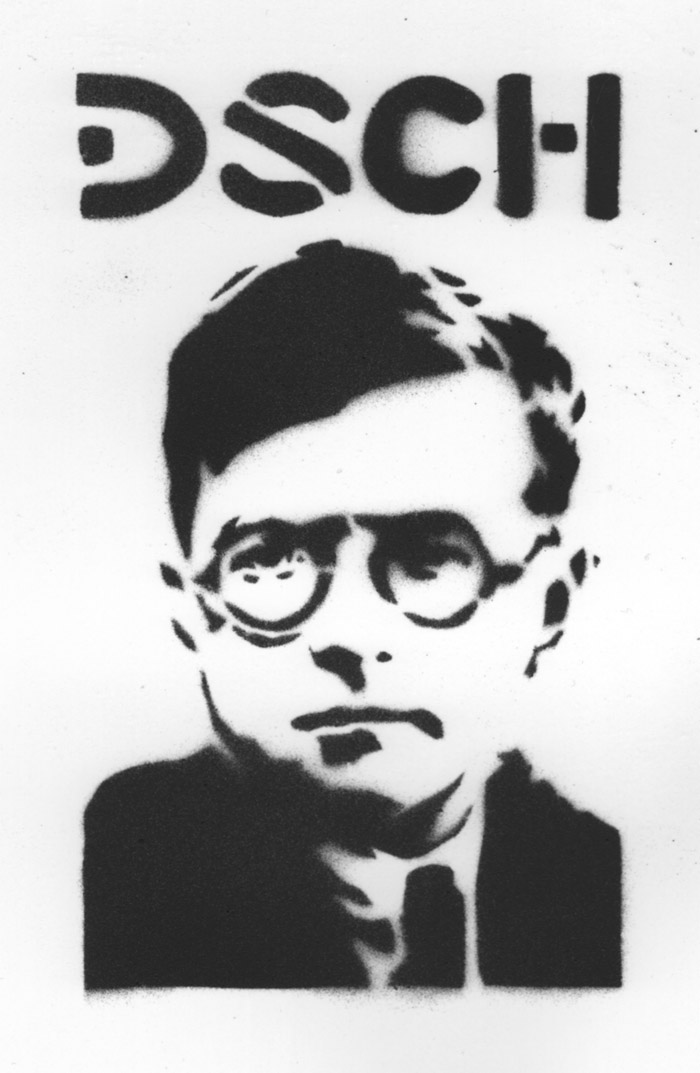 When considering the 13th Disquiet Junto project, it’s helpful to remember that the subject material is itself a remix. The Disquiet Junto is a Soundcloud.com-based group in which musicians respond each week to a proposed compositional project. The 13th such project involves reworking a recording of the first movement of the Chamber Symphony, Op. 110a, by Dimitri Shostakovich. The source audio was recorded live by the ensemble wild Up. The project was announced on Thursday, March 29, and is due by 11:59pm on Monday, April 2.

I usually wait until the end of a Junto project to comment on it, but this one is special, so I want to get some thinking out while it is still in progress. It is is worth thinking of the Chamber Symphony as a remix unto itself, because the symphony is an arrangement by another man, Rudolph Barshai. With Shostakovich’s blessing, Barshai took the contours of Shostakovich’s String Quartet No. 8 and expanded them into something orchestral. Likeiwse, with the full permission of the Los Angeles chamber ensemble wild Up, the Junto participants are extrapolating from the wild Up recording of the Barshai’s symphonic version of Shostakovich’s quartet. If that sounds meta, then I am accomplishing at least part of my goal.

This 13th Junto project is a particularly special one, because it’s only the second time we are working from not only a commercial release, but from constituent parts of a track on that release. (The previous time was when Marcus Fischer, for the fourth Junto, provided stems — that is the music-production terms for individual subparts — of a song off his Collected Dust recording.) This is an essential distinction. Much “remixing” these days means working with the commercially released version of a piece of music, a single track: cutting it up, moving pieces around, transforming it, adding to it, subtracting from it. But in the case of both the Fischer project and, now, the Shostakovich project, the Junto participants were provided the pieces from which the commercial track was constructed. The wild Up recording of Shostakovich was done live, so the “parts” are in fact 10 simultaneous recordings of the symphony, recorded on variously placed microphones. The folder containing these parts looks like this: 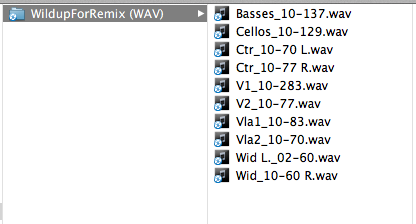 For the time being, those recordings are freely available for download, and even if you are not participating in the project as a musician, I highly recommend giving them a listen. They’re available at each of the following URLs:

To hear the performance 10 times from different vantages is to get a Rashomon version of the piece. In part, it is simply an opportunity to hear it akin to how the performers hear it: if you listen to the woodwinds, then you’re hearing it sort of how a member of the woodwind portion of the ensemble heard it while it was being performed. But more importantly, to listen to it is to hear different parts of it come to the fore. Because it was recorded live, there is no clear “isolation” between parts. In each of the tracks you hear the entire work, just with different sections given different relative prominence.

Listen to the original recording, also streaming below, at: wildup.bandcamp.com

And for comparison’s sake, here is a performance of the String Quartet No. 8 by the Kopelman Quartet, via youtube.com:

The remixes are unfolding at this very moment at soundcloud.com/groups/disquiet-junto.

The Assignment: Remix a Shostakovich recording by the ensemble wild Up.

This assignment was made in the afternoon, California time, on Thursday, March 29, with 11:59pm on the following Monday, April 2, as the deadline.

These are the instructions that went out to the group’s email list:

Plan: For the 13th Disquiet Junto project, we’ve been given something special. This is a shared-sample project. There is a tremendous classical chamber-music ensemble in Los Angeles. Its name is wild Up, and it has provided to us the first movement of its recording of the Chamber Symphony, Op. 110a, by Dimitri Shostakovich. Better yet, wild Up has provided to us the individual stems from a live multi-track recording of the symphony. There are 10 tracks in all, ranging from the bass to the woodwinds, and everything in between. There is no isolation between tracks. What there is is an emphasis on different aspects of the ensemble — and, thus, of the original composition. You are invited to make something new from this source material. Please use only the source material — as few or as many of those 10 source tracks as you desire.

Samples: The source audio is downloadable from these URLs:

Length: Please keep your piece to between two and seven minutes in length.

Title/Tag: When adding your track to the Disquiet Junto group on Soundcloud.com, please include the term “disquiet0013-wildup”in the title of your track, and as a tag for your track.

More on wild Up at:

Listen to the original recording at:

The Assignment: Record an everyday mechanical rhythm, and make something of it.

The 11th weekly assignment had been on my mind since early in the development of this series: to take an existing everyday sound and to make something of it. We’d explored that idea previously from various different approaches. The very first project involved an especially mundane source audio: ice cubes in a glass. The fifth, a personal favorite, required participants to add sounds to an unedited recorded document of real life. Many other projects employed source audio from the real world. This time, though, the source audio was intended to serve a very specific role: a rhythmic undergirding to the track. In one way, this was an unusual proposal, because by requiring a rhythm, it was perhaps the first project that suggested aesthetic context. Previous projects had left it up entirely to the participant whether or not there would be an inherent rhythm to their track. As I said at the time of its unfolding, if any Disquiet Junto project could be collected into a standalone album, I’d say this is the one.

The assignment was made late in the day on Thursday, March 15, with 11:59pm on the following Monday, March 19, as the deadline. View a search return for all the entries: disquiet0011-motoring. As of this writing, there are 42 tracks associated with the tag.

Disquiet Junto Project 0011: Daily Rhythm Instructions: Deadline: Monday, March 19, at 11:59pm wherever you are. Plan: The eleventh Junto project requires you to make an original field recording, and to then make something of it. This project focuses on rhythm. The field recording should be of some rhythmic mechanical sound from everyday life: a dishwasher, a car’s turn signal, a hard drive, a bicycle, whatever you choose. That recording should serve as the main rhythmic element of your track. You can edit the recording, certainly, but it should remain recognizable; you should only edit it to whittle it down to a core rhythmic section. To it you can add whatever sounds you like, but the rhythm should be central and prominent in the finished track. Length: Please keep your piece to between two and five minutes in length. Title/Tag: When adding your track to the Disquiet Junto group on Soundcloud.com, please include the term “disquiet0011-motoring”in the title of your track, and as a tag for your track. Download: As always, you don’t have to set your track for download, but it would be preferable. Linking: When you post your track, please include this information: More details on the Disquiet Junto at: http://soundcloud.com/groups/disquiet-junto/

The projects ranged widely in their source audio, including a door, car fan control, clothes dryer, potato slicer, multiple hard drives, and microwave beep, among many others. One highlight was a track built around a bicycle wheel, which included a video, shown up top. The track, posted at soundcloud.com/emremeydan, is by M. Emre Meydan, who has been providing the Turkish translations to the weekly projects.