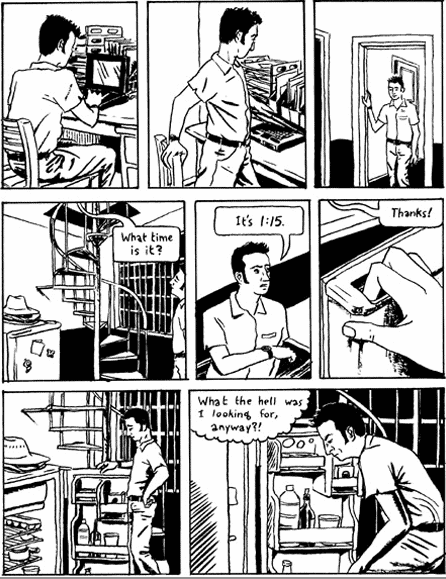 This assignment was made in the afternoon, California time, on Thursday, April 5, with 11:59pm on the following Monday, April 9, as the deadline.

These are the instructions that went out to the group’s email list:

Subject: This project, the 14th in the weekly Disquiet Junto series, is about sonic narrative.

Instructions: You will re-tell a very short and simple story — an anecdote really, an everyday slice of life — utilizing sound. It will take the form of a single audio file uploaded to your Soundcloud account. You will construct this track in any manner you choose: with field recordings, music, effects, dialog, or a mix thereof. The story you will be re-telling is this single-page comic strip by Matt Madden:

In the process of re-telling the story through sound, you may interpret it in any way you choose. You can do it as straight narrative, or do an abstract rendition, or retell it from another point of view, or contribute a score as if it were a movie, or a record series of foley cues. The choice is yours.

Background: Matt Madden’s single-page comic is the template for a book he created titled 99 Ways to Tell a Story: Exercises in Style. In the book, Madden told that same story 99 different ways, each in a different comic-book style. For example, he told it as a superhero comic, he told it as a manga, he told it as experienced from upstairs, and he told it as if it were overheard at a bar. Madden did this in homage to the French writer Raymond Queneau’s own Exercises in Style, which is a key text of the literary movement known as Oulipo. Oulipo approaches the act of writing with intentional constraints, and the movement’s approach to creativity was a strong influence on the development of the Disquiet Junto. Oubapo is the name of the comics version of Oulipo. What we’re up to is the musical version: Oumupo

Length: Please keep your piece to between two and seven minutes in length.

Title/Tag: When adding your track to the Disquiet Junto group on Soundcloud.com, please include the term “disquiet0014-oumupo”in the title of your track, and as a tag for your track.

More on Matt Madden and his book 99 Ways to Tell a Story at: