The Assignment: Make music from a recording that is initially considered to be silent. 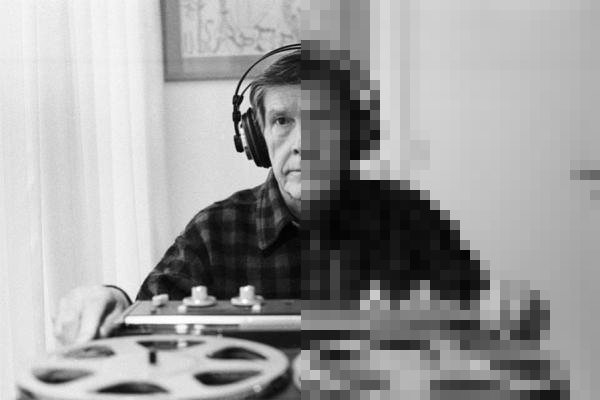 This week’s project tackles the concept of silence, which by most measures is in fact a relative term, a term in regard to perception rather than some actual objective absence of sound. The major 20th-century milestone in our understanding of silence is arguably the (perhaps apocryphal) story told by the late John Cage of entering an anechoic chamber, expecting to hear nothing, and instead hearing sounds emitted from his own body. In this project we will take recordings of perceived silence, push them until the noise within the silence reveals itself, and then make music from that noise. Cage, pictured above, would have turned 100 this year, and this project is in his memory.

The assignment was made late in the day, California time, on Thursday, July 26, with 11:59pm on the following Monday, July 30, as the deadline. View a search return for all the entries as they are posted: disquiet0030-nonsilent.

Below are the instructions that went out to the group’s email list (at tinyletter.com/disquiet-junto). They appear below translated into five additional languages: French, German, Japanese, Spanish, and Turkish, courtesy of Ã‰ric Legendre, Allan Brugg, Naoyuki Sasanami, Norma Listman, and M. Emre Meydan, respectively.

This week’s project deals with the concept of silence — specifically recorded silence. We will take a segment of audio that is intended to signify silence, and then from it make an original piece of music.

Step 1: Select a segment of recorded sound that would generally be perceived as silent. Examples include: the gap between tracks on a tape cassette or vinyl record, the noise your laptop’s headphone jack emits when nothing is playing, the quietest moment in an MP3, a radio signal when nothing is supposed to be heard.

Step 2: Amplify or otherwise magnify that supposed absence of sound until it makes a perceivable noise.

Step 3: Compose, perform, and record a new original piece of music that takes this sound as its sole source material. You can manipulate the original audio as you see fit, but you can’t add other pre-existing audio elements to it.

Length: Please keep your track to between 2 and 4 minutes in length.

Information: Please when posting your track on SoundCloud, please include a description of your process in planning, composing, and recording it. This description is an essential element of the communicative process inherent in the Disquiet Junto.

Title/Tag: When adding your track to the Disquiet Junto group on Soundcloud.com, please include the term “disquiet0030-nonsilent”in the title of your track, and as a tag for your track.

Linking: When posting the track please include this information:

More on the 30th Disquiet Junto project at:

Music from the Forum (MP3)

Finding the music in a vinyl record's locked groove

The Internet giveth, and the Internet giveth. Yesterday I made note of a nicely recorded loop of a vinyl album’s locked groove, made by John Dombroski, who — in the process of archiving the 50 or so repeats of the skip as the needle passed over the same spot — noted that remixes of the audio would be appreciated. Shortly thereafter, Larry Johnson did just that. Interestingly, Johnson focused not on the skip so much as on the reveal, at the end of Dombroski’s track, when the music from the album suddenly flourishes, like it’s come out of hiding. In the original version, the music is a bit like a glass of cold water after a trek across the desert; it happens at the very end. In Johnson’s, the reveal happens repeatedly, in a more subdued manner, and out of a drowsy miasma that’s a deep filtering of the original recording’s beat. Here, Johnson has reversed the original, making the occasional reappearance of the musical material the track’s internal metronome.

Track originally posted for free download at soundcloud.com/l-a-j-1. More on the source track: “Repetition Is a Forum for Change.”

7 acts booked for a night of electronically enhanced glass harmonica 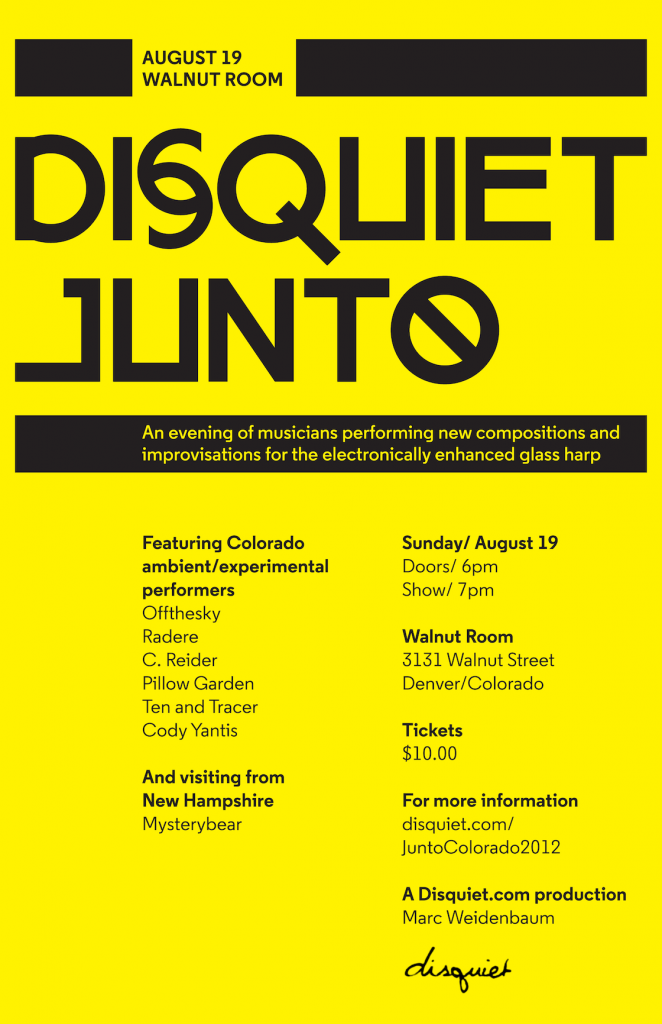 This coming August 19, a Sunday, we’ll be hosting a Disquiet Junto concert in Denver Colorado at the Walnut Room. It’s billed as “An evening of musicians performing new compositions and improvisations for the electronically enhanced glass harp.” These fine Colorado ambient/experimental performers are featured:

And there’s a special guest visiting from New Hampshire:

Doors open at 6pm, and the show begins at 7pm. The Walnut Room is located at 3131 Walnut Street in Denver, Colorado. The tickets will cost $10. More on the venue at thewalnutroom.com. Special thanks to C. Reider and Carl Ritger (aka Radere) for assistance in putting this together. Details will be added to this page as the event approaches. If you’d like to spread the news, please use this URL: disquiet.com/JuntoColorado2012. There’s also a facebook.com event page. The above poster is by Boon Design (boondesign.com).

All the acts will perform two works: one drawn from the Disquiet Junto series of weekly projects, and a recent piece of their own they’d like to share with the audience and their fellow musicians. The Junto project involves treating the sounds of a glass harmonica, the instrument that held a special interest for Benjamin Franklin, from whose own Junto society ours borrows its name. This is the same format as the concert held in Chicago earlier this year, back in April, but with a whole new set of performers. Concerts are also in various stages of planning for San Francisco and Portland.

Repetition Is a Forum for Change (MP3)

The track is rhythmic, like a municipal light rail passing in steady rain on a quiet street. There’s a crunch to it, the leaden beat of something hit repeatedly yet resilient enough to show little if any resulting damage. Through headphones, the noise expands; it comes to span the sonic periphery despite its inherent delicacy. You hear the beat, but you listen through it as well, first to the broader, textural noise, and then to the beats within the beat, to the shape of the beat. In time, the beat regains its centrality, and new questions emerge: Does the beat give a little, sway a little, on occasion? Is there a nudge toward development? What in fact is it?

It’s the sound of a locked groove on a vinyl recording, taped by John Dombroski not only for posterity, enjoyment, and analysis, but also with the intention that others might rework it, might make music from the absensce of music. We know from Brian Eno and Peter Schmidt’s Oblique Strategies card deck that “Repetition is a form of change.” In Dombroski’s gambit, it is also a forum for change. In his brief accompanying note he states:

Record player needle in locked groove repeats (~1.8 seconds) 55.5 times and resolves. NOTE: (If you would like, go on and make a remix of this sound and share it – I’d love to hear).

Track originally posted for free download at soundcloud.com/johndombroski. More on Dombroski, who is based in Richmond, Virginia, at dombroskij.com.

The Conqueror from Darmstadt

A malevolent post-drone from Phirnis

For gaping-maw, devil-in-the-machine, end-times background listening, you could do worse than “Conqueror” by Phirnis, a musician from Darmstadt, Germany, whose account on Soundcloud lists him solely as one K.G. The track is three and a half minutes of radio-static-during-a-windstorm chaos, all churning white noise and helpless rattling, and a slowly impinging malevolent howl that suggests all will not end well. It’s a welcome swatch of non-rhythmic industrial music, neither as formless as pure drone — are we entering the realm of the post-drone? — nor as descriptive as a proper song. It’s somewhere in between, not so much a soundtrack as the sound design of a dark, arduous, fictive scenario.