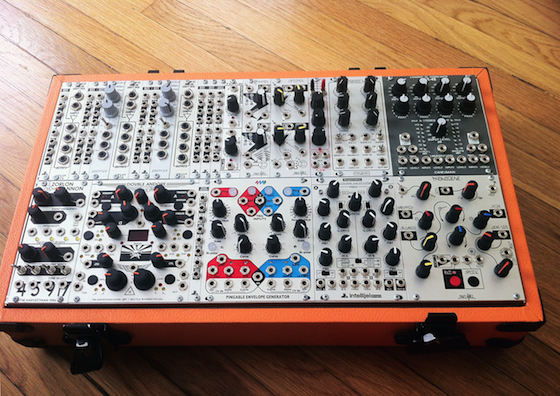 Keith Fullerton Whitman is a maximalist even when he’s a minimalist, a DJ, or (at the online retail store he runs, Mimaroglu Music Sales) a purveyor of physical recordings. There is a sense of expansiveness that informs — that exudes from — his work, and this may never have been more the case than with “120620.” That’s the title of work for modular synth that he posted for free download. It is, in his description, “an uninterrupted 5:43:30 transcription (in stereo) of a particularly nice patch built on the ‘voight-kampff machine’ (pictured) on 06/20/12, recorded whilst i was out having lunch in davis square (i.e. unobserved, unmoderated, untouched, unheard, etc).” As one commenter noted, SoundCloud — where the track was posted — doesn’t list times to the 100th of a second. That’s a nearly six-hour recording of a modular patch running on automatic. Beyond the sheer ever-shifting pleasures of the work, there’s the unique bonus of a sense that Whitman is, in effect, as much a member of the audience as we are, discovering it from a not dissimilar station: “everyone skip to 3:33:33 – this part is AWESOME,” he notes in one comment, as if he had just himself stumbled upon it.

Track originally posted for free download at soundcloud.com/kfw. More on Whitman at mimaroglumusicsales.com and keithfullertonwhitman.com.