Natalia Kamia of Gothenburg, Sweden, is racking up some fascinating listening on her soundcloud.com/kamikuma account.

“Gunpowder Tea for One” sounds nothing like a piano. It sounds more like someone triggering explosions on a galavant across an open field. The explosives association may in large part be due to the term “gunpowder” in the title, but the power of words only fuels associations so far — the brief explanatory note states that the track is a “piano recording on steinway converted,” yet even allowing for a broad meaning of the word “converted,” the presence of a Steinway piano here seems quite distant. 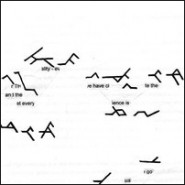 The piano, albeit at high speed, is more recognizable in “Invisible Study X,” which was included along with a bio of Kamia at the invisibledialogues.org site, which documents an installation in which she participated in early 2011. The piece is the result of piano edits executed in response to an original graphic score, a detail of which appears to the left.

“Aeolian Hang of Ecut, Pasodoble Chimes” is describes in a brief liner note as “audiomulch recording of sample fragments looped simultaneously- chords and melodies hunt.” It’s one of several such experiments in muted metal percussion, some more linear than others. The extent of the processing limited, leaving an unembellished sound.

More on Kamia at nataliakamia.blogspot.com.