Talking About, and Within, the “Next” SoundCloud

Perhaps the weirdest thing about the redesign of SoundCloud is the presence of my face.

The SoundCloud.com service has gone live with its “next” version, which I’ve been watching develop in recent months thanks to beta access to changes as they iterate. Though the service’s new version is now fully public, it isn’t fully implemented. For one thing, iteration is continuous. More specifically, though, certain things have gone missing, like the discussion space in “groups” pages. SoundCloud groups provides the infrastructure for the weekly music-project community that is the Disquiet Junto, so I pay particular attention to how it is changing. Here is the current state of the Groups page: 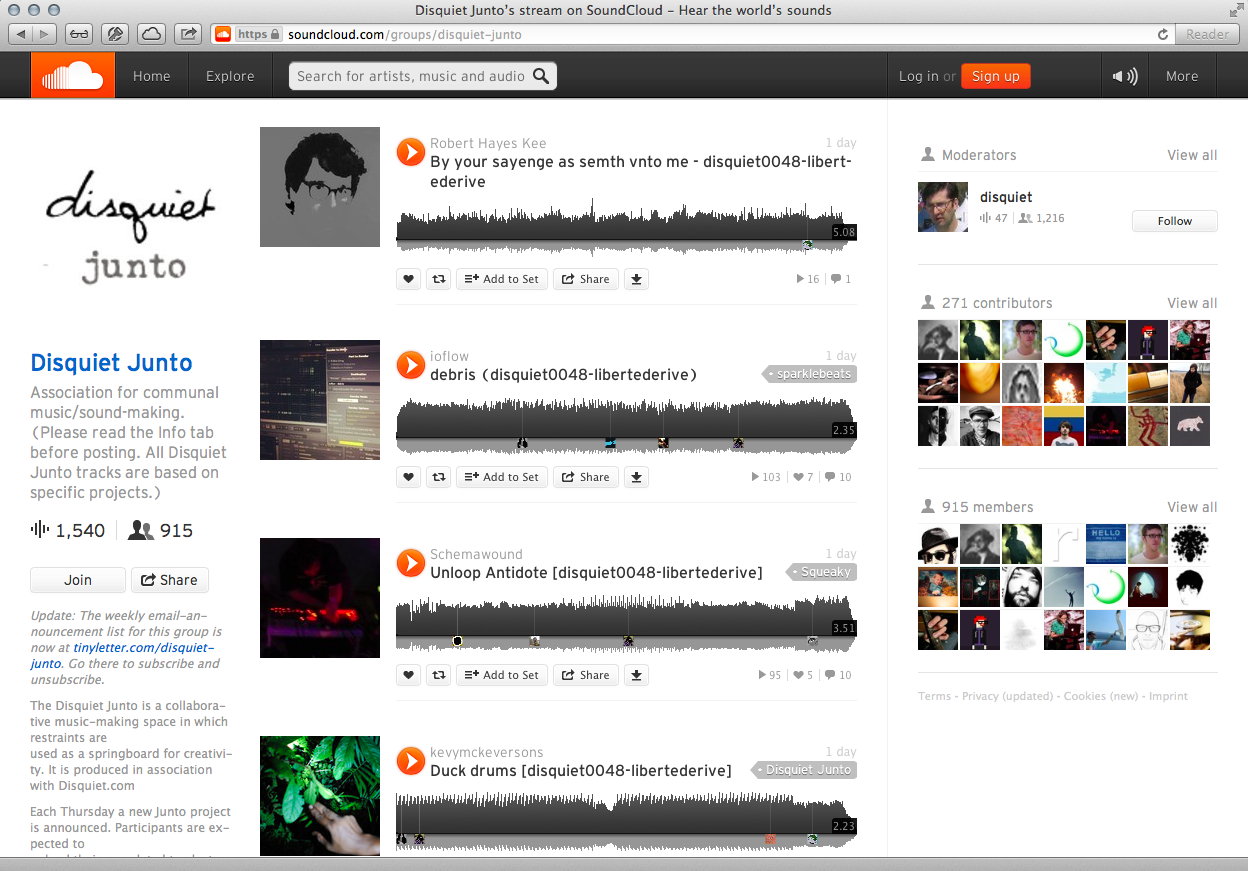 And here is the previous version — note the use of tabs, which have now gone away: 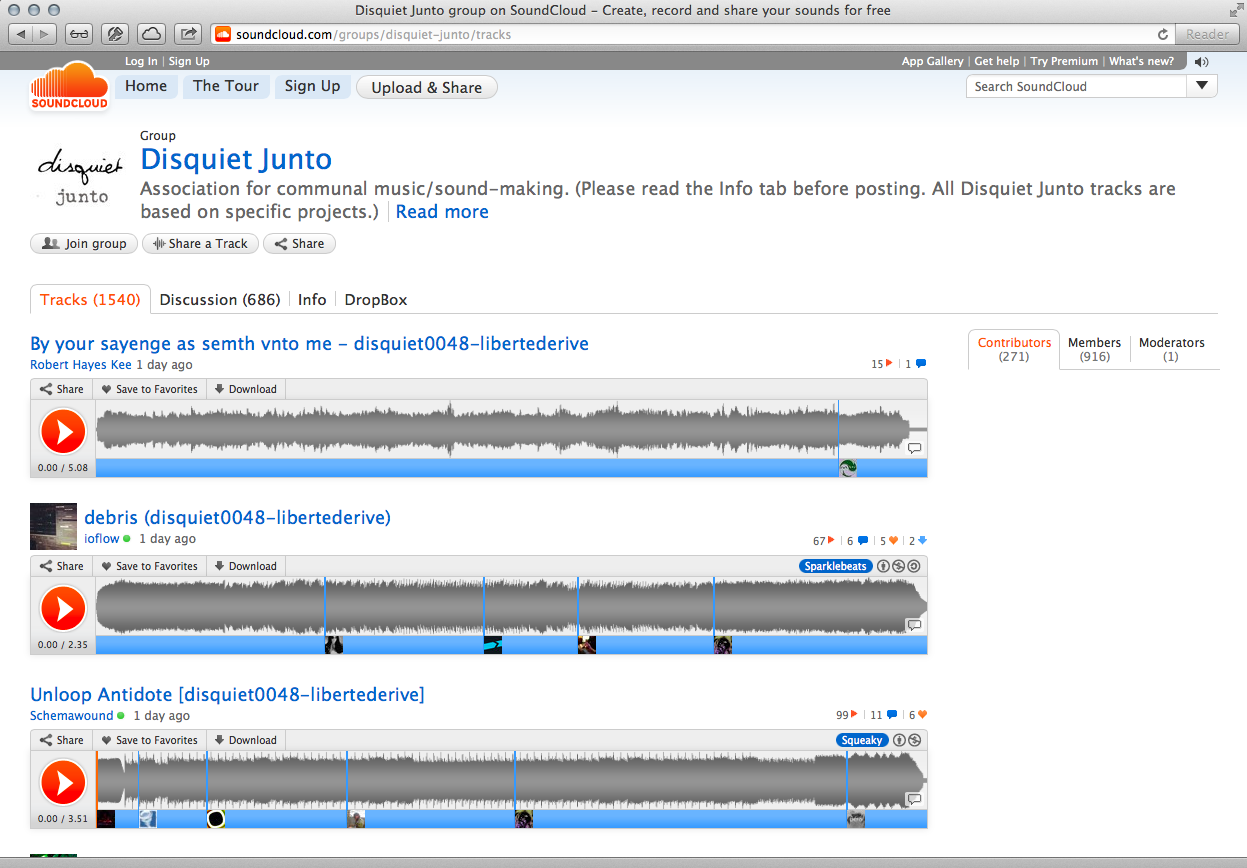 There is a lot of change evident in the new SoundCloud, but one thing that stands out in the design is the increased attention to the role of listeners. This is particularly evident in the “repost” tool, which lets listeners take a track from someone else’s account and slip it into their own stream. The SoundCloud interface has long suffered from a situation in which the pages of listeners haven’t had much to them; the repost tool changes that. The reposting is just the start. There’s also a new version of “sets” in SoundCloud. It used to be that one could only create sets of one’s own tracks, but now anyone — notably those who listen rather than upload — can create sets of any tracks they want. This recognition of listening as an active means of participation is important to the growth and maturation of SoundCloud.

But perhaps the weirdest thing about the redesign of SoundCloud is the presence of my faceÂ — see the bottom right: 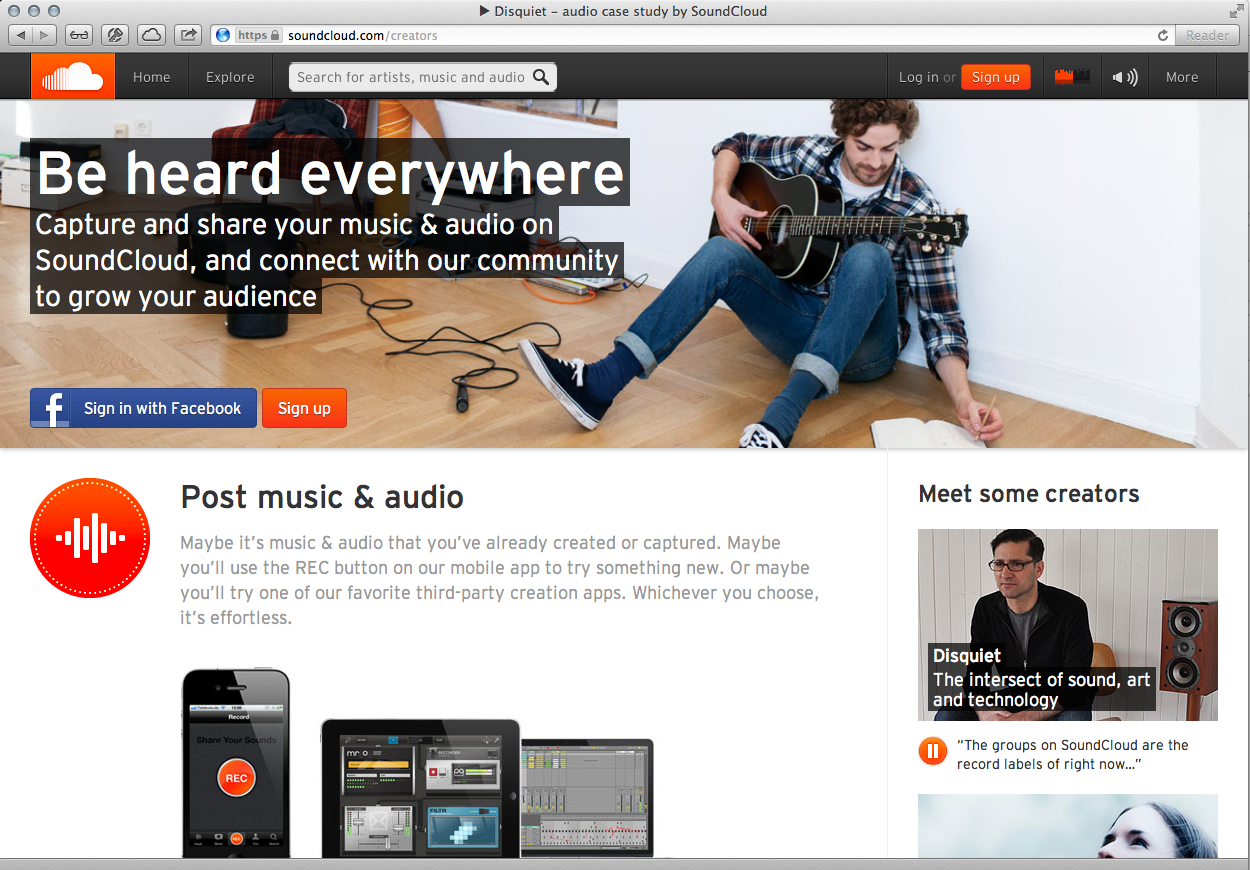 Over at soundcloud.com/creators, the service has begun rolling out a series of interviews with people who use SoundCloud. So far there are three of these interviews, and they’re quite different from each other, which works well in making it clear that SoundCloud isn’t just about uploading one’s finished record (a la Bandcamp) or amassing “adds” (a la the original MySpace). There’s a bit about a university that uses it for its multifaceted podcasting; they discuss the move from merely uploading lectures to “shorter, documentary-style podcasts with researchers,” to a more formal, fortnightly news podcast, to documentation of the university’s music events, among other endeavors. And there’s an interview with a singer-songwriter, Cyra Morgan, who does a good job of summarizing the manner in which the casual communal aspect of SoundCloud has allowed her to take risks: “It feels safe even though the music isn’t perfect, even though it’s in its most vulnerable state.”

And then there’s me, yapping about the way the SoundCloud service helped give birth to the Disquiet Junto:

These interviews are being posted at the company’s own, recursively titled soundcloud.com/soundcloud account. I knew this was coming, of course, because I submitted to the interview, but I wasn’t sure when it would pop up. I happened to learn that the interview had gone live this morning when Peter Kirn mentioned it in his detailed analysis of the new SoundCloud interface at createdigitalmusic.com.