From metal machines to a score for tai chi

Lou Reed, cofounder, singer, and songwriter of the Velvet Underground, passed away today at the age of 71. He was a key figure in the pre-punk era of rock’n’roll, which stripped artifice in favor of rudimentary chord progressions and urban narrative. But because contradictions are at the heart of culture, Reed and his band also provided an important bridge between the worlds of rock’n’roll and contemporary art.

Much has been made of Reed having said, “One chord is fine. Two chords is pushing it. Three chords and you’re into jazz.” The comment is often referenced in favor of rock music that has an distinct disinterest in melodic, harmonic, and structural complexity. But one chord, at least in the metaphoric sense, also provided the foundation of some of Reed’s least rock-like recordings, music that aspired to an ambient state: his 1975 noise classic, Metal Machine Music, and his 2007 collection of contemplative soundscapes, Hudson River Wind Meditations.

The latter is a collection of meditative recordings — white noise in contrast with Metal Machine Music’s white heat — that he composed for his own tai chi practice:

The former is one of the most debated albums by a major rock musician. Many see it as a prank, an album of sonic violence that goes beyond merely challenging the ears of its audience. Such dismissal doesn’t explain why Reed returned to the music decades later, or how industrial rock, free improvisation, and noise music made good on the once isolated manifesto. That said, the perception of it as a prank assists in setting Metal Machine Music alongside John Cage’s 4’33”, another perennially reviled work: a wall of impenetrable sound to match Cage’s transparent silence:

The Project: Musicians post recent tracks with the express purpose of getting constructive feedback. 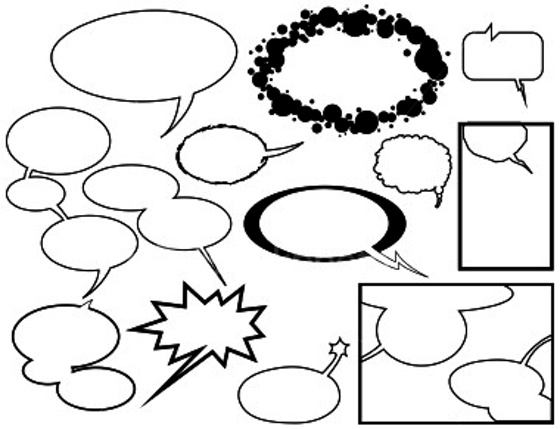 This assignment was made in the afternoon, California time, on Thursday, October 24, with 11:59pm on the following Monday, October 28, 2013, as the deadline.

This week’s Disquiet Junto project is fairly open-ended. You don’t need to create a new track, necessarily. What you need to do is to post a single track, a relatively recent one, that you would like feedback on from your fellow music- and sound-makers in the Disquiet Junto.

There are three steps to this project, and each step is equally important:

Step 1: Upload a track. Please do not post a track that has previously appeared in the Disquiet Junto.

Step 2: When filling in the various informational fields, be sure to write in some length a description of your process in planning, composing, and recording it. This description is an essential element of the communicative process inherent in the Disquiet Junto.

Step 3: As tracks are added by other musicians, be sure to comment on at least two or three of them. The more people who participate, the stronger the feedback and conversation will be.

Length: Your track should have a duration of between one and six minutes.

Title/Tag: Include the term “disquiet0095-discussamongst”in the title of your track, and as a tag for your track.

More on this 95th Disquiet Junto project, in which musicians post recent tracks with the express purpose of getting constructive feedback, at: 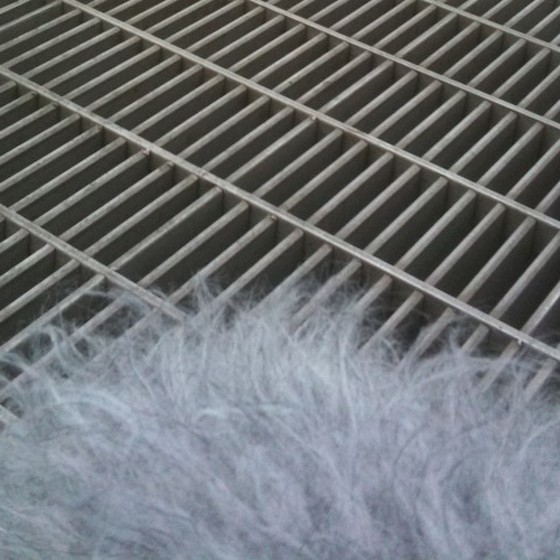 Grand Central Station is for much of the day and night a place of contast motion, myriad motions, bodies and trains heading along countless trajectories. Up close it can feel like being at the center of a hurricane. From a distance, it can be a delirious blur. In the microphone of Sepulchra, aka Michael Raphael of Brooklyn, it is a rich white noise punctuated by footsteps and a monotone public address announcer.

Circle Round Berlin as if with Tilda Swinton 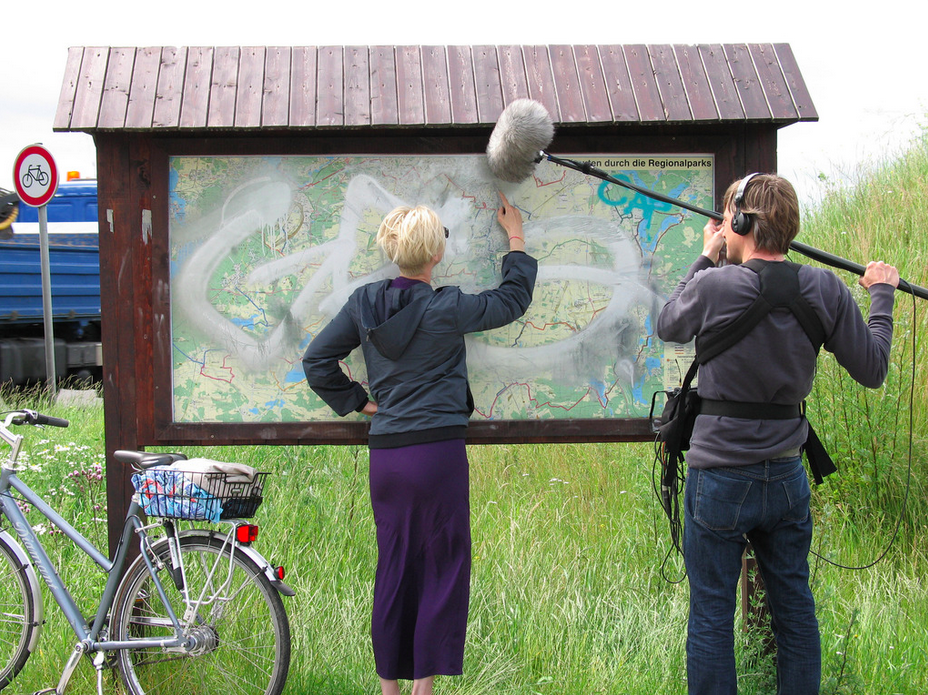 When the 2009 film The Invisible Frame was being made, Simon Fisher Turner did some field recordings of the production. The movie, by director Cynthia Beatt, follows Tilda Swinton as she bikes around Berlin — literally around Berlin, in that she is following the path that had once been the Berlin Wall. Writes Turner of his part of the project: “I shot the sound as they filmed and every evening I made a new piece from the day’s rushes. We went to many locations around the invisible wall and its remains. For about an hour I was allowed to wander unsupervised and recorded whatever I wanted. This recording is an edited version of the master.” The recording he mentions is his contribution to the great Touch Radio podcast. His is the 99th in the series. It’s about half an hour of industrial noise, aural signs of life where there had once been an armed silence (MP3).

Track originally posted at touchradio.org.uk. More on the film at invisible-frame.com. More from Turner at simonfisherturner.com.

This Poster Is a Test. It Is Only a Test.

A tribute to San Francisco's Tuesday noon siren â€” designed by Brian Scott, with contributions from Heimo Schmidt, Nick Sowers, and yours truly 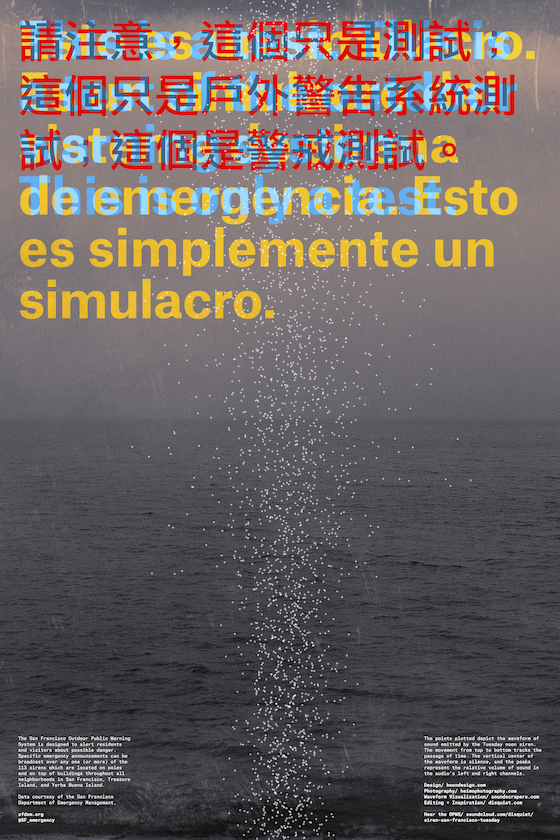 Every Tuesday at noon in San Francisco, California, a siren rings out, after which a voice provides some modicum of comfort by explaining that the siren was a test, only a test. The siren is part of the city’s Outdoor Public Warning System. Brian Scott of Boon Design decided to treat the siren as a symbol for the city — that is, what R. Murray Schafer would have called a “soundmark,” or the sonic equivalent of a landmark — when he responded recently to a call for posters by AIGA SF, the local branch of the professional association for design. The poster project, titled AIGA InsideOutSF, explains itself as follows: “A curated exhibition and silent auction of original posters by some of the most influential San Francisco Bay Area and international creatives, revealing their personal impressions of San Francisco.”

Brian put together a small crew for his poster, which appears up top. The photography, with purposeful echoes of Hiroshi Sugimoto’s sublime horizons, is by Heimo Schmidt. Additional key reference points include Vija Celmins’ graphite drawings of waves and Michael Snow’s 1967 film Wavelength. The waveform, shown at a 90 degree angle from its usual horizontal mode, cascades down the center of the image. The waveform is portrayed as a series of crosses intended to connect the wave to the idea of a map — to align the waveform with 113 sirens distributed around San Francisco (see the map below). This waveform visualization was accomplished by Nick Sowers. As for my role, I weighed in with ideas, writing, and editing. The text on the poster shows the announcement in the three languages it is heard in: primarily English, but also Cantonese and Spanish. The layering is intended to get at the distortion inherent in many of the city’s speakers, and at the overlaying and echo effect of adjacent speakers. 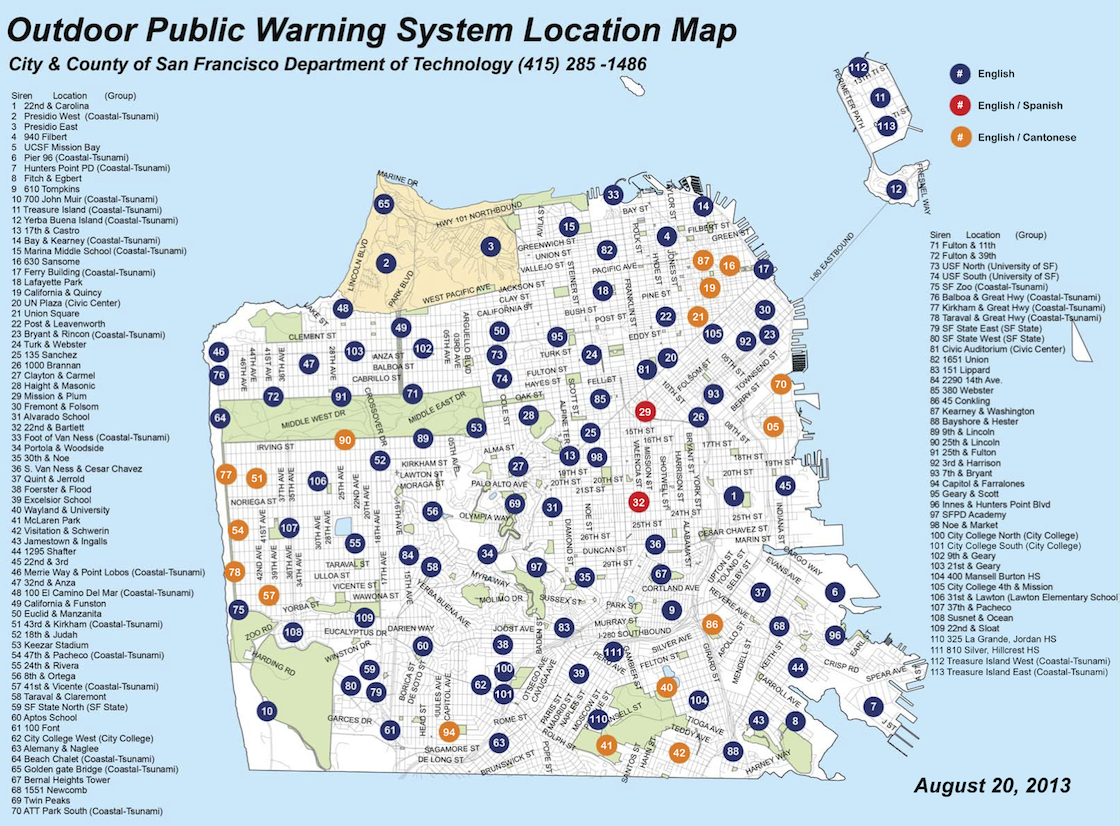 And because the web image of the finished poster doesn’t do justice to the impact of Brian’s art, here is a detail: 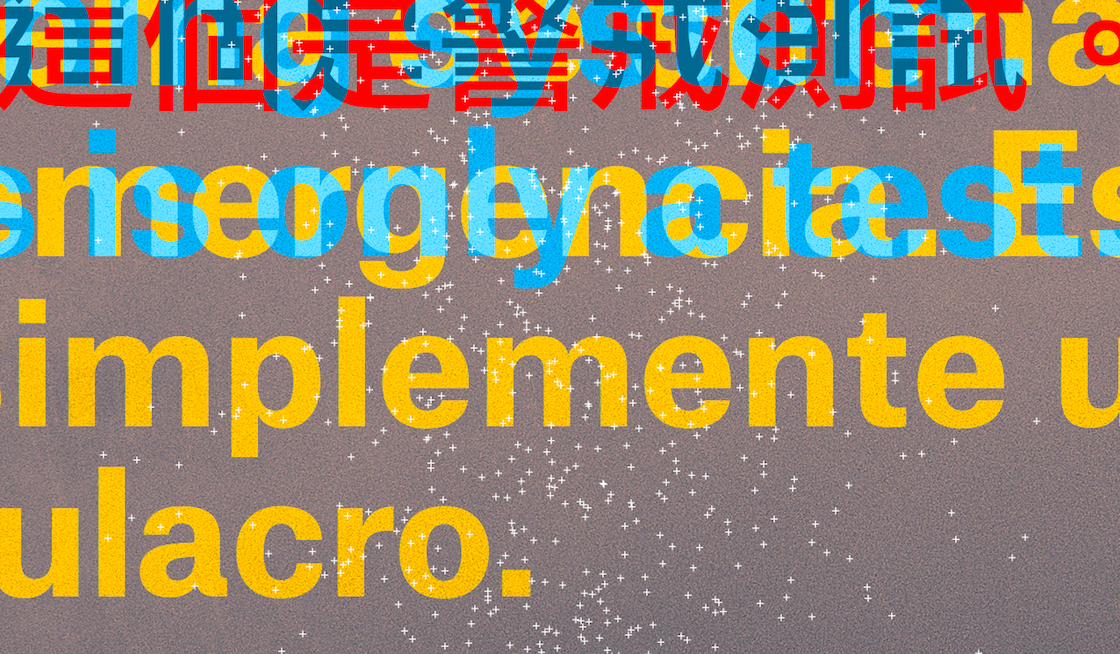 Our siren poster, by the the way, isn’t the only sonic symbol of San Francisco to be drawn from in the AIGA project. Nor is it even the only one to emphasize a public address system. Below is the wonderful poster submitted to AIGA by Jeremy Matthews and Brett Wickens of the San Francisco”“based Ammunition Group. It shows the bullhorn of famed local activist and politician Harvey Milk. 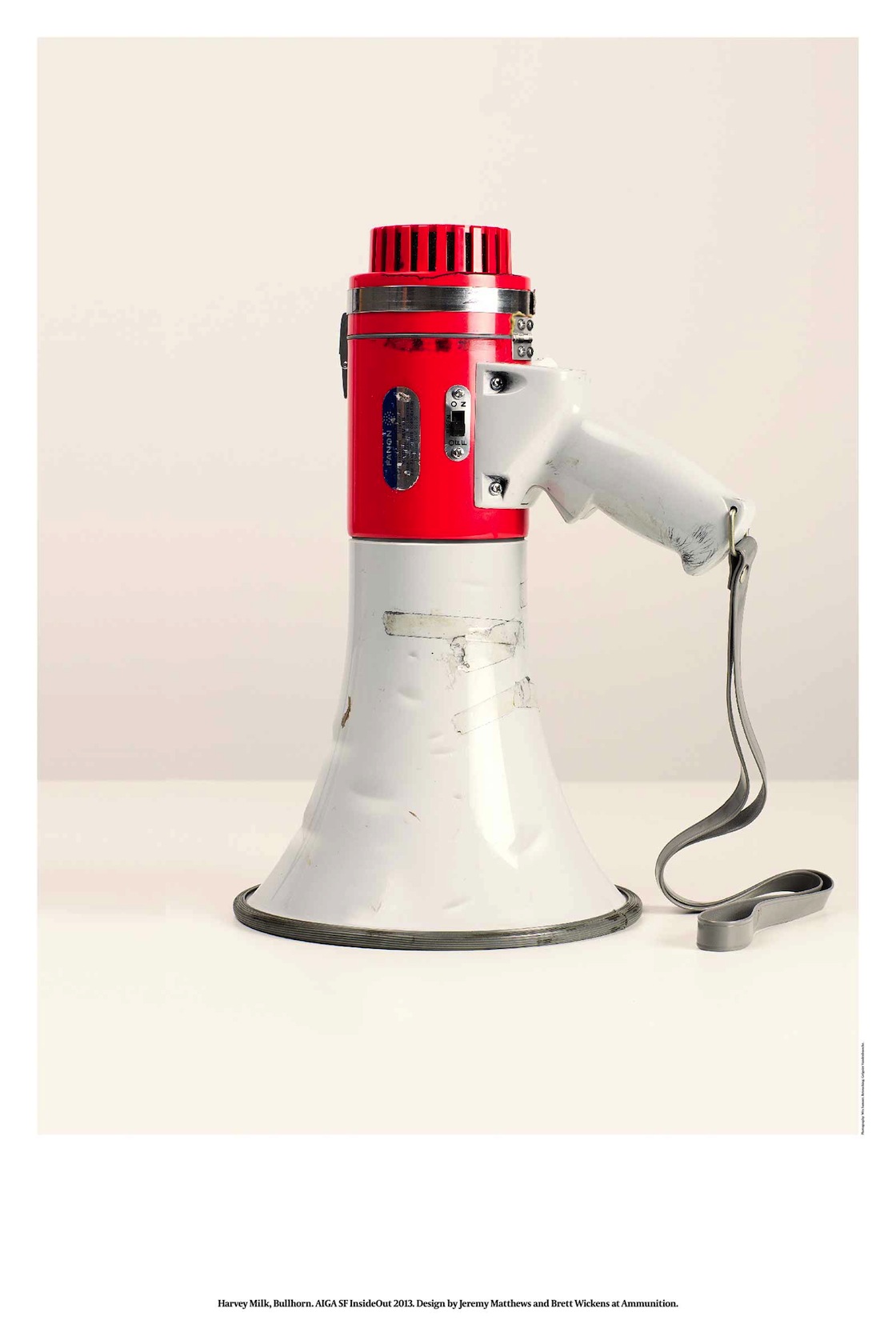 More on the AIGA InsideOutSF poster project at insideoutsf.org. The InsideOut SF Fall Gala, to be held on November 12, 2013, will raise funds for the AIGA (“towards scholarships, educational programming and community events” per the documentation) in an auction of the posters.