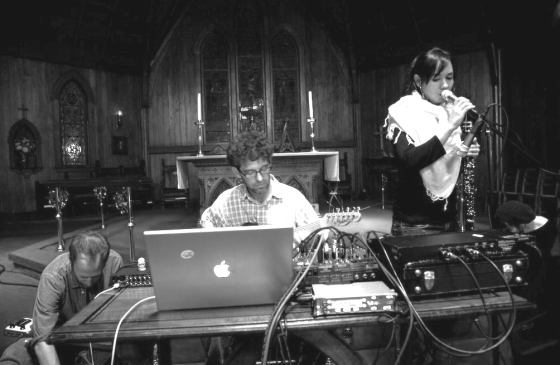 Sometimes one step backward allows for two steps forward. Stephen Vitiello has peeked back inside the inner workings of one of his best albums, Between You and the Shapes You Take (12k, 2013), for which he collaborated with Molly Berg, and rendered something new from it. The original featured Berg on clarinet and vocalizations — that is, on vocal sounds, rather than lyrics — with Vitiello on guitar and an array of electronic processing. Here the source audio is whittled to a short five minutes of percussive, jittery vowels, bouncing like balls in a pixelated pachinko machine. At times it’s hard to tell where her sounds end and the featured bell-like tones begin. What’s especially beautiful about Vitiello’s processing is that even as he pushes her utterances deeper into a fractured zone, he retains some textural essence of her tone, her delivery, her presence.

Hahn Rowe, violinist long ago of the band Hugo Largo, whose quiet sound was an important precursor to today’s pop-minded ambient minimalism, guested on Between You and the Shapes You Take, though it’s unclear if any of his efforts surface — or are subsumed — here in this Vitiello reworking.

Track originally posted at soundcloud.com/stephenvitiello. More on Between You and the Shapes You Take at 12k.com. More from Vitiello at stephenvitiello.com. Above image of Vitiello (center) and Berg (right), performing with Steve Roden (left), courtesy of 01sj.org.