You have to listen fairly closely to hear the birds, but chances are that no matter how closely you listen, you won’t do so with the fully committed simpatico of pianist Diane Moser.

That’s Moser on piano in the audio, responding to what she reports are a chipping sparrow and a black capped chickadee. The track is barely a minute long, but the give and take between human and avian collaborators is so charming, it’s the sort of thing you put on repeat and let the marvel of it erase whatever negative concerns you may have about humans and the environment. The percussive play of her piano, the little filigrees she emits, match the birds’ singing, not just in shape and key, but tonality and presence.

This isn’t a momentary flirtation for Moser, who posted a second track (“Dancin’ with Sparrows McD beginnings”) the same day. She’s released a whole album dedicated to the approach (Birdsongs, with Anton Denner and Ken Filiano). In describing the experience at a residency that led to Birdsongs, she wrote: “Every day I improvised with the birds outside my studio in the woods. I really just wanted to be a part of their ‘band,’ and was hoping I wasn’t too intrusive.” That temperament, that quality of listening, is a hallmark of her more recent bird play-alongs as well.

Track originally posted to soundcloud.com/diane-moser. More from Moser at dianemosermusic.com.

Been awhile since the cellist Julia Kent had a mention here, and thankfully there’s a new release, providing good reason. “Salt Point” isn’t truly new. It’s one of two previously unreleased tracks that will appear on the forthcoming expanded, vinyl edition of Kent’s 2011 album, Green and Grey, alongside the four tracks off Last Day in July, which came out the year prior to Green and Grey.

“Salt Pond” is a lush slice of what has come to be called neoclassical. That’s an interesting term in how it has transitioned over time. It used to mean sort of the opposite of what it now means. It once meant contemporary work that had obvious roots in the past, work that strove for a semblance to antiquity. Now it tends to mean work that explores the instrumentation and timbres of classical music, but in a distinctly modern manner. In other words, the “neo” has become something of a modifier; what once refuted modernity now embraces it. Often neoclassical means melodic minimalism, which is interesting since minimalism can be understood to stand in contrast with neoclassical.

Anyhow, the terms aside, “Salt Point” is a generous mix of pulsing drones and pointillist strings (Kent is foremost a cellist) that bring to mind the use of delays in dance music, albeit slowed to a lounge’s speed. At its climax, “Salt Point” almost loses itself, beautifully so, in a rapture of echoes. There’s also an official video for the track up on Kent’s YouTube channel, full of images from nature, overlapping and sometimes manipulated, not unlike her cello. It was made by Jola Kudela:

More from Kent at juliakent.com. The album is part of the November 29, 2019, Record Store Day. Details at recordstoreday.com.

On a totally separate note, while watching Watchmen last night I wondered, What if Damon Lindelof wrote a comic? And then remembered he had: the six-issue series Ultimate Wolverine vs. Hulk, illustrated by Leinil Francis Yu. Didn’t find much that would provide insight into the Watchmen adaptation, but did come across this sonic sequence. 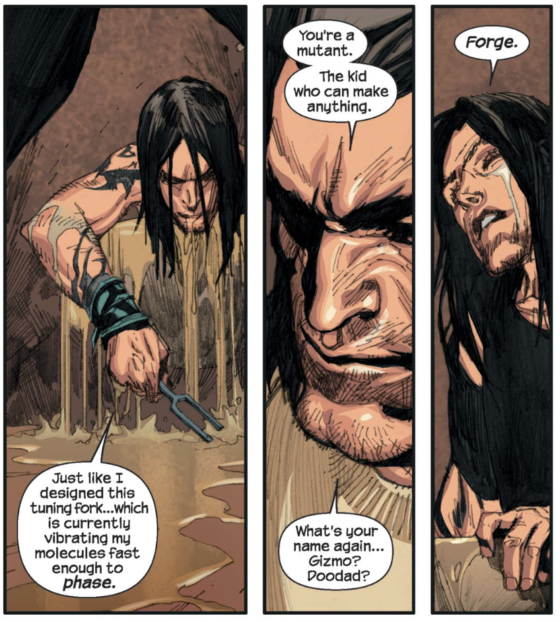 "Eutow" as a sludge mantra, courtesy of Sonance

It’s been about 20 years since Autechre remixed Tortoise, taking the latter’s chamber post-rock and reshaping it with digital tools. In the process of producing “Adverse Camber” / “To Day Retreival” (Thrill Jockey, 1998), they located correspondence in the two groups’ mutual emphasis on rhythm, texture, and tonality, as well as on how the tools and techniques of pop music can push into challenging new territories.

The Bristol, England-based band Sonance returns the favor this month, applying its progressive doom-metal apparatus to a cover of “Eutow,” off Autechre’s 1995 album, Tri Repetae. The track was posted to Bandcamp as part of a Sonance collection titled Remix and Cover. The wafting start of “Eutow” is reproduced with guitars and bass. It’s meatier than the source material, and also slower, pleasingly so. The Sonance version is about a minute and a half longer than the original, despite forgoing much of its interior development. Gone entirely, for example, is how Autechre’s “Eutow” ups the pace mid-song. (One might draw a comparison to how Autechre’s covers of Tortoise’s “Ten-Day Interval” virtually eradicated the percussion of the original.) Sonance revels, instead, in a blissfully sludgy rendition of the underlying foundation of the Tri Repetae track, treating it like a mantra to be set on repeat and adhered to, getting all the more hypnotic as it unfolds.

Track originally posted at sonance.bandcamp.com. More from Sonance at instagram.com/sonancenoise, where a recent shot of a Make Noise 0-Coast synthesizer suggests Sonance’s next Autechre cover may sound even closer to the source material.

Looking for the Comic in Watchmen

Can TV be as structurally rigid as the original comic?

I caught up with the Watchmen series on HBO last night, episode three. Easter eggs and character references aside, it remains very much a Damon Lindelof creation, which is to say, like Lost and The Leftovers, it’s very much in the early-stage process of flooding the screen with mysteries that will, over time, be sorted out, presumably.

I’m old enough that I read the original Watchmen, written by Alan Moore, when it first came out. That 12-issue series was, combined contemporaneously with The Dark Knight Returns (written by Frank Miller), the comic that got me back into reading comics during college, after I took a break from them toward then end of high school. What really captured my imagination in Watchmen the comic wasn’t just the story, or the critique of superheroes, or the meta-narrative, but the structure on the page. Its famously rigid grid and the use of visual motifs, most notably the blood-specked smiley face, gave it a formal self-consciousness unlike any comic I recall having read before. By the time I read Watchmen, I had ditched computer science as my college major and focused on English, which is to say literature. Watchmen was a playground for a mind currently being trained to observe how texts function.

I came to the Lindelof sequel (extrapolation? spin-off? fork?) wondering how that formal quality would carry over. The HBO series has story, and critique, and meta in spades. The structural features, however, haven’t been anywhere near as present as they were in the comic. Sure, the first episode had lots of circles (reminiscent of the smiley-face pin), and the third episode connected the shape of a certain Dr. Manhattan device with the shape of vestibules that people enter so as to send messages to Dr. Manhattan (in other words, insertion goes both ways). But the show is, ultimately, a TV show. It hasn’t in any way reduced or simplified its storytelling devices the way the original comic did. If anything, it draws fully from the peak-TV toolkit: big name casts, movie-grade camerawork, an utter dismissal anything episodic.

All this was on my mind last night as the episode (“She Was Killed by Space Junk”) played. The world outside my window got darker, and the street quieter, and thus the show louder. I lowered its volume, and eventually turned on the captions. Which is when quite suddenly, Watchmen, for the first time, really reminded me of a comic book: 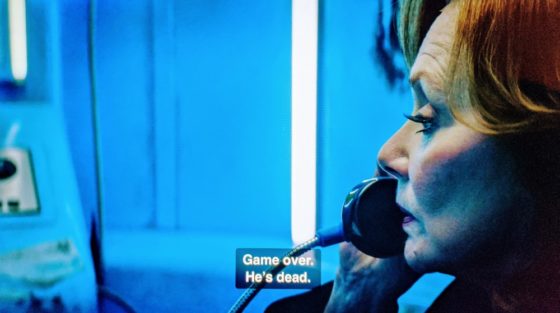 I was already a bit soured on the extent to which the series is, in any way, wrestling with the formal qualities of the original comic (credit shared by Dave Gibbons, its illustrator). Now I wonder how the show might, creatively, engage with captioning, not merely as a point of connection with comic-book techniques, but as a relatively untapped element of TV narratives. I feel like if Alan Moore (long story, yeah, never happening), or Denis Potter (well, dead), or Terence Davies (OK, it’d be a little slow for the intended audience, but I’d love it), or Jane Campion (aside: just imagine the Michael Nyman score), or Peter Greenaway (ditto) were tasked with adapting Watchmen for TV, captions would have been embraced before the first meeting of the writers room broke for lunch.