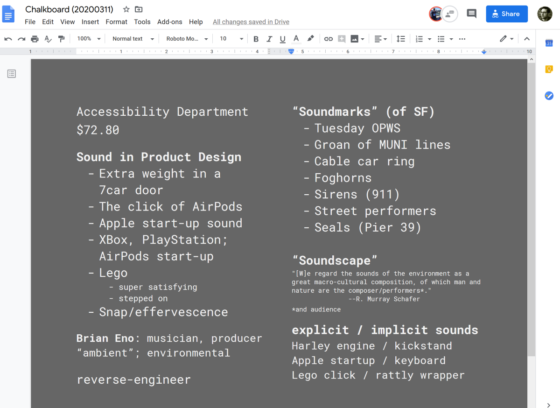 This post will be out of order when I catch up with recent weeks, but it’s timely, and I don’t want to delay. Countless educators around the planet are quickly needing to come up to speed with how to translate an in-person class to an online class. My case is fairly straightforward, as it’s lecture/discussion-based. I did find my “virtual chalkboard” to be very useful, and I hope that others do, too.

Remains of the day: The university where I teach in San Francisco moved classes online as of today, resulting from COVID-19 precautions. The students and I met at noon for Sounds of Brands, week 6 of 15, via video conference. I thought there would, as a result, be no chalkboard to share afterward. But then I realized, shortly before our first online session, that I might employ a shared Google doc as a virtual chalkboard. I found it worked quite well. For one thing, it gave students something to look at other than my (along with each other’s) face. For another, it kept things focused, allowing me to collate their input in real time. I think without this virtual chalkboard I would have ended up with less discussion, because their unrecorded responses would have felt fleeting. The approach worked great.

This week’s class was part of the second of the course’s three arcs. The first is Learning to Listen. The second is the arc from which the course takes its name: Sounds of Brands. Today we discussed the role of sound in product design. This isn’t a complete summary of the day’s session. I just want to unpack a bit, as a series of line items, what’s on the virtual board:

“Accessibility” is the department at the school where students can reach out if they need support, which I imagine might be the case right now.

The “$72.80” is from a story I told the students. I wanted to share, at the start of class, a disruption I had myself experienced during college. I mentioned how my first semester at school, much of the non-teaching staff went on strike. That $72.80 is what our tuition included for food. We got that amount back weekly to feed ourselves. I talked about the negatives (for example, having elected to spend most of the money on used records, I ended up quite ill by Thanksgiving), but also about how this bonded our class through the mutual support we provided each other.

The list on the left (“Sounds in Product Design”) is examples students shared. I talked through a variety of topics, including how Harley-Davidson once tried (and failed) to trademark its engine (the big on “reverse engineer” arose from this, as well), and how Brian Eno made a Windows start-up sound on a Mac. None of the students (this is toward a bachelor’s degree) had heard of Brian Eno, so there are some notes in there about who he is.

I then shared a bunch of R. Murray Schafer’s thoughts and writing on sound: first, a 1972 Canadian government document in which he defined “soundscape” (derived from “landscape”) and then language from Tuning of the World on the “soundmark” (from “landmark”). The “Soundmarks (of SF)” list is of sounds the students said they associated with San Francisco as among the city’s soundmarks. One neat aspect of this virtual chalkboard is that I could fix spelling and reorder material.

After the students listed their soundmarks, I then reordered the entries in what I thought of as ranging from sonically unique to the city (the Tuesday public warning system, currently on hiatus) to the non-unique yet still closely associated (seals). That quote under “Soundscape” is Schafer’s definition, and we discussed how the word “audience” might be added to it.

The last bit is in the lower right. We discussed the difference between “explicit” and “implicit” sounds relating to products and services. The idea is to apply Schafer’s concept of the soundscape (and related concepts that didn’t make it to the chalkboard) to things and the environment in which those things are utilized. (For example, the sound of a kickstand, the rumble of tires on pavement, and the noise of wind are all part of the Harley-Davidson experience.) Those three examples on the chalkboard were ones students contributed to the discussion.

Anyhow, with about 40 or so hours’ notice to prepare the transition, that’s my first video-conference teaching summary. Class met for three hours. It went OK. I’m used to pacing, and I had to sit still. I’m used to drawing and writing on the chalkboard, and had instead to just type. I’m used to lots of things, but it went OK, and it’ll go better next week. One student showed up in our video conference about 15 minutes early for class, when I had the chalkboard on default: black type on a white background. Spur of the moment, I reversed the colors, so it began to resemble an actual chalkboard. The student agreed it was an improvement, so I stuck with it.