▰ Despite the title “Patch Notes,” this 15-minute video by Lucrecia Dalt is not a tutorial. It’s a full performance, a mesmerizing one, for expertly processed voice. Dalt is based in Berlin, Germany.

▰ “Origin High Brazil” is dense drones, somehow both orchestral yet solitary, from Parker Weston of Phoenix, Arizona. It’s the second track off the Enohpoxas Blews album, recored by Weston under the PKWST moniker: 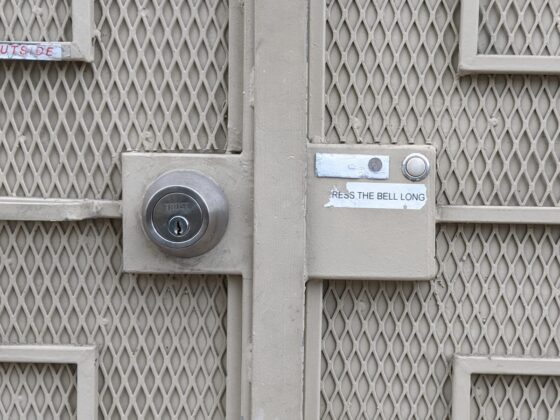 There is a certain irony to the word “press” having been worn off. Especially in such close proximity to the bell that the noun references, and especially since the phrase “the bell” shows no particular sign of ware. Nor, for that matter, does the button itself, the button one hits to ring the bell. So, two questions:

First, what is that circular item directly above the words “the” and “bell”? It looks like some sort of small coin, a mark of a secret organization, an emblem of some rank or other. Is it a form of welcome to those who recognize it?

Second, about that word “long”: It’s an adjective, not an adverb, and the fray to its right suggests, in parallel to the fray on the far left, that perhaps there was another letter there, though the shadows of the doorbell casing do taper off quickly. Would it have said “longy,” which is not a word? Would some letter have completed this phrase? Did the writer belatedly deem the grammar an issue, seek to remove it, and only get this far? The visitor has much to ponder in advance of the gate being opened.

Lost in the wires 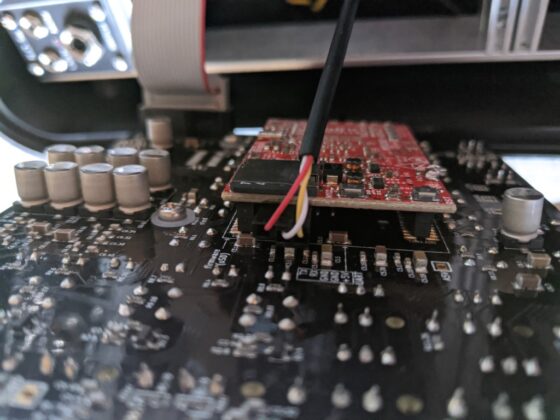 There haven’t been any Buddha Machine Variations in a few days, but there’s been a lot of activity, some of it futile (thus far), but progress is being made. This is a cable intended to connect the ER-301 module to a 16n faderbank via i2c, a nearly 40-year-old data transfer system (see wikipedia.org). I use the word “intended” because so far the connection is befuddling me.

Without losing the functionality 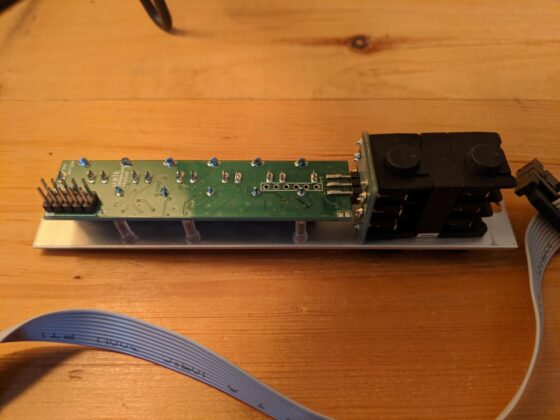 Customary rear view of printed circuit board before the device returns to the generous pool of second-hand synthesizer modules. This is the Monome Walk (Monome being the manufacturer, Walk the module), so named because it lets you attach two foot pedals to send triggers and the like. It’s a great module, but I got two smaller modules that accomplish much of what it is useful for, and it’s time for a change.

Over 165 people have expressed interest by signing up via the Google Form posted a couple days ago. For reference, there are currently 1,573 subscribers to the Disquiet Junto email list, and likely there is substantial overlap between the two lists. I may create a standalone list for the Silent Film project, but for now the Disquiet Junto email list will do double duty. In the next week or so, the first film and the participants for that scoring project will be announced, as will plans for subsequent films as well, at least one of which will follow shortly thereafter.

Initially the plan was maybe 20 people or so would sign up, and we’d do a single film. When that number quickly became 40, and then 60, perhaps we’d do three films at once. As the number topped 100, even allowing that many people may not end up having the time or interest when the dust settles, a more deliberate approach came into focus. There are many ways to tackle the collaborative scoring of a public domain film, and so we’ll do multiple projects over a period of time exploring those different strategies. We’ll do one in which very little information is shared. We may do one exquisite-corpse style, where each participant builds on what came before. We may do one where a shared set of sonic resources are made available. And so forth. One thing all these projects will have in common is that the participants will have substantial time to complete their work, in purposeful contrast with the standard four-day turnaround of the weekly Junto projects.

And that covers it. It’s very exciting to have the Silent Film series to cogitate on and act on during this continued state of mutual self-isolation. It is, indeed, a cliche at this stage to belabor the benefits of long-distance connection, but it is not to simply note them, especially because they have been core to the concept of the Disquiet Junto ever since it was founded back in January 2012.