These are the sort of items I’d usually put in the This Week in Sound email newsletter (tinyletter.com/disquiet), but I’ve been super busy, too busy for a new issue, and so at a friend’s suggestion I am initially noting some here.

▰ It’s good YouTube experiments with hiding dislikes. I’m not sure it’s just about creator ego or hate mobs. The interface is flawed. We’re used (post-Netflix) to dis/liking things to nudge the algorithm. Hiding lets users register taste without offending. (I wrote about this two years ago in “Speaking Privately to the Algorithm.”)
https://www.theverge.com/2021/3/30/22358992/youtube-hiding-dislikes-experiment-creator-review-bomb

▰ “Getting ‘vaxxed at moscone and they’re literally playing Here Comes the Sun on the PA and I’m shaking,'”: Peter Hartlaub quotes local food critic Soleil Ho at the start of this piece about the playlist at Moscone Center, one of the San Francisco Bay Area’s major vaccination centers. Her tweet was the first I’d heard of the music there, as well. I’m still ineligible for vaccination, but have been following along as folks tweet (and otherwise share) their shots. The playlist originated, interesting, not for patients but for administers: “it was initially created for staffers arriving early for their first day of work.” (via Daniel Raffel)
https://www.sfchronicle.com/local/article/Here-s-the-story-behind-the-amazing-Moscone-16061677.php

▰ Robocalls have altered our relationships with phones, both household and mobile. Good news: The FCC has been taking action. Less good: “A fine, even the biggest in the agency’s history, is unlikely to rein in robocalls. In fact, there’s evidence to suggest they haven’t been effective at all.” More good: “If there’s good news, it’s that the FCC isn’t limiting itself to fines. In a separate announcement, the agency detailed its new anti-robocall agenda. Acting Chair Jessica Rosenworcel has established a Robocall Response Team. Made up of 51 FCC members across six offices, the team will coordinate the agency’s anti-robocall efforts and develop new policies for it to put in place.”
https://www.engadget.com/fcc-225-million-fine-194419208.html

▰ We’ve been back on Mars barely a month and already introduced noise pollution: “It’s so noisy that Dave Gruel, the lead engineer for the EDL (entry, descent and landing mic) system, said he’d pull over and call for a tow if he heard these sounds while driving his car.” (And, yes, I first read that as Dave Grohl, too.)
https://www.engadget.com/perseverance-driving-on-mars-sounds-063118359.html

▰ Geeta Dayal surveys the past and future of music at Mills College, which has been home to such musical mavericks as Pauline Oliveros, Darius Milhaud, John Cage, Fred Frith, Steve Reich, Terry Riley, Laetitia Sonami, and Roscoe Mitchell, in light of the institution ceasing to grant degrees.
https://www.nytimes.com/2021/03/30/arts/music/mills-college-music.html

▰ You know how with each successive generation, ties to ethnic and cultural heritage diminish? It’s true of birds, too. “As the population of the critically endangered regent honeyeater plummeted over the years, some young birds could no longer find older ones to teach them to sing, a new study reports.”
https://www.nytimes.com/2021/03/17/science/bird-honeyeater-australia.html

▰ The Foghorn’s Lament: The Disappearing Music of the Coast, a new book from Jennifer Lucy Allen, is due out in later this year (May in the U.K., where she is based, and July in the U.S.). Allen received her PhD, with a thesis titled Fog Tropes: The social and cultural history of the foghorn 1853 to the present day.
https://www.hachette.com.au/jennifer-lucy-allan/the-foghorns-lament-the-disappearing-music-of-the-coast

▰ Whale song can be used “to map undiscovered faults through tectonic sound recordings of the sea,” Geoff Manaugh notes from paper in Science. https://www.bldgblog.com/2021/03/cetacean-surroundsound/

I’ve been enjoying the new season of Mayans M.C., the first following the exit of co-creator Kurt Sutter. The fourth episode aired last night. The show continues under the stewardship of Elgin James, its other co-creator. Part of the new tone is due to the arrival of composer David Wingo, replacing Bob Thiele Jr. That new tone is set from the start by the new opening credits, which have gotten attention for their political imagery, not just the real-world source material, but the historic scope.

Wingo’s theme music is just as big a shift from the earlier seasons. Gone is the song co-written by Thiele and Sutter, sung initially by Los Lobos’ David Hidalgo, and then the second season by Diana Gameros. In its place, Wingo has crafted a compact, moody instrumental track that lingers just below 70BPM. It’s all atmosphere, built from layered guitar parts, moaning group background vocals, and plenty of percussive elements, all rendered as slow-burn drone rock. While not quite as diffuse as, say, the ambient folk and country of groups like Boxhead Ensemble or SUSS (the latter of whose Gary Leib died last week), it sits well alongside them.

Wingo’s name wasn’t immediately familiar to me, but as it turns out, I’ve heard a lot of his music in the past. He composed material for Soundtracker, the excellent documentary on field recording artist and acoustic ecologist Gordon Hempton, co-author of the book One Square Inch of Silence: One Man’s Quest to Preserve Quiet. We discuss material from Soundtracker most semesters I teach my “Sounds of Brands / Brands of Sounds” course. He also wrote music for Manic, the (pre-500 Days of Summer) pairing of Joseph Gordon-Levitt and Zooey Deschanel that made excellent use of some Aphex Twin music, as I wrote about in my book on Selected Ambient Works Volume 2, for which I interviewed its director, Jordan Melamed. Wingo has worked on the scores for Heaven’s Gate: The Cult of Cults, Barry, Mud, The Report, and numerous other productions, dating back to David Gordon Green’s 2000 debut feature film, George Washington. He also led the Austin, Texas, band Ola Podrida.

More from Wingo at david-wingo.com.

With a SoundCloud stream

After a bit of a SoundCloud dry spell, when Japanese musician Corruption seemed to spend much of the time posting collections of older tracks at Bandcamp, the steady stream is back, from ragged video game exotica (“Amuse Myself”), to elastic drones (“Worm Fat”), to jagged metallic noise (“Outdoor Indoor Edit”). Corruption is incredibly prolific, with well over 1,100 tracks to date on the account. Tune in at soundcloud.com/corrption. A particular recent favorite is “Khakkhara,” named for the noise-making zen Buddhist staff, yet here sounding like a empty train barelling through a science fiction movie.

Algorave Review in The Wire 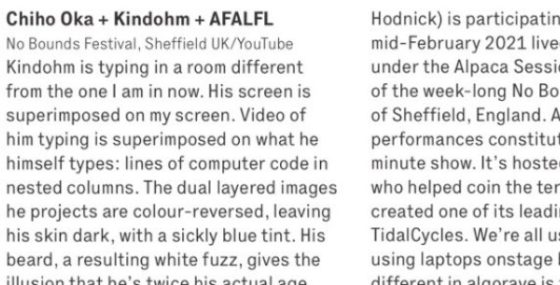 Yeah, that typeface means something. I’ve got a new piece in the Wire magazine, the issue with (musician) Warren Ellis on the cover. It’s a review of a livecoding livestream from February 13, 2021, of Chiho Oka (Tokyo), Kindohm (Minneapolis), and AFALFL (Paris), hosted by Alex McLean as part of the No Bounds Festival. There’s something quite digitally native about a livecoding livestream. Had algorave not already existed, Covid-19 certainly would have engendered this cultural variant.

McLean posted the full review at slab.org. The concert is archived on YouTube:

Ambient music by Lesley Flanigan, Dave Seidel, KMRU, Celia Hollander, and John Hooper plus an interview with Flanigan, commentary, and a short essay about reading waveforms

This is the fifth episode of the Disquietude podcast of ambient electronic music.

The goal of the Disquietude podcast is to collect adventurous work in the field of ambient electronic music. What follows is all music that captured my imagination, and I hope that it appeals to your imagination as well.

All five tracks of music are featured with the permission of the individual artists or record labels. Below is the structure of the episode with time codes for the tracks, the spoken annotation of the tracks, an interviews with one of the musicians (Lesley Flanigan), and a brief essay about reading waveforms.