I do this manually each Saturday, collating most of the tweets I made the past week at twitter.com/disquiet, which I think of as my public notebook. Some tweets pop up sooner in expanded form or otherwise on Disquiet.com. I’ve found it personally informative to revisit the previous week of thinking out loud. This isn’t a full accounting. Often there are, for example, conversations on Twitter that don’t really make as much sense out of the context of Twitter itself. And sometimes I tweak them a bit, given the additional space.

▰ Thanks to the patient assistance of my longtime social media spirit ally, the wise C. Reider, I’ve boarded the Mastodon. (Note: I no longer use the account I listed in the original tweet. It’s a long story. This thread provides some sense of the series of events, and my confusion, which has since been dealt with, had nothing to do with C. Reider’s help, which was great.)

▰ OK, music theory nerds, hit me with your mnemonics for modes, ’cause my head hurts trying to keep ’em straight.

▰ “Marc, you signed up for Mastodon, so why aren’t you posting?”

“I posted yesterday, and the stuff disappeared, as did all my profile information and images.”

“You should sign up for a less popular server.”

“I tried to. I had to apply and haven’t heard back.”

“You should just refill your profile material.”

“So, I’m gonna wait for the popularity to chill, and then see if the thing is working.”

▰ Mastodon, ’cause it’s old and slow but potentially powerful. In any case, now I’m at @[email protected] (Not loving the vibe around the word “lurk” but so be it. Friends say it’s an OK hang.)

▰ OK, I deleted my mastodon.social account. Who knew mastodon.social is different from mstdn.social? (Fun fact, my first online instance — not counting BBS — was ~mrcwdnbm on some ancient 1993/1994 FTP site.) Anyhow, now I know. I’ve deleted the one with he vowels.

▰ Er, with “the vowels.” I managed to delete a consonant while trying to talk about deleting vowels. This is what Mastodon’s complexities have done to my brain.

▰ Mostly been using my own photos for the Disquiet Junto projects lately, but I used a public domain one for tomorrow’s. Looks pretty nifty, I think.

▰ OK, in the interest of simplicity, I’m just at @[email protected] for Mastodon activities. I’ve deleted both mastodon.social and my mstdn.social accounts (have no idea how I ended up with both, except that this whole process has been very confusing).

▰ A piece of the puzzle: 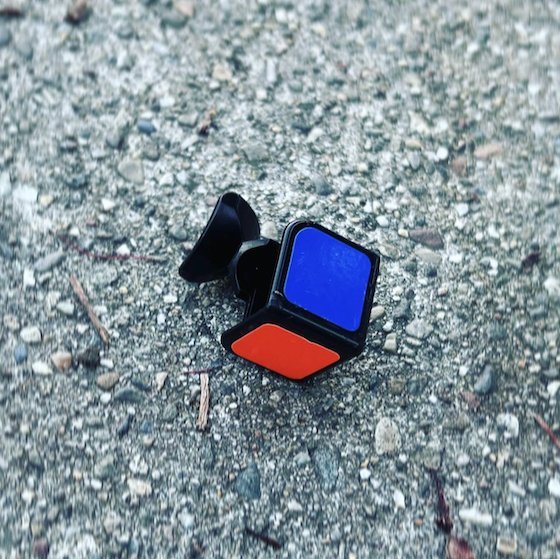 ▰ Been (back) on Mastodon 48 hours and every time I see the word “federated” I think 🖖.

▰ The summary statement of the Mastodon “community” (I’m still learning lingo) I’ve currently settled on: “Welcome to post.lurk.org, an instance for discussions around cultural freedom, experimental, new media art, net and computational culture, and things like that.”

▰ 7:34am: I somehow have three different Mastodon accounts. Nothing works.

12:38pm: I’m down to one account. This interface is more opaque than it needs to be but I’m OK with it.

3:32pm: It’s still a bit confusing but I haven’t been confused online in a while so let’s go with it.

▰ Reflecting on how I found Mastodon very confusing for two days, and how now I don’t. You’ve truly passed through a window when you can’t quite recall the reasoning for why something had been, quite recently, not just confusing but downright irritating.

▰ Twelfth novel I finished reading this year: a hunk of lightness in the form of John Scalzi’s The Kaiju Preservation Society. Read the author’s note first. It sets the right expectations for a book about bio-nuclear shenanigans, quick camaraderie, executive greed, and being the least educated person in the room.

▰ Me at the start of the week: Mastodon is excruciatingly complicated and whatever my head hurts.

Me at the end of the week: writes a 2,000-word email to friends helping them understand it by tracing my own walk through the conceptual window.

Watched Gattaca for the first time in forever and it’s an even better movie than I’d recalled — a movie where its economical use of locations is matched by its tightly scripted approach. Bonus points for the Michael Nyman score.

Speaking of Nyman, extra bonus points for a peek into the alternate ways that post-human life has been designed in the world of Gattaca. It’s not all cool-as-cucumber starship navigators. 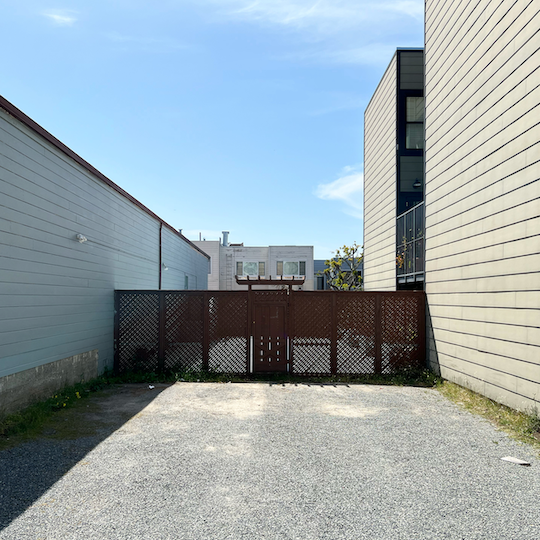 The geometry of the Altar of Concrete

The Assignment: Let your slow breathing guide a piece of music. 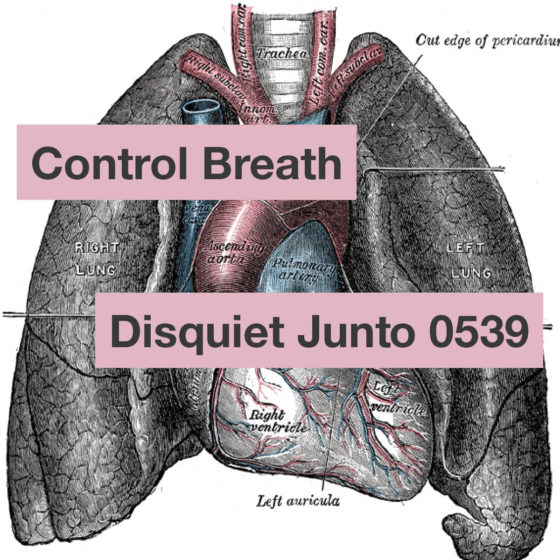 Step 1: You’re going to record a piece of music in which not just the pace but the shape of your breathing will provide the foundation. Plan to do so with slow breathing.

Step 2: Spend some time just breathing, and paying attention to the breath. Locate a pace that is comfortable to you

Step 3: Best you can, record yourself breathing. It might take time to get the sound right. Record at least a few minutes.

Step 4: Listen back to the breathing you recorded in Step 3.

Step 5: Make a piece of music using the recording from Step 3. Retain the recording in your new piece of music. The sound of you breathing doesn’t need to be prominent, but it should both provide the shape and pace of your work, and at least occasionally be audible.

Eight Important Steps When Your Track Is Done:

Step 1: Include “disquiet0539” (no spaces or quotation marks) in the name of your tracks.

Step 2: If your audio-hosting platform allows for tags, be sure to also include the project tag “disquiet0539” (no spaces or quotation marks). If you’re posting on SoundCloud in particular, this is essential to subsequent location of tracks for the creation of a project playlist.

Step 8: Also join in the discussion on the Disquiet Junto Slack. Send your email address to [email protected] for Slack inclusion.

Note: Please post one track for this weekly Junto project. If you choose to post more than one, and do so on SoundCloud, please let me know which you’d like added to the playlist. Thanks.

Length: The length is up to you. Slow often works best when it’s slow and long.

Title/Tag: When posting your tracks, please include “disquiet0539” in the title of the tracks, and where applicable (on SoundCloud, for example) as a tag.

More on this 539th weekly Disquiet Junto project — Control Breath (The Assignment: Let your slow breathing guide a piece of music) — at: https://disquiet.com/0539/

Trying out a new social media hub — new to me, that is

7:34am: I somehow have three different Mastodon accounts. Nothing works.

12:38pm: I’m down to one account. This interface is more opaque than it needs to be but I’m OK with it.

3:32pm: It’s still a bit confusing but I haven’t been confused online in a while so let’s go with it.

Mastodon is an interesting choice of name for an online community platform. To begin with, the ancient animal is extinct. In addition, the beast looms in the imagination as potentially slow, perhaps even cumbersome — if, yes, fierce and proud. Also: powerful. So it’s got that.

In any case, I’m still at twitter.com/disquiet, posting regularly about the occasional bit of writing, as well as stray sounds that float by my desk, plus screenshots (pageshots?) from what I’m reading. I’ve tried many social networks over the years, and in fact when I logged onto Mastodon this week, I quickly realized I’d been there before. Perhaps twice, even. Soon enough, I accidentally (because Mastodon is many things, none of which are straightforward) had three simultaneous accounts in different communities of Mastodon, two of which had unhelpfully similar names.

I’ve finally settled on a community called lurk.org. The name is a bit concerning, but friends tell me it’s a good crew, and contrary to impressions reinforced by Mastodon’s overly complicated onboarding process, you can see and participate in other communities, whatever your community may be — I type that sentence with caution, as I imagine there are communities that function more as walled gardens. I truly don’t know.

There is a lot of documentation to take in, including flowcharts (which as a friend pointed out, can truly resemble something out of Primer; like, if you make a post it only appears in other timelines — I mean communities — if someone there reposts it or comments on it, but maybe replies still aren’t visible?), and there is advice, both solicited and the other sort. Suffice to say, if anyone asks in a seeming rhetorical manner, “Why aren’t you just on Mastodon?” — well, there are plenty of reasons. Getting aboard is not straightforward. But about a day in, I found it began to click.

All of which is to say, if you’ve added Mastodon to your social media stack, then I am at https://post.lurk.org/@disquiet. For how long, I don’t know.