Philip Glass’s Score to ‘The Hours’ 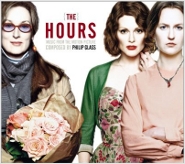 How better to score a movie that takes place in three tangentially related time periods than with music that strives for timelessness? The hallmarks of Philip Glass’s minimalism serve The Hours well. The film, based on Michael Cunningham’s novel, tells the stories of three women — Virginia Woolf in the early 1920s, a housewife just after World War II, and a book editor in the present — whose days relate in different ways to Woolf’s novel Mrs. Dalloway. Yet rather than construct a sonic montage of these three time periods (perhaps some Ravel for Woolf, some Max Steiner for the housewife, some Enya for the editor), Hours producer Scott Rudin turned to Glass, a contemporary-classical composer who has had a substantial side career in film, most notably with Koyaanisqatsi.

The familiar Glass sounds — the endlessly layered violins, the static melodies, the glacial rhythms — all lend a consistent aural foundation to a story that moves fluidly back and forth in time. The music is scored for orchestra, string quartet, and piano. Those plentiful strings lend a thick cushion, a triumph of tonal suspension, for the piano part, which Michael Riesman plays coolly, emphasizing what are often single notes separated by thoughtful silences, as well as short sets of scales cascading in slow motion. Not only will these compositional themes be familiar to fans of Glass’s work, so too will several of the melodies. Some sections of the score are derived from his albums Glassworks and Solo Piano and from his opera Satyagraha — which, incidentally, involved the stories of three legendary men active in different eras.