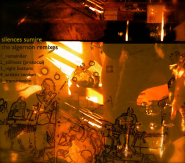 The act Silences Sumire released one of 2008’s best albums, a collection of heavily remixed jazz elements called Return Is Selective, on the digital arm of the Ropeadope record label. The extent to which Sumire, collectively Thomas Faulds and Charles Gorcyznski, was represented on Return not by the jazz but by the remixing and processing is emphasized on The Algernon Remixes, a free, five-track release they put out earlier (available for download at silencessumire.com as archives of both WAV and MP3 files).

The musically economical content of Algernon is jazzy only to the extent to which the rhythmic post-rock of Tortoise is jazzy, especially on the slow, gentle “Protocol,” which is built around a melody played on a mallet instrument. The best track is likely “Remainder,” in which the patient counterpoint and lead instrument (seemingly guitar) of the initial Algernon track are heard through a kind of digital scrim, which renders the original in a pixilated pantomime. More on the originating act, Algernon, at myspace.com/algernonmusic.